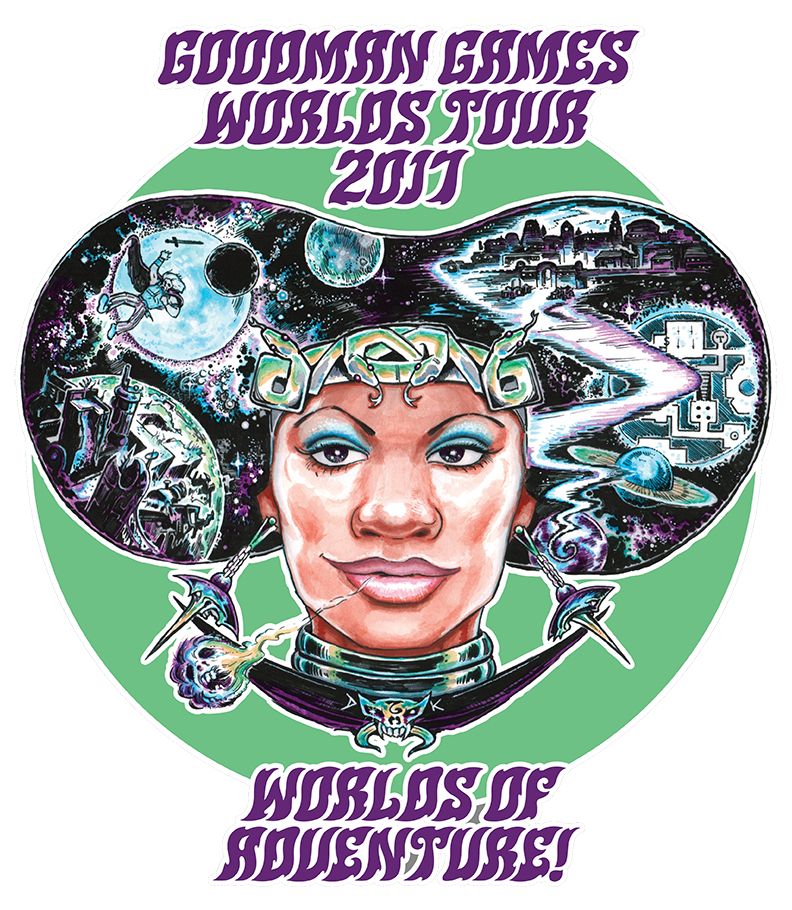 It’s time to start earning your swag! Once again Dungeon Crawl Classics calls to the faithful to bring 1974 gaming to the masses! Join the Road Crew and help us spread the good news: gaming is awesome again!

The Goodman Games 2017 World Tour is now officially up and running! Run games for any of the Goodman Games product lines and get cool stuff like bookmarks, dice, dice bags, character sheet pads, the coveted belt buckle, and so much more!

Will you join us as in our quest to own the roads and dominate the landscape? Organize, advertise, and judge a game of Dungeon Crawl Classics this year at a public venue. Run your game at a convention, game day event, FLGS event, local watering hole, or school gaming club. Join our Road Crew!

And what’s in it for you, besides your opportunity to ride with us forever through a thousand insane worlds? Swag! That’s right — the more games you run, the more neat stuff we send your way. We’ll also let you create your own personalized swag! Plus of course your name joins the other Immortals in the Road Crew.

How does it work? 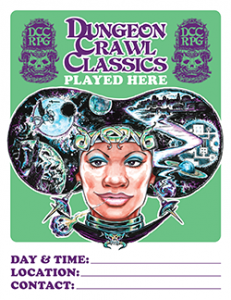 Simply run a game in a public venue, then order a Road Crew Pack through our online store. Each time you run a game, order another pack. You’ll get continually greater rewards! And they’re free for US residents. (International customers get the swag for free but have to pay shipping.)

Get your Worlds Tour 2017 flyer to advertise your Road Crew game right here!

What games can I run?

Send game recaps and photos of your Road Crew 2017 games to Road Crew Overlord Brendan LaSalle, and we may use your reports in future Worlds Tour 2017 publicity on this very website and social media.

Want to get into a Road Crew 2017 game as a player and receive some of this sweet swag by just showing up? Check out the Goodman Games judges who are appearing at conventions across the country in our 2017 convention schedule! 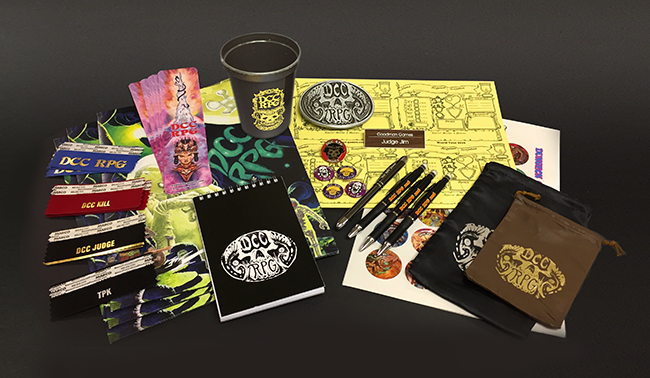 Tell me about the swag!

Gladly! Here’s what you get: 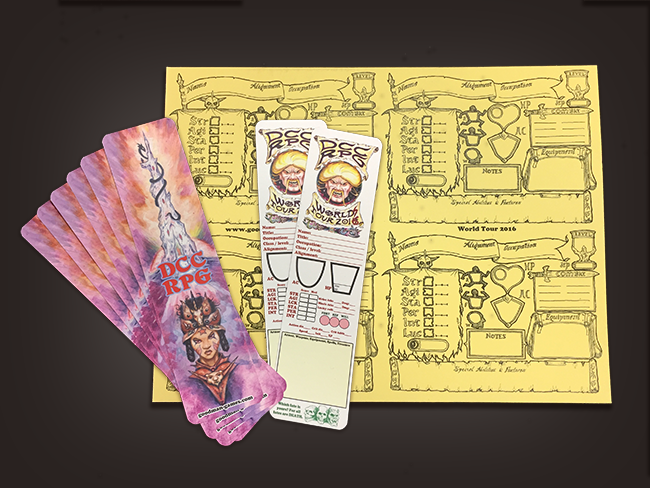 World Tour Game 2: A spiral notebook for the judge, and a printed character sheet booklet. 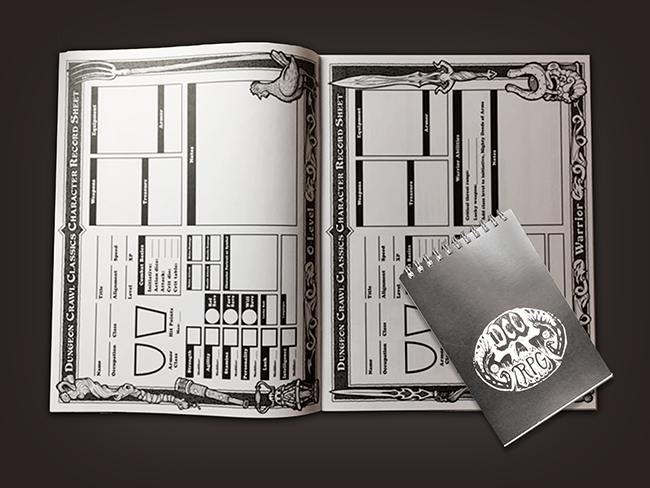 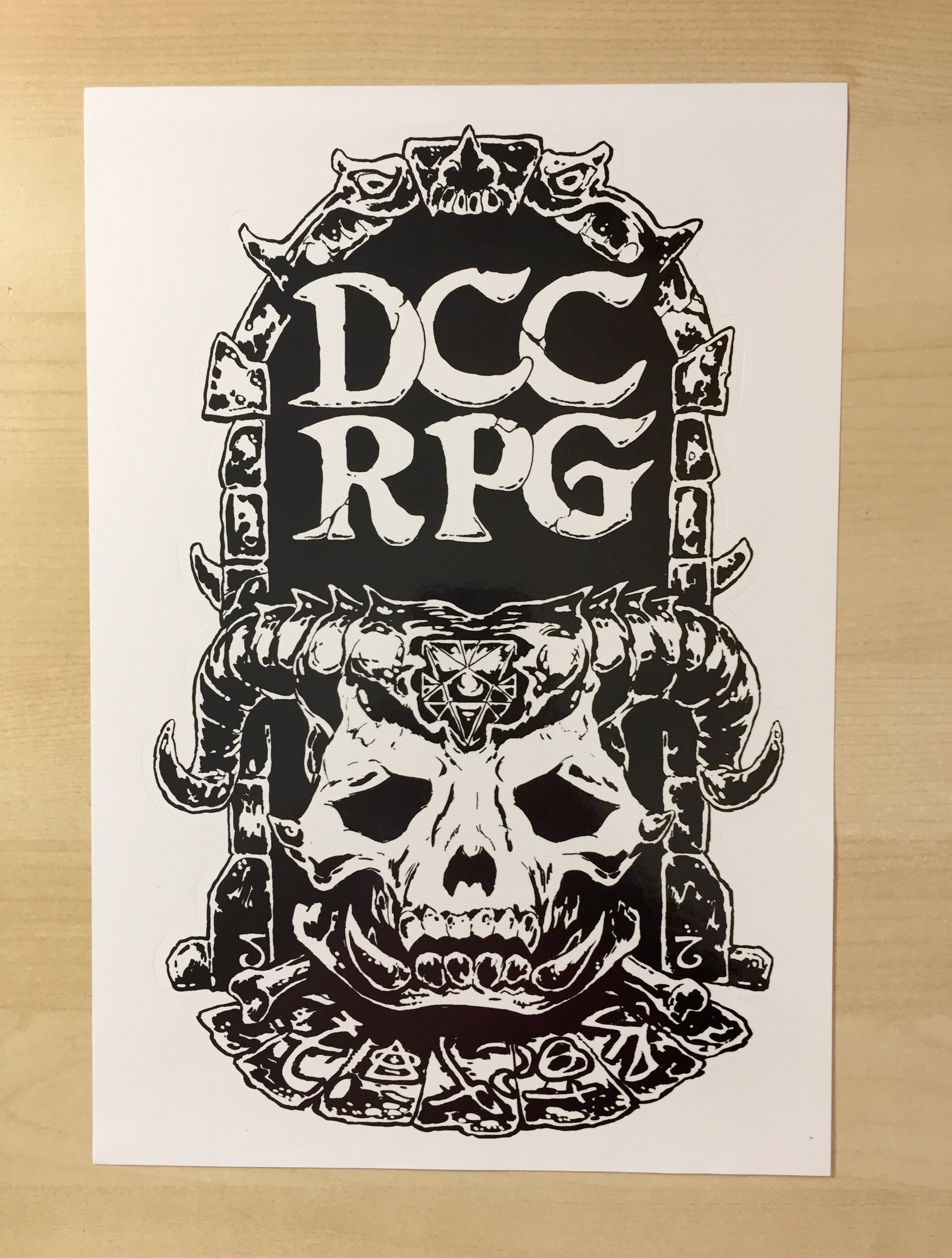 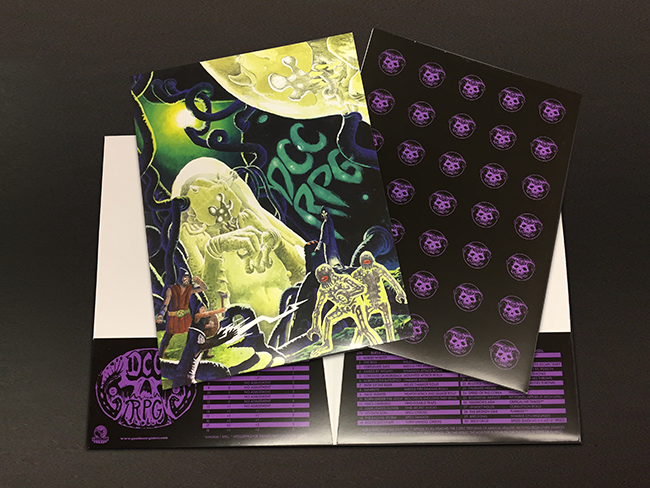 World Tour Game 6: A sheet of die-cut stickers corresponding to the published DCC adventure modules. Stick these on your character sheet pocket folder to tell the world what modules you’ve played! 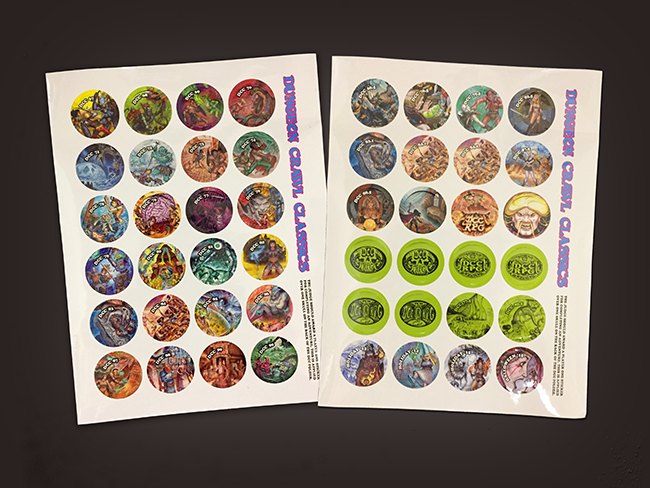 World Tour Game 7: A stack of mechanical pencils for the players! 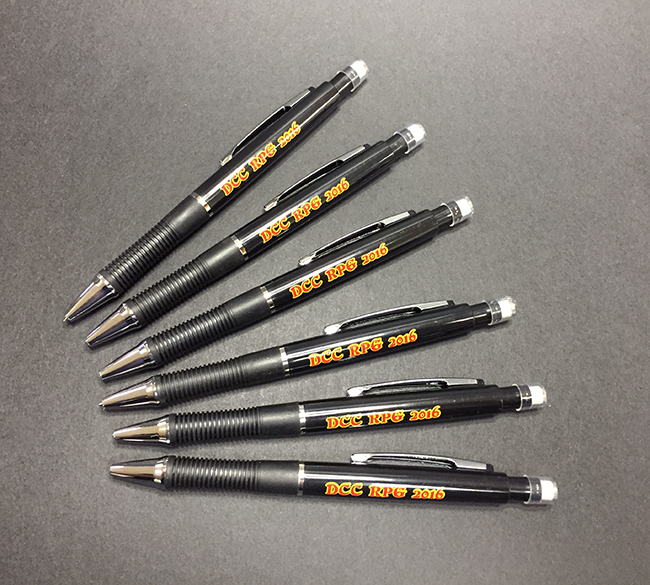 World Tour Game 8: A special pen just for the judge. 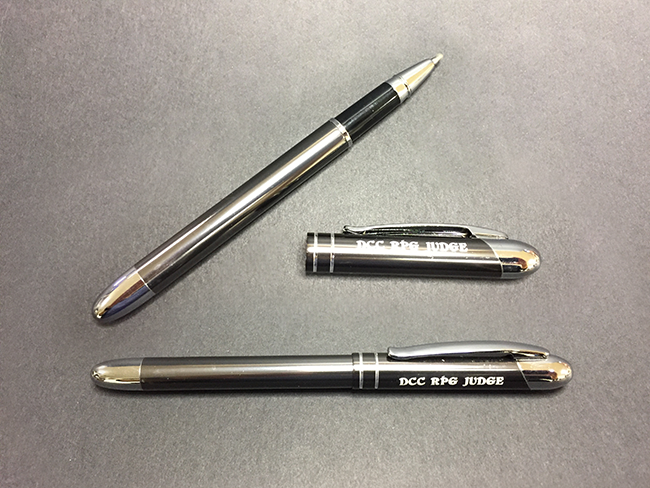 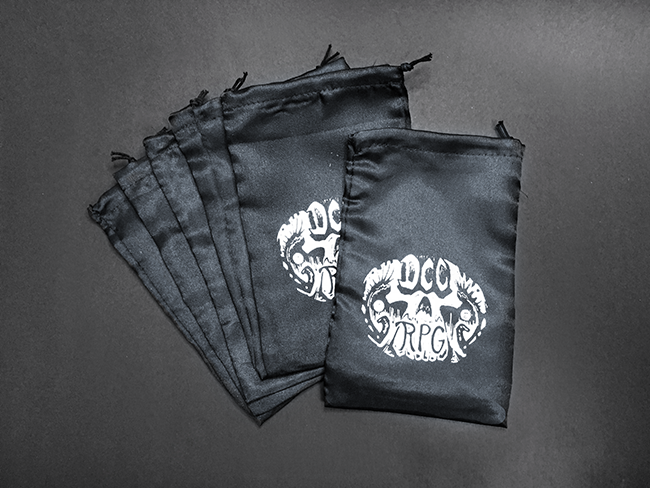 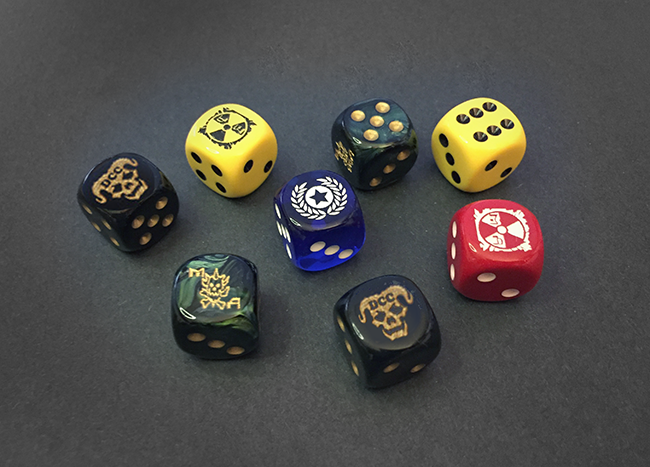 World Tour Game 11: A leather dice bag for the judge! 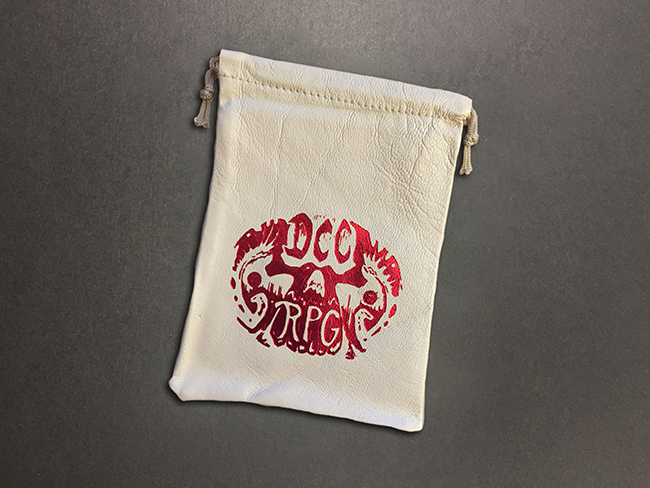 World Tour Game 12: A belt buckle for the judge! 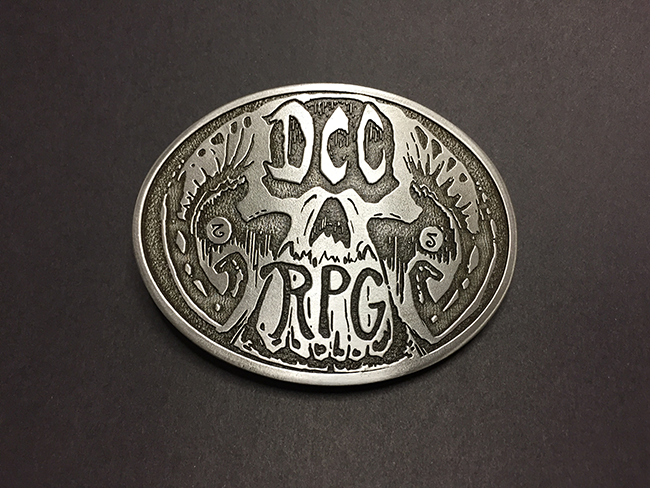 World Tour Games 13+: And at the end of the year, all judges who run 13+ games will get their own custom vintage wood-grained Judge pin, just like the Goodman Games judges at Gen Con! 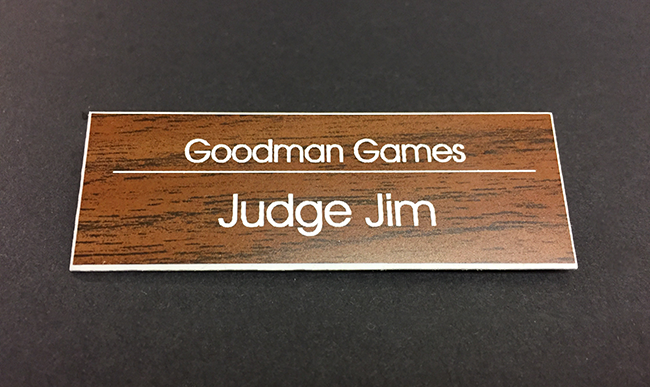 What about the Worlds Tour T-Shirt?

Fly your Goodman Games Worlds Tour 2017 colors with pride! In years past we used a T-shirt as one of the Road Crew swag tiers, but we’ve since discovered that many players would prefer to be able to buy one. That lets you show participation early (rather than waiting until you earn the shirt), and also lets both players and judges participate.

You can buy a T-shirt for the World Tour in our online store! 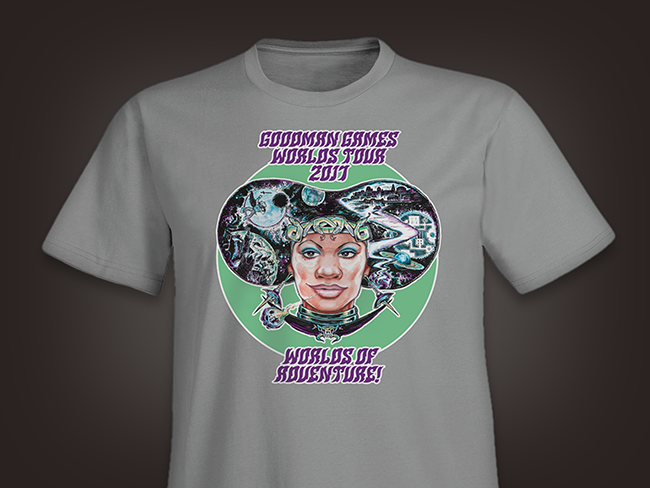 Need ribbons for a convention game? You can get those too! 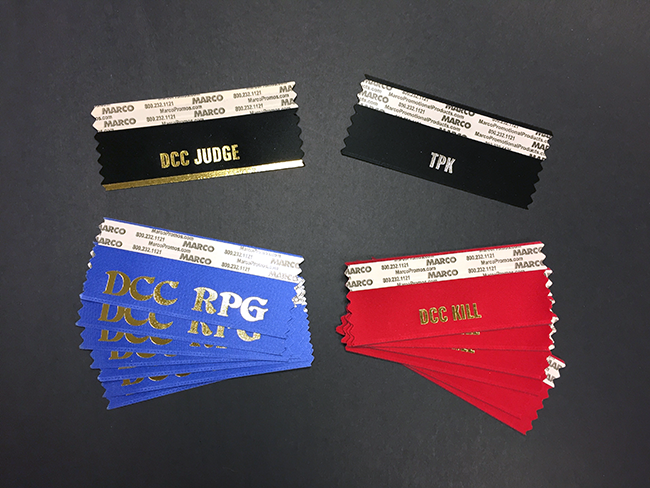