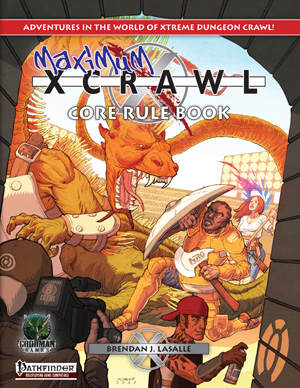 In Xcrawl, the players are superstar athletes taking their chances in a live-on-pay-per-view death sport. It’s a modern-day world with a fantasy twist, and the game is simple: the Dungeon Judge, or DJ, creates an artificial dungeon under controlled – but lethal – conditions. He designs the maze, and stocks it with monsters, secret doors, magical traps, treasure and prizes. The players must go through the dungeon and fulfill whatever conditions the DJ puts forth in order to win.

Xcrawl is a sport and the challenges are created, but the danger is no less real. If you die, you die. There are no second chances. Citizens of the North American Empire tune in every week to watch their favorite celebrities get eaten, paralyzed, turned to stone, and ripped apart. The nation’s hunger for blood and mayhem grows with every contest. How will you fare?

Produced in cooperation with Pandahead Publishing.

Check out all three editions of Xcrawl!

July 13: Another interview with Brendan LaSalle! This time from the Doc Palindrome podcast.

May 22: Listen to Brendan LaSalle’s interview on the Grown As Gamers podcast. The interview starts at 18:30.

March 30: The DCC RPG version of Dungeonbattle Brooklyn is available!

August 30: Download the pregens used in our BostonCrawl tournament!

August 25: The results of our BostonCrawl tournament at Gen Con 2014 are now posted!

August 8: Xcrawl is coming back! Learn more about Maximum Xcrawl, scheduled for release in late 2013!

June 15 is Free RPG Day! Make sure to get your copy of the Xcrawl Studio City Crawl!

May 24: The official Xcrawl facebook page is live! Check it out!