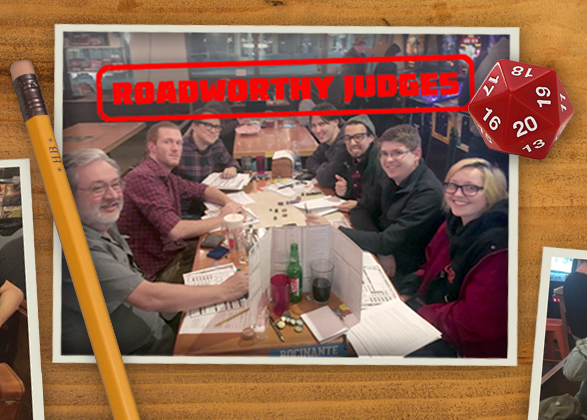 Welcome to our newest feature: Roadworthy!

Our Roadworthy posts are designed to give some of our star Road Crew Judges a spotlight. We’ll show off what they’ve done, where they’ve done it, and who they’ve done it with! …and get your mind out of the gutter.

We start off the new year ready for our Road Crew to take on new challenges, meet new people, and boldly go where no Judges have gone before! This is your chance to have that moment in the sun, where all the other Goodman Gamers get a chance to see us show you off. Jump on into the Road Crew program for your chance!

We kick off this new feature by spotlighting Judge Zedd!

Roadworthy: A Profile Of Judge Zedd 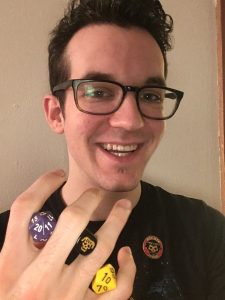 My name is Zak Lane, but these days to my gaming groups here in Seattle I go by Judge Zedd. I am a recovering stand-up comedian, tabletop gaming enthusiast, an armature eccentric, and in my spare time I work a real job and take care of my pet rocks.

Like most great discoveries it was quiet by accident, I stumbled on the core rules at a comic shop / gaming cafe downtown, I spent an hour in the store looking at the art and perusing the rules, in those pages I found every ounce of a way of thinking that I wanted from other games but I could never find. Dungeon Crawl Classics had a lot of je ne sais quoi, if you’ll pardon my French, and I came back a week later with my paycheck and bought the book, that was about 7 or 8 months ago now and since then DCC has been the only tabletop game I have run.

I have run a total of 14 public Road Crew games, as well as 3 sessions of a home campaign. My Road Crew games spawned an open- table DCC group that happens once a week at the same gaming store that I bought my rulebook. I share game running duties with the very talented Judge Gajus Miknaitis who has been a huge help with keeping me up to speed on rules, happenings, and with keeping things in-line with the DCC philosophy. I actually met Gajus during game #6 of the 2017 Road Crew World Tour and each game after has been substantially more awesome because of it! 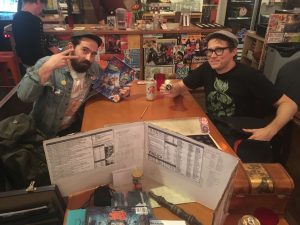 I’ve gotta say the randomness, the consequences of the rolls, and the community itself create this perfect vortex of synchronicity. A great example of this was game #6 when my players Chester and Gajus played a two person session of Frozen in Time, without giving away too much, there is an awesome sword and a robot (the one on the cover) and when Chester grabbed that awesome sword and used it for the first time he rolled a crit on the robot. Which alone is awesome enough but when Gajus suggested that I make that awesome sword into a Lucky Weapon like the ones in Crawl! #2 it was crazy, not only had I JUST ordered that issue of Crawl, when it came in the mail the next day and I rolled on the tables I rolled the equivalent of a crit for the sword and now it’s an amazingly powerful and awesome weapon that really enriches the story a bit and makes my players happy, at least until Chester figures out how the curse works. I love you, Chester.

I run my games at The Ray Gun Lounge/Gamma Ray Games. It’s a great place where you can grab a beer, sit down at a table, and play a game for a while. They’ve also got a pretty decent selection of pinball and classic arcade games. It’s my friendly neighborhood hive of scum and villainy, and will always hold a special place in my heart as the place I discovered DCC RPG.

For a judge, gonzo means don’t say no to your players. Let them do as they will, and make sure their actions have consequences, but don’t be afraid to put your own weird twists to those consequences. Stay loose and improv when you need to.

Stay organized, don’t be afraid to drop a c-note at the office supply store. I keep a card catalog of fun ideas stat’d up on note cards, monsters, cursed weapons, dimensional brains, you name it! I keep them all in a little lock box with alphabetical folders. I keep just about everything else in a briefcase.

Become aware of the community. There are so many fantastic resources out there on G+ and the Goodman Forums, I mentioned the Crawl Fan Zine above but there are TONS of fantastic 3rd party stuff and fan made stuff like the Gongfarmers Almanac and the podcast Spellburn. Don’t be afraid to get involved, ask questions, and may the dice be with you.

And there you have it! You can be a part of this new feature by showing your skills as a part of our Road Crew in 2018. And be sure to keep your eyes open as more Road Crew Judges are show to be…ROADWORTHY!