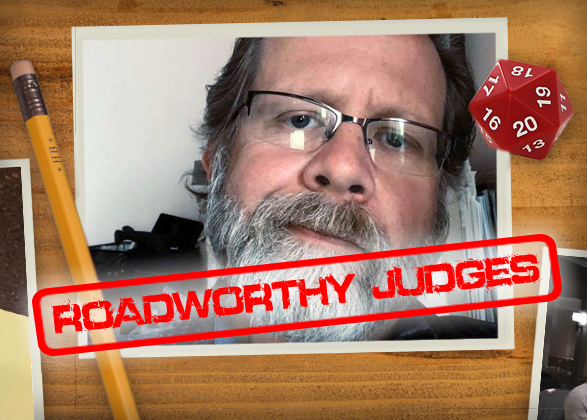 Into the heartland of America we travel to find our latest addition to the Roadworthy Crew. From the wilds of western Ohio, today’s Judge brings us an artistic view on gaming. A big welcome to Judge Chris Lauricella!

My Name is Chris Lauricella and I live in Dayton, Ohio. So I am asked to describe myself, and I am finding this difficult – not unlike picking your own nickname. That said, friends of mine like to introduce me as a modern renaissance man, I suppose due to my varied background. My undergraduate degree is in fine arts with a focus in painting contrast that with the years spent as a mechanic in the US Coast Guard. After discharge I eventually found myself in Medical School.

Between all this I was an avid fencer, a modestly competent fly-fisherman, and even did a little stand up comedy. Add to all this the wreckage of a dozen other hobbies which seem to fill my house at any given time and I will take the moniker of renaissance man over pack rat any day. 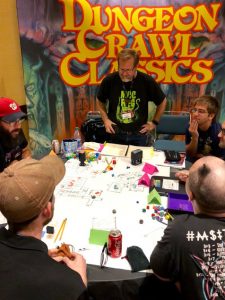 That is an adventure unto itself; I first heard about DCC from Jim Wampler’s tenure on the podcast “Save or Die” and based on his enthusiasm alone I bought the book, flipped through it and said ‘Hmmm, sure are a lot of tables’ and proceeded to play Hackmaster 5e for about two years. At that point my son and I found ourselves at GenCon with a fist full of generic tickets and some time to kill.

By absolute happenstance (Or perhaps it was The Three Fates) we turned a corner and Goodman Games was running something called a character funnel tournament with none other than Harley Stroh at the helm. So we jumped in. And we died. We died horribly and we died repeatedly. And it was simply the best gaming experience I had had in years. I knew instantly I had found a group that played the game not only like I used to play it as a kid but with an energy and exuberance that I hadn’t seen in years. (I also knew instantly that I had a copy of the rules sitting largely unopened at home – The Three Fates have a funny sense of humor that way.)

I think I ran fifteen to twenty Road Crew games in 2017. 2018 has been more ambitious, I have run twenty Con games thus far with two to four more slated for AcadeCon in Dayton. I also started running games at my local Comic/game shop in Dayton, Bell Book and Comic. There I have run 13 games with more on the way.

“What is that?” Asked the woman to my right “I don’t know ….” Her friend slowly answered while shaking his head. “But that is what makes this awesome!” When this happens I know all the hours of prep work have been worthwhile.

I have had people tell me that they physically felt the world closing in on them while playing in my Tomb of Horrors character funnel. Similarly I had a player quip “I seriously just got chills, y’all” as I described the undead hoard lurching their way down the hallways of Castle Ravenloft. I hold these complements to my GM craft dear. But, as important as tension and fear are to the narrative of any game session I want to inject that child-like sense of mystery and wonder into the game. If I can surprise a player who has been rolling dice for forty years and return to them that sense of mystery that we all had when we were eight then I know I knocked it out of the park. 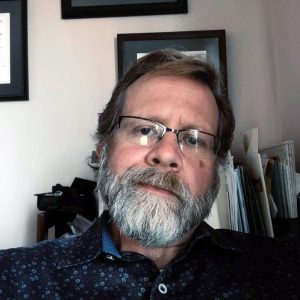 Here is a little secret – The players sitting at the table don’t care about rules or how carefully parsed the flavor text is, the players at the table want to go on an adventure. Take them there. This principle should guide your preparation and your decisions. Do you need to be comfortable with the rules? Of course. Likewise you should know your material well enough to avoid wasting time at the table. But above all else let the adventure, the dramatic tension, the story unfold at the table with the players decisions guiding the action and the consequences.

How do you create this sense of unfolding adventure? Two basic elements: fear and wonder. Fear is not character death or lost hit points. Fear is knowing the consequences for failure ahead of time. (“Meet or beat a fifteen or the chain wraps around your leg and you are pulled into the sulfurous pit of hell and yea, you die.”) Wonder comes from shelving the rule books and reading the Appendix-N materials. Let that be the soil from which your own ideas spring. Create the monster, the magic the central conflict then bend the rules to make the story work.

With all this said, your players are going to throw you curve balls and that is okay. When they do, congratulate them—toss them a fleeting luck token if you want—and then tell them how you are adjudicating the action. “Wow, I have never had anyone decide to jump onto the giant’s back and stick a burning torch in her ear…. Tell you what, meet or beat a 15, if you fail you still land on her back but you drop the torch, but a one means you fall and that will be 2d6 damage.”

The players have committed to the action, but now they know the consequence of failure and there is a real tension about the scene and the die roll.

Most importantly, jump in and do it. Nothing teaches as well as experience.