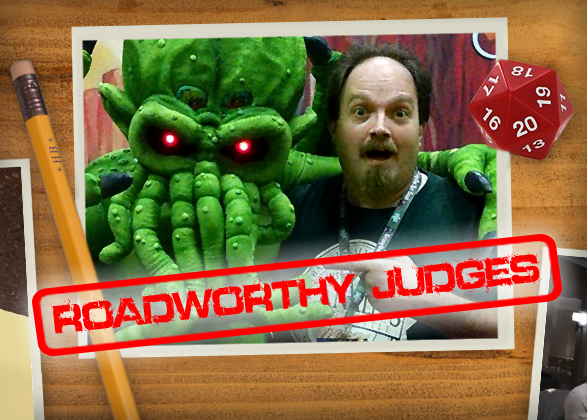 Another exotic location for the latest addition to our Roadworthy line-up. We’ve gone to Tasmania, to England, to Brazil, but we’ve never gone anyplace like this before. Today we present Judge Josh…of Toledo. 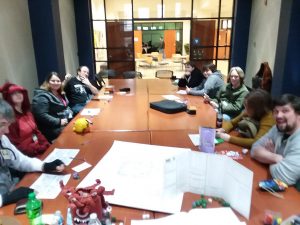 I’m Josh Burnett, and I’m from the blasted ruins of the land men once called…Toledo. I’ve played RPGs for 30 years, run convention games for 25 years, and written and illustrated RPG material for 11 years. I love all sorts of role-playing adventure games, from moldy old smash-and-grab dungeon crawls to squishy high-narrative story games. If it lets me pretend to do interesting things I can’t do in real life, I’ll play it. I run a bi-weekly game in my home with my wife, kid, and a few of our friends. I also belong to four regular online game groups. RPGs are my main hobby and my primary creative outlet. 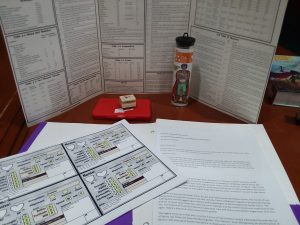 Brad McDevitt introduced me to Dungeon Crawl Classics back when it was in playtest. At the time, I was heavily into rules-light narrative games with some occasional dabbling in old-school D&D, and the weird dice and massive spell charts totally turned me off DCC. I stuck with B/X and its clones for my fantasy gaming fix. A few years passed, and DCC remained in the periphery of my gaming circles. I kept hearing about the crazy-awesome things happening in DCC campaigns—dimension-hopping, frog temples, robot wizards, and more. At some point, the DCC core book PDF went on sale for $5, so I decided to take the plunge. I read through the whole thing and was immediately hooked (enough so that I ponied up full price for the hardback book a week later). The sense of excitement in Goodman’s writing, the baked-in strangeness of the magic system, the fantastic art—I was a convert.

I’m a brand new Road Crew judge. I have so far only run one Road Crew game, this past February at BASHcon at the University of Toledo. I have a couple more games lined up later this year at local games stores, including a game on Free RPG Day. [Which we assume went great!] I already have my bookmarks; I want that belt buckle!

It’s always fun to introduce fresh new gamers to DCC, but my favorite experience is when people who’ve played “mainstream” D&D for a long time get a taste of what they can do with DCC. I especially love it when they take a 0-level character with bad stats and just lean into those low numbers. At the convention game I ran, a veteran gamer played a grave digger with a 4 intelligence and not-great stats everywhere else. He found a 20 lbs lead duck in a treasure stash. That poor dumb zero loved that duck. It became his totem, his best friend, and (after tying it to a length of rope) his primary weapon. The loose, go-ahead-and-try-it attitude of DCC let that sub-par gravedigger become a duck-swinging champion of chaos. I’m so glad he survived the funnel. 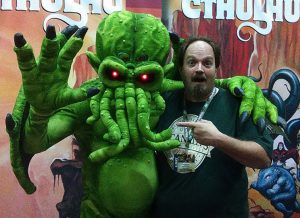 My favorite public game spot is Dragon’s Roost Coffee & Games in Sylvania, OH. It’s got great coffee and a welcoming atmosphere. It mostly caters to miniatures gaming, but they have a selection of RPG and card games too, and some great gaming spaces.

DCC (especially with funnel adventures) is one of the few games where the GM can cut loose and freely slaughter PCs without guilt. Don’t miss that opportunity to indulge your inner murder-monster. Just make sure you have a way for your players to get new characters in a timely fashion. It’s no fun for players to have to sit out the rest of the session after their characters all die 30 minutes in (especially if they paid money to play!).