Announcing the 2nd printing of DCC #72: Beyond the Black Gate

Home » Coming Soon » Announcing the 2nd printing of DCC #72: Beyond the Black Gate

Nothing lasts forever, but some things come back better than ever!

As older DCC modules sell out, we’re excited to reprint them with all-new covers and expanded content. We’ve recently done this with:

• DCC #80: Intrigue at the Court of Chaos, with new cover by Fiend Folio legend Russ Nicholson

And now it’s time for the next reprint! Longtime fans of pulp fantasy art will know the name Ken Kelly. Coming of age in the 70’s with high-profile projects on Warren magazines like Creepy and Eerie, Ken Kelly began his career as a protege of Frank Frazetta and soon had his own cult following. Now we’re excited to announce our first collaboration with Ken – his cover painting for the 2nd printing of DCC #72: Beyond the Black Gate, by Harley Stroh! 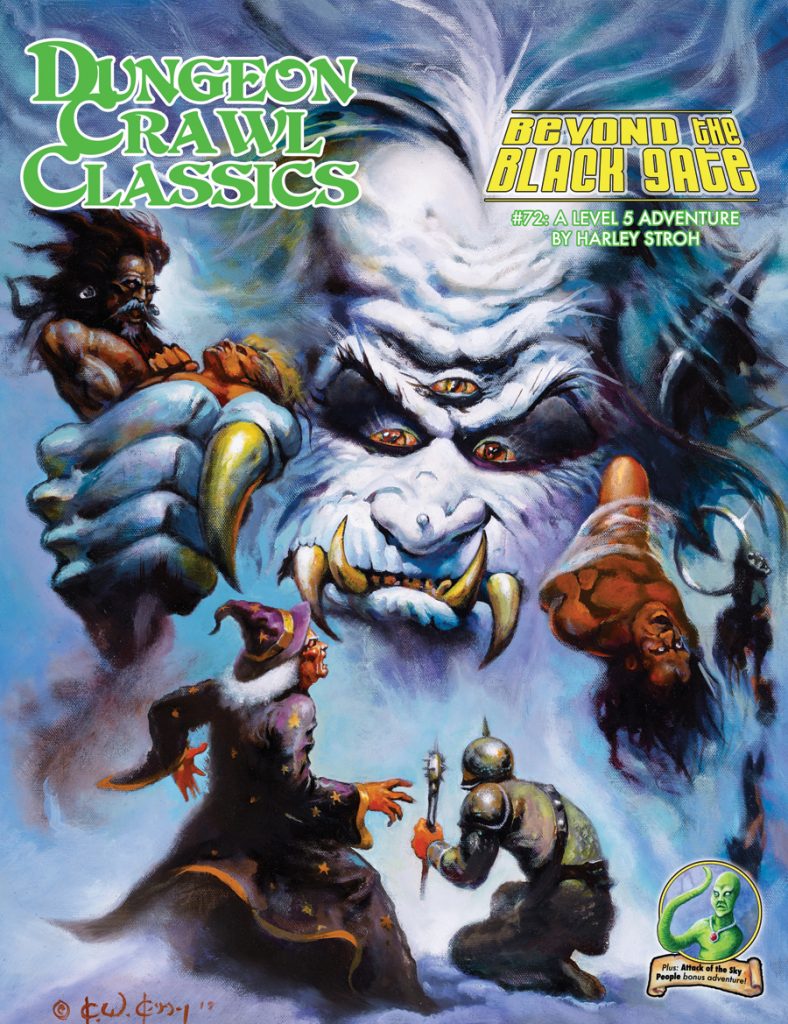 Beyond the Black Gate has already been noted for its prominence in the DCC canon. It is the first time a new patron was presented outside of the core rulebook, the first time an adventure featured travel to another dimension, and it was the first “high level” DCC adventure. At the time of its publication, Beyond the Black Gate was the highest level adventure available for DCC RPG. Harley Stroh pulled out all of the stops when he crafted this adventure, and it certainly deserves the dynamic new cover it is getting!

And if that’s not enough, this reprint also features an all-new backup adventure, “Attack of the Sky People” by Terry Olson!

The infamous winged sky-pirates from the planet Tahlmohl have crashed! Their ship was blasted in two by a defending craft, and the “bow” half has fallen near the PCs. The pilots died, but not before activating a distress beacon that extends a green column of light into the sky. Some of the ship’s robots and constructs survived the crash, and they wait to be rescued by those Tahlmohlians that will surely answer the beacon’s call. In the meantime, who knows what alien riches sit in the wreckage, waiting to be plundered?

Look for the 2nd printing of DCC #72: Beyond the Black Gate to go on sale later this year!

And if you’re worried about seeing less of Doug Kovacs’ amazing art – don’t! We have more news on his current projects coming soon!