Forgotten Treasure: Beyond the Black Gate

Forgotten Treasure: Beyond the Black Gate

DCC #72: Beyond the Black Gate is an adventure that isn’t talked about in DCC circles as much as more iconic ones, but it is a very important milestone in DCC RPG becoming what it is. It is the first time a new patron was presented outside of the core rulebook, the first time an adventure featured travel to another dimension, and it was the first “high level” DCC adventure. Harley Stroh is an innovator. 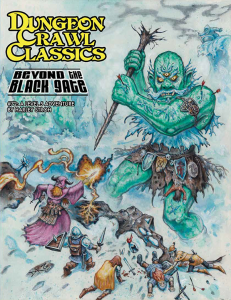 DCC #72: Beyond the Black Gate by Harley Stroh

Beginning with a nasty storm at sea that starts the action immediately, the adventure quickly takes characters to shelter in a fallen chapel. In the chapel they meet a coven of witches who send them across dimensional boundaries to the Thrice-Ten Kingdom to retrieve the Crown of the Horned King. In the frozen Thrice-Ten Kingdom, the characters must infiltrate a fortress of ice giants to achieve their goal.

At the time of its publication, Beyond the Black Gate was the highest level adventure available for DCC RPG. It is not a difficult adventure to survive just because of that, though. The introduction warns that even for a party of 6-10 level 5 adventurers, those who seek to hack and slash their way to victory will likely meet a sorry end. But this kind of difficulty is par for the course on a Harley Stroh adventure. Harley explains:

“I approach high-level adventures the same way I write 0-level adventures: outclass the PCs with encounters so imbalanced and unfair that the players have to really think about their decisions. Err on the side of difficulty, leave a little room for PCs to wiggle, and there’s very little a smart group of players can’t overcome.

‘Make it really hard and see if the PCs survive.’ Terrible design advice, but it works really well for DCC.”

The inspirations for this adventure are many and varied. It clearly draws from Celtic, Norse, and Russian mythology for starters, but also from things in Harley’s life. “I live in the mountains and in the winter sometimes we do a little off-piste / backcountry skiing and boarding. The danger of a slide or avalanche is always very real and we do the best we can to minimize the risk. The slide in area 2-3 is borne out of that awareness. The slope capped by an “enormous snowy cornice” ? That’s not flavor text; that’s a warning that a ton of ice, rock and snow about to fall on your PCs.

This creates an interesting game design challenge. Just because it exists in a game, doesn’t mean it should be survivable – a statement some designers might find fault with. The avalanche is one of those encounters that could easily result in the death of PC for no other reason than that the player wasn’t paying attention.”

Most gamers are heavily influenced by the artwork of their childhood, and Harley is no exception. Beyond the Black Gate features a couple direct call-outs to particular pieces of art that Harley remembers. “I grew up on Endless Quest books,” Harley says. “Timothy’s Truman’s art figured prominently in my imagination as a kid, and his images in Return to Brookmere still leap to the fore of my brain. The frozen waterfall in area 3-7 is a reference to Brookmere illustrations (both Truman and Elmore), just like the near-dead enchanter in the first encounter on the Purple Planet. Truman is still active in comics. The hilts of his swords in Dark Horse Comics’ Conan series are just like the hilts he drew back in the late 80s. You can recognize his work by the details. I’d love the chance to work with him at some point.”

(If anyone reading this has a connection to Timothy Truman, let us know so we can make one of Harley’s dreams come true.) 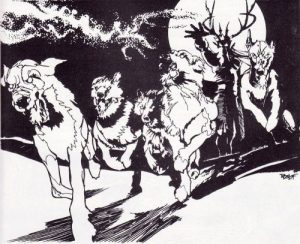 The Horned King himself was based on Jim Roslof’s classic illustration from the first edition of Deities and Demigods. “[Roslof’s] death remains a cloud that hangs over RPGs and DCC; there was still so much good artwork to come,” Harley says.

Occasionally things get really weird, and it’s hard to tell whether life is influencing Harley’s adventures, or if the adventures are influencing his life! Harley has talked before about how there were mushrooms everywhere in his life when he was writing Peril on the Purple Planet, and he had a similar experience while writing Black Gate. “When I wrote the adventure, ravens wouldn’t leave me alone. They clustered outside our bedroom and called at us for hours upon hours. They’d keep me awake at all hours of the day, but once the adventure was turned in, they vanished.”

If the characters survive the challenges and succeed in getting the Crown of the Horned King, they are rewarded with items of magic. These magic items are perfectly in the style of what good DCC RPG magic items should be. They are mechanically simple, but they ooze with flavor and many of them suggest additional history or adventures for the judge to invent.

Beyond the Black Gate is an adventure unparalleled. Listen to what these members of the DCC RPG community have to say about it:

DCC #72: Beyond the Black Gate is available in our online store in print or as a PDF. 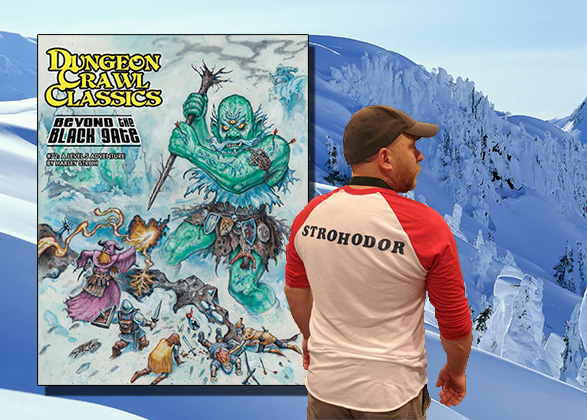