Battle Royale: The Slave Pits of Lost Agharta by Harley Stroh Bride of Cyclops Con heralded a new kind of tournament for DCC RPG: The Battle Royale. Abducted from the light-filled surface lands, the PCs were pressed into slavery by wicked Aghartan slave lords (of DCC #91: Journey to the Center of Áereth) and forced to battle for their masters’ amusement. Each player was given a single first level warrior. The sole differentiating attribute was their hit points, which were only rolled after answering the crucial question: was the character a cannibal (having kept up their strength by feasting on the flesh of their downed comrades) or had the PCs kept their dignity, at the risk of growing weak in the Aghartan gloom? The answer would come into play in more ways than one. For as myth warns us, partaking of repast in the mythic underworld seldom ends well. At the sounding of the doom gong, the first wave of six PCs was ushered onto the base of the towering ziggurat. Above them loomed slave giants, machines of war, blazing crystals and guttering braziers. Clouds of man-bats circled in the dark even as leviathans struggled to crawl forth from the frothing waves. The goal for each PC was simply to survive, but the means of survival was left to the players. Some sought to forge alliances, others pursued bitter grudges to the grave, and yet others turned the ziggurat’s dangers to their advantage. As PCs fell – whether beneath the blows of giants or to their fellow slaves – they were replaced by other waiting PCs, so that all the players  cycled through the game (and some more than once). The ziggurat itself was replete with danger. Mounds of slain corpses presented the lure of looted gear; towering green crystals offered both arcane risk and reward. Those that survived more than a round or two of the constant onslaught had to be cautious and quick by turns, and more than a little bit lucky. The result was a game that was largely judge-free: Each round PCs determined their own actions – attacking foes, turning ballistae on slave barges, kicking foes back into the wine dark seas, or vaulting onto flaming pillars. And then, at the end of each round, each player also took on the role of one of...

The Winners of the Return to the Starless Sea by Terry Olson This year that shall not be named has assailed us with challenges and hardship, but briefly, over one hundred players left it all behind to Return to the Starless Sea! This fourth annual DCC RPG Team Tournament was unlike its three predecessors in many ways: it featured a funnel; it had only two rounds; different round 1 flights had different content; the final round had six teams competing; teams couldn’t pre-select PCs; and IT HAD A WIZARD VAN! The design team had intended the tournament to be run for over 500 players at Gen Con, and we even had space reserved in Lucas Oil Stadium! Gen Con was canceled, but that didn’t stop the reavers of DCC. Round 1 began with five players, each with four zero-level PCs, in a possible future that occurs after Sailors on the Starless Sea. A peasant army surrounded the new chaos keep, trying desperately to enter. The keep’s walls churned and melted, with spectral faces screaming from the living chaos stone and magic portals flashing open and closed. Almost one-third of the peasants died trying to enter the keep (282 in total!), but the survivors used guile and a whole lot of Luck to triumph and enter the keep. After conquering a four-armed vine horror, the survivors descended a beastman-guarded crater. At the bottom was a pulsing crimson ziggurat! Here, our poor damaged gongfarmers battled past a swarm of waxy meltmen to confront a pulsing crystal at the ziggurat’s zenith. Judge Stefan Flickinger’s team had less than a minute of play time remaining when Mat Sauers’ PC hit the crystal with a sling bullet and his teammates yelled, “YOU CAN BURN LUCK FOR DAMAGE!” With 11 points of Luck burned, he triumphed! When teams shattered the crystal, however, things went from bad to worse. The pyramid shuddered, pitched, and rose as a huge body bulged underneath. It was a cyclopean soul-eating leviathan! But before the leviathan could destroy the characters, the impossible happened: a WIZARD VAN teleported out of the blue to save them! Piloted by none other than the Purple Sorcerer himself! “Come with me if you want to live,” he told the PCs, “The only way to end this is to stop it from beginning!” Thus ended round 1... 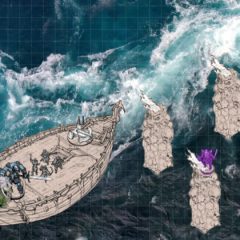 Battle Royale: The Slave Pits of Lost Agharta by Harley Stroh Bride of Cyclops Con heralded a new kind of tournament for DCC RPG: The Battle Royale. Abducted from the light-filled surface lands, the PCs were pressed into slavery by wicked Aghartan slave lords (of DCC #91: Journey to the Center of Áereth) and forced to battle for their masters’ amusement. Each player was given a single first level warrior. The sole differentiating... 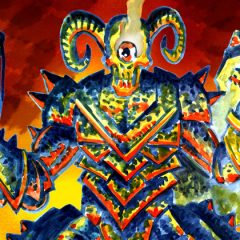 The Winners of the Return to the Starless Sea by Terry Olson This year that shall not be named has assailed us with challenges and hardship, but briefly, over one hundred players left it all behind to Return to the Starless Sea! This fourth annual DCC RPG Team Tournament was unlike its three predecessors in many ways: it featured a funnel; it had only two rounds; different round 1 flights had different content; the final round had six... 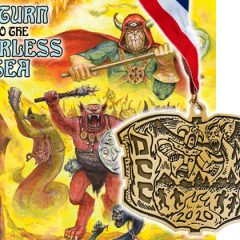 DCC Open 2020 Return to the Starless Sea Tournament Results At Bride of Cyclops Con 2020, Goodman Games ran the DCC team tournament, The Return to the Starless Sea. This year’s tournament features a new adventure, and a new format – the team funnel tournament – where five player teams consisted of multiple 0-level PCs controlled by each player. Over the course of two fantastic virtual days and as many hard-fought rounds, hundreds of... 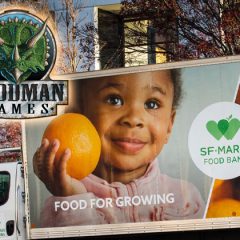 We previously announced the SF-Marin Food Bank as our charity for Bride of Cyclops Con. Today we are happy to announce that we have donated $1000 to benefit those in need, thanks to the outstanding support from our fans at the convention. This charity is local to us, but it serves a need that is, unfortunately, becoming all too common in these challenging times. Please support your local food banks and ensure that all people can find... 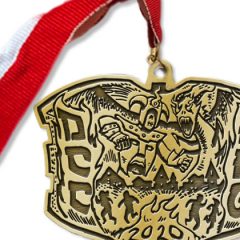 At Bride of Cyclops Con we gave out the third annual Goodie Awards! These special commendations recognize service to the DCC community, whether through judging, volunteering, or killing lots of PCs. There are so many who deserve recognition that we feel humbled. This list is only a small fraction of the best of the best, and you’ll see there are many honorable mentions since we just can’t physically honor everyone. Without further... 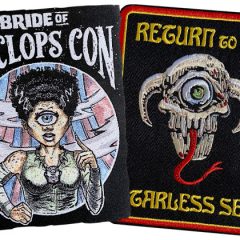 Order Bride of Cyclops Con Patches in the Online Store

Bride of Cyclops Con has been caged. The monster is no more. But the memory lingers and the repercussions are still being felt. Like these patches! If you were a Judge or a Volunteer at Bride of Cyclops Con, you immediately qualify to order a patch indicating such! The Bride of Cyclops Con patch is now available in our online store! Sorry players, these are ONLY open to the people who were Judges or Volunteers during the show. Also,... 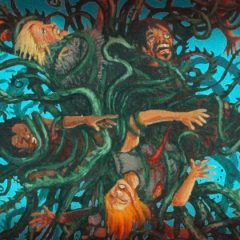 Announcing the Winners of Our Bride of Cyclops Con Tournaments!

Bride of Cyclops Con had many amazing events, but two of the most anticipated were the DCC RPG Team Tournament: Return to the Starless Sea and The Slave Pits of Agharta Battle Royale. And they did not disappoint. Many characters were lost in the aether of the internet as they fought to become champions, but all of them were lost in the efforts of fun. A huge thanks goes out to all the players, Judges, and everyone else involved in... 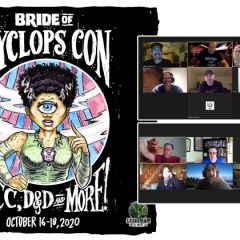 Thank You, Fans, For A Great Bride of Cyclops Con

This morning The Cyclops woke up with a splitting headache, seeing extra-single from eating meeting so many people over the weekend. And that’s all thanks to you. Our fans are the best in the world. The energy and fun that you shared with everyone these past three days was amazing. We saw so many old faces and many many new friends. And so we want to share some images from the con! All of these shots are fan-caps of their... 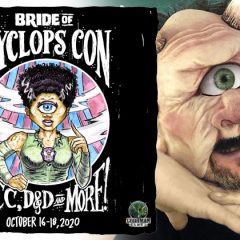 The Cyclops Says Thanks for a Great Con!

The monster is caged. The storm has passed. Peace has returned to the village. But what an amazing three days it’s been. THANK YOU for making the first Bride Of Cyclops Con such a great success! We had a wonderful time and hope that you did also. We had so many wonderful games and seminars, from the opening ceremonies (technical glitches and all) through the DCC RPG Team Tournament to the What’s New With Goodman Games... 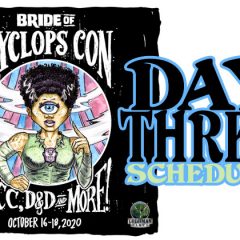 IT’S BROKEN FREE! BRIDE OF CYCLOPS CON IS RAMPAGING FOR ONE FINAL DAY! You can’t keep a good thing caged up, and Bride of Cyclops Con is no exception! The con is a monster, and it’s running rampant this Sunday…in a fun way, of course. Everything concludes tonight with the Closing Ceremonies! Be on Twitch to watch Joseph Goodman and guests—a certain Cyclops is sure to appear—as he goes over everything that was... 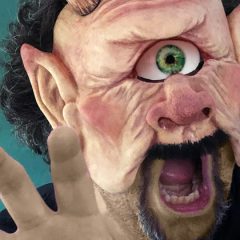 The Cyclops Wants to Game With You!

The Cyclops is gaming this weekend! Why aren’t you? Despite a serious issue with depth perception, The Cyclops has found his way out of his cave and is busy rolling dice in a virtual world at Bride of Cyclops Con! There are still plenty of games open and chances to have fun tonight and tomorrow. Come join him and his bride! It’s Bride of Cyclops Con, happening now! COME TO BRIDE OF CYCLOPS... 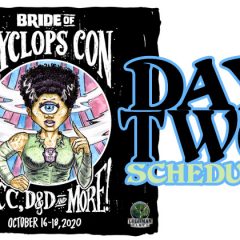 WE’VE BUILT A MONSTER FOR YOU! BRIDE OF CYCLOPS CON CONTINUES! The first day has been buried in the past, but day two has been re-energized by the electricity that is Bride of Cyclops Con! Our Judges let us know that the first day of the DCC RPG Team Tournament: Return to the Starless Sea was met with many a TPK. Yet, some teams have persevered! Who will make it to the finals tomorrow? Only time will tell! Now let’s look...