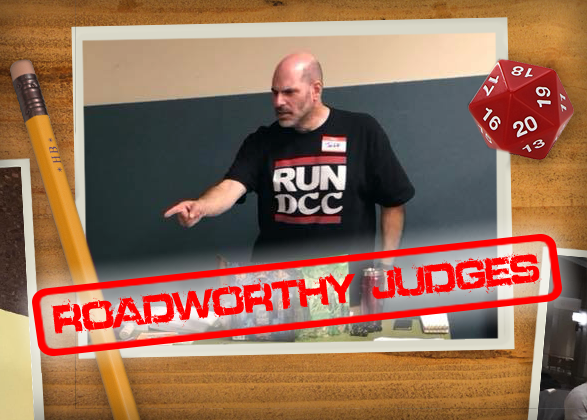 The Road Crew theme for 2019 is Road Trip! We want you to get out there and experience the world. Whether it be in real life or online, you can always explore unknown lands and make new friends. Who knows, maybe we’ll put you up on our website. Jump on into the Road Crew program for your chance!

Today we travel to the Land of Lincoln. We present to you one of our most active Judges. A man who ran as many as FORTY events in a single year. Let’s meet Judge Jeff Bernstein!

My name is Jeff Bernstein. I’m originally from New Jersey and have been living in Palatine, IL going on five years. I regularly game at Games Plus in Mt. Prospect, IL and occasionally at TPK Games in Glen Ellyn, IL. I also try and attend a few conventions including Gamehole, Garycon, Nexus Game Fair, and Gencon. 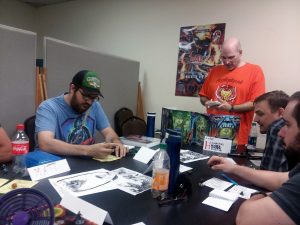 At my first-ever gaming convention, Nexus Game Fair 2016. I loaded up my schedule that included four games of DCC (Judges included Judge Brendan LaSalle and Judge Valerie Emerson). The one that pushed it over the top for me was playing a late night off-the-books session of DCC, The Arwich Grinder [from Crawl! #9] with Judge Daniel J. Bishop, Brendan LaSalle, and one other dude I can’t remember his name at the moment. I hadn’t played ANYTHING that fun and disturbing before. I was hooked!

As of “right now,” how many Road Crew games have you run in this or past seasons?

In 2017 I must have run over 30 games of DCC including new and continuing adventures. 2018 was closer to 40 including DCC and MCC.

I’m a fan of my players so when they make one-chance-in-20 die rolls I cheer right along with them. That’s happened a number of times, once when the cleric was at 3 Luck and needed to make a Luck check or die and he hit it exactly. Applause all around!

The first game of DCC I ever ran was The Arwich Grinder. At one point the PCs stacked some barrels on top of each other and I thought, “There’s no rule for this! What do I do?” I came up with something that made sense and the game kept rolling. It’s not that it was such a radical game thing but it was the first time I ever “got” what my role in the game is: to make a call when there’s no rule to be referenced and to keep the game moving along.

I run games on Monday nights from 6 PM to 10 PM at Games Plus in Mt. Prospect, IL.

Stand up when you run DCC! Move around! Speak up! Let your players know you are bringing the game and you want the same from them! 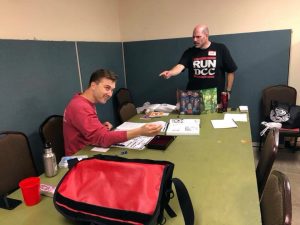 If you’re gonna run multiple game sessions schedule them for the same day of the week, same start time. I think a regular gaming schedule encourages more regular gaming. Life still gets in the way and not everyone can make every game. Hand wave it when you can. And show up and start on time! And be prepared: know the rules (and the location of stuff in the rule book) enough where you feel mostly comfortable, know the adventure you’re going to run so you can zig when your players zag (and they WILL zag).

Embrace the tone and flavor of Dungeon Crawl (and Mutant Crawl) Classics : play the 0-level funnel, use the dice chain, read and run the published adventures to see how they’re different from so much of what else is out there, use the spell and mutations tables, have a spell duel, use the patrons, use the gods, on and on and on.

Read the literature and know the tropes that the games are based on. It’ll be easier to come up with stuff on the fly when you know what elements are part of the genre.

I let my players roll their own damage so it’s less like I’m the one squashing their characters.

Get a Dead stamp! I don’t even have to mention it when a character dies; my players just reach for it and pass it around.

Play with other judges and see how they do it. Cop all of their good ideas but don’t be a dick about it.

What is the wackiest, most off-the-wall monster you have ever thrown at your group? Please describe it and your player’s reactions to facing such a horror.

No specific monsters come to mind, but my players really enjoyed shark hunting in DCC #75: The Sea Queen Escapes and the dark twisted plot of Death Slaves of Eternity.