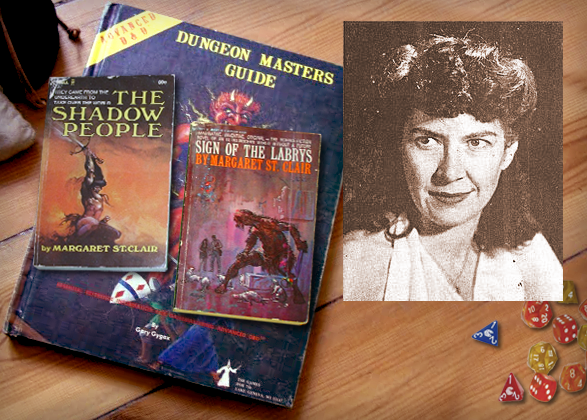 Margaret St. Clair was born on February 17, 1911. Her work appears in Gary Gygax’s Appendix N, and is important for lending a crucial concept to the D&D game: the idea of dungeon levels. Here is Michael Curtis with more information on this important writer…

The titles and authors appearing on the Appendix N list are varied. Some are fantasy, others science fiction, and they range in time period from works contemporary to when Gygax was designing D&D to much earlier stories. While some of the Appendix N authors’ contribution to fantasy role-playing are obvious, not all lend themselves to easy discovery. 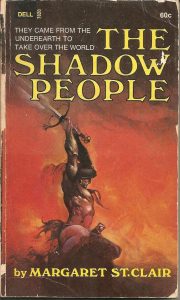 One such example of the occluded contributions to the hobby is the subject of this column, the author Margaret St. Clair. Two of St. Clair’s works are specifically named in Appendix N and this column focuses on one of them, The Sign of the Labrys. This novel, like its Appendix N companion, The Shadow People, had a subtle influence on D&D, one which lingers to this day in that and other fantasy RPG titles (such as the excellent Dungeon Crawl Classics).

Margaret St. Clair is an interesting figure, one whose work is largely overlooked in the present age. St. Clair was one of only three women authors who appeared on Gygax’s list of influential writers and their works. During both the Golden and Silver Ages of fantasy fiction, the field was dominated by white males, so much so that the now-often derided pronouncement on the back cover of the Bantam Books 1963 printing of The Sign of the Labrys (“Women are Writing Science Fiction!”) was actually somewhat shocking. The fact that Appendix N includes three women authors is a testimony to the breadth of Gary’s reading. 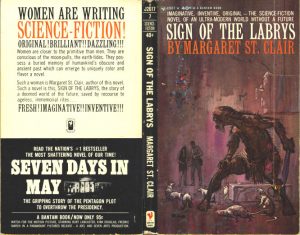 Largely private about her personal life, rare autobiographical writings and interviews with friends reveals Margaret St. Clair to be a woman who was ill-suited to the limitations imposed on women by the social expectations of her times. She and her husband, Eric St. Clair, were childless by choice. They travelled often, including visits to nudist colonies, and were amongst some of their earliest initiates into the Gardnerian Wicca tradition, inducted by none other than the famed occult author, Raymond Buckland. She wrote, by her own count, 130 short stories and eight novels in the genres of science fiction, fantasy, mystery, and detective stories, under both her own name and nom-de-pens. Clair was no middle class American housewife, for certain! But how did her work impact fantasy role-playing?

The Sign of the Labrys tells the tale of a dark, post-apocalyptic future. In the wake of a plague that killed 90% of humanity, the survivors take to living underground in a vast complex built originally to serve as a communal fallout shelter. Against this backdrop, an ordinary man named Sam Sewell gets drawn into a plot to track down a mysterious woman named Despoina, whom authorities believe is the head of a cult or anarchist group dwelling on the lower levels of the complex.

At first glance, the novel’s influence on D&D is difficult to discern. However, as the reader progresses through the book, the following passage is ultimately discovered:

It is important to understand what a level is. It is not much like a floor in an office building. A level may be a hundred or a hundred and fifty feet deep, and subdivided into several tiers. Also, access to them is not uniform. The upper levels are simple and straightforward; one gets to and from them by stairs, escalators, or elevators. I dislike the elevators, myself, since if power should be interrupted, one would be stuck there indefinitely. But the upper levels are easy.

As one goes down, it gets difficult. Entrances and exits are usually concealed. The reason for this, I think, was partly to protect the VIP’s in the lower levels from unauthorized intrusion, partly to provide a redoubt in case the “enemy” was victorious, and partly because of the passion for secrecy that characterizes the military mind. 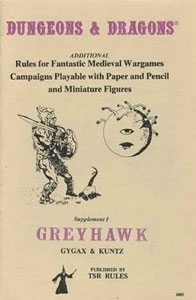 Anyone who has played D&D cannot read that passage without feeling a sense of immediate recognition. A tiered, underground complex comprised of multiple levels, some of which contained hidden exits and entrances and accessed by stairs and elevators, sounds identical to the classic “megadungeon” of fantasy RPGs, the kind that was so prevalent in D&D campaigns during the early years of the hobby and still linger to this day. Even the phrase, “As one goes down, it gets difficult” succinctly sums up the central design premise of dungeon creation. It is nearly impossible to dismiss the idea that when Gary Gygax was sitting in Lake Geneva, poring over sheets of graph paper as he designed the dungeon of Castle Greyhawk, he didn’t have the underground complex of The Sign of the Labrys in the back of his mind. St. Clair’s novel isn’t the only work that helped formulate the fantastical underworld of Dungeons & Dragons, but it’s certainly owed a debt of gratitude for helping inspire the ubiquitous dungeon of FRPGs.

The underground vault in the novel also suggests how the denizens of the classic megadungeon manage to get along without resulting to mass-murder, something that many gamers who hail from the “New School” often deride old school dungeons for. In The Sign of the Labrys, the human occupants of the vault have become a cloistered species, seeking to limit contact and interaction with each other to small doses and living in far-flung sections of a subterranean world built to contain a much larger population. This tendency to keep to one’s self and avoid contact with others, even in a warlike species such as humanity, would limit inter-species conflict in the mega-dungeon. If you ever wondered why the gnolls on Level Three never bothered to trudge all the way up to Level One to kill some kobolds, The Sign of the Labrys gives us the perfect rationalization.

Like all the Appendix N authors, Margaret St. Clair is an entertaining one. Even if you have no interest in dissecting the literary influences on Dungeons & Dragons and fantasy role-playing games as a whole, The Sign of the Labrys is an important work in the body of fantastical fiction, one that has been shamefully overlooked by fans of the genre. If you’ve not experienced the novel for yourself, take steps to correct that error as soon as you can, and if you’ve already journeyed along with Sam Sewell, perhaps it’s time to descend into the underworld one more time.