The Vizier’s Views: Mystery Under the Monastery

Home » Latest News » The Vizier’s Views: Mystery Under the Monastery

Once more, The Martian Vizier appears with his views to share, as he has before….

Spaces beneath the earth extend in three dimensions. This is well known to the denizens of other worlds as well as to our own. In some worlds, use of these spaces exceeds our own, and the inhabitants frown upon our rather flat dungeon designs. When his astral form sat in the cavern of Omolo the Impassive one evening, he was therefore pleased to discover something quite different. 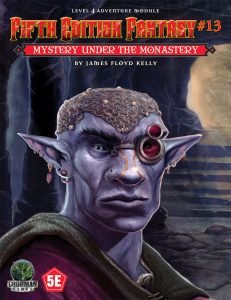 Fifth Edition Fantasy #13: Mystery Under the Monastery, is a 4th level adventure written by James Floyd Kelley for the 5th edition of the World’s Most Popular Fantasy RPG.  Within it, characters visiting the Trayban Monastery are asked to investigate the disappearance of several monks. The monastery has a secret connection to a trading post – Loobay’s Bazaar – deep beneath the surface. Reaching this is now less a horizontal trek than a vertical climb.

Even before the PCs reach the Bazaar there is fighting to do, but the adventure focuses rather on rescue efforts and diplomacy once the Bazaar is reached. Fighting is certainly unavoidable, but in the end, trying to hack your way through a powerful intelligent ooze is more likely to end up in a TPK than in success. Wise players will find another way.

The set piece area – “the largest geode cavern ever encountered” – has the potential to remind players that the game is about the wondrous as much as it is about tactics and treasure. There is also treasure, of course, and access to Loobay’s Bazaar as a persistent campaign location may be the greatest treasure that the PCs gain. Certainly there are many ways that an enterprising GM could expand the material presented herein as a campaign continues, offering hooks for numerous avenues of exploration.

“Shall we meet again six nights hence?” Omolo the Impassive spoke, as always, with minimal inflection. The Martian Vizier, who felt he knew the cold fungal being as well as any warm-blooded mammal could, believed that he heard a slight note of eagerness in the being’s tone.

The Martian Vizier did a quick calculation. Six days on Omolo’s world was just under 37 and a third days on his own native Mars. The middle of the Warlord’s Triumph, a week of feasting and games which the even Martian Vizier dare not excuse himself from. He sighed. Even with the astralnet, it wasn’t always easy for friends to schedule game times!