The Vizier’s Views: The Forgotten Hive

Once more, The Martian Vizier appears with his views to share, as he has several times before….

Gaming is not always face-to-face on Earth. So too does gaming take many shapes on various worlds we know but little of. The astralnet has been known far longer than role-playing games among the higher civilizations of the multiverse, but tireless advocates of gaming, such as the Martian Vizier, have turned it to that purpose. With the astralnet, a group may gather from far worlds, their astral forms almost solid as they sit around their Game Master’s table, throwing dice made of pure aether. On this night, the Martian Vizier was a guest of Omolo the Impassive, on a distant world where the Vizier’s most potent science and magic could not prevent his freezing instantly were he to appear in person. And thus it was that the Martian Vizier was introduced to the Fifth Edition Fantasy line of modules.

Fifth Edition Fantasy #12: The Forgotten Hive, is a 1st level adventure for the 5th edition of the World’s Most Popular Fantasy RPG.  The adventure was written by Bob Brinkman, of Sanctum Secorum fame, and it introduces a foe reminiscent of the elves in Margaret St. Clair’s The Shadow People, which also happens to be the first novel discussed on Sanctum Secorum! The malltod are fungal creatures, but unlike Omolo the Impassive, they are not coldly detached, but are instead a pestilent blight wherever they are active. In fact, they are sometimes known as “blight elves”.

In this module, the adventurers discover a cavern system where all is not well. A malltod excursion from deeper within the earth has altered not only the denizens of the caves, but has blighted the wood around it. Players who are expecting their foes to behave in a typical manner may be unnerved when they do not – there are kobolds, for instance, which make no pretence to stealth and an insane dryad to deal with.

It is enjoyable seeing the Dungeon Crawl Classics design aesthetics being applied to another system. Players will encounter new monsters as well as old favorites, as well as new magic, and opponents imbued with a strong Appendix N vibe. Even the idea of “death throes” is well utilized, where the death of the insane dryad grants the PCs an opportunity to gain important backstory information.

This is not to say that The Forgotten Hive is a thinly disguised DCC adventure – it is not! – but rather than it would convert well for the discerning judge willing to make an effort to do so. The author makes good use of skill checks and the advantage/disadvantage mechanics of 5th Edition. It is very clear that Bob Brinkman understands the system that he is using, and is making choices that play to its strengths.

Crossing an underground river swarming with cave pacu (giant pirhanas with disturbingly humanoid teeth) makes for an interesting problem-solving or combat encounter, depending upon how the players approach it.

Of course, if you are fighting fungal monsters underground, there always has to be at least one forest of giant fungi, and this adventure delivers on that. The set-up for the encounter – where malltod drones fling giant lizards at the PCs – is unexpected (and fun) in play. Once the encounter proper is resolved, the PCs may spend some time deciding which mushrooms they may safely eat.

Thankfully the adventure considers what happens if the party is only partially successful in removing the malltod threat. These are creatures that can come back again and again, each time more powerful, until the PCs seek them out to expunge them entirely. The adventure also includes areas that can be expanded by the GM, perhaps leading to longer expeditions far beneath the surface of the Lands We Know.

Omolo the Impassive, well known for being unreadable by his players, looked about the table with several eyes. The Martian Vizier found himself wondering how much the fungal being understood of the warm  earth-like world the adventure had been set upon. He wondered if Omolo identified more with the heroes the Vizier and his allies were playing, or the Malltods they had defeated. Without humanoid features to reveal its thoughts, the Vizier realized, he would never know what Omolo thought.

But when Omolo offered to host another game, the Martian Vizier was swift to accept. As would any of us, no doubt, had we been invited! 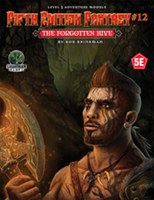