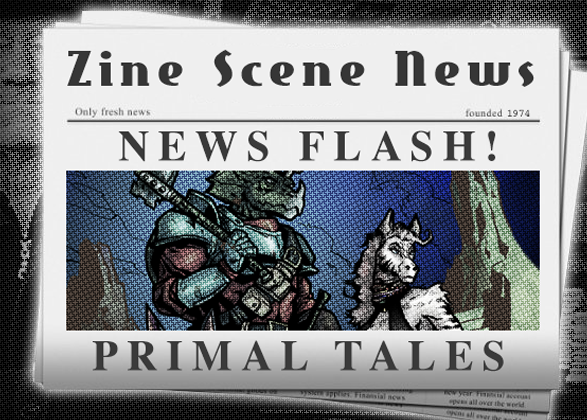 Primal Tales is a Dungeon Crawl Classics zine that focuses on the creation and use of anthropomorphic animal characters in the game. Used by themselves, anthropomorphic animals are a modern fantasy trend, but seminal beings can be found in the works of Leigh Brackett, Philip José Farmer, Michael Moorcock, Andre Norton, Roger Zelazny, and even Edgar Rice Burroughs. 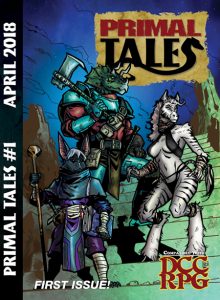 Today at the Zine Scene we are talking to the creators of Primal Tales: Allyson Brooks, Brett Brooks, and Brendan LaSalle.

(Daniel Bishop) You have been in the DCC scene for some time. Can you tell us how you got started in RPGs, and DCC in particular?

(Brendan LaSalle) I started playing in 1977, when my family went to visit friends in California. Their son had the Holmes Basic edition, and we played every day until I left. I was hooked. My first professional RPG work was Xcrawl: Adventures in the Xtreme Dungeon Crawl League, published by my fellow Primal Tales teammates from Pandahead Publishing in 2002.

I had always been a fan of Goodman Games, and when Joseph Goodman launched the original Dungeon Crawl Classics line of adventures for 3rd Edition Dungeons and Dragons, he brought me aboard to write adventures, my first being DCC # 10: The Sunless Garden. I fell in love with the DCC RPG the moment I held the core book in my hands, and I begged Joseph to let me write an adventure for his wonderful new system. My first DCC adventure was Hole in the Sky.

(Brett Brooks) Wow. How I started in RPGs goes back a LOOOONG way for me. I had just moved to Georgia, and I met a new friend who had heard of D&D. He bought the boxed set. We played it COMPLETELY wrong, but had a blast, and it just went from there.

As to DCC: my first real experience with it was about four years ago. Brendan actually introduced me to it, even though I’ve known Joseph for about 16 years now.

(Allyson Brooks) I had known of RPGs since I was in high school. I found a first edition Monster Manual that belonged to a guy I dated. I loved mythology (and still do!), and I was fascinated with what was in this book. When I asked him what was up with all the funny numbers, and he told me it was for a game. “Wow! Let’s play it!” I said. He gave me a mumbly reply of “Uh, nahh, you wouldn’t like it…” Quickly, that boy found himself to be Allyson-less.

Fast forward to…um, I believe it was 1997. Brett was running a World of Darkness game, and I sat and listened in. Suddenly, I was six years old again, and I wanted to join in on this awesome update of Let’s Pretend! I was hooked!

I learned about DCC from Brett, but it was Brendan’s fervid enthusiasm for that got me into it. Yes, the game itself is dangerously beautiful, but what makes it great are the fans! I have never seen such genuine love for a game in my life! I feel like I just want to bring them all home for a Sunday fried chicken dinner! 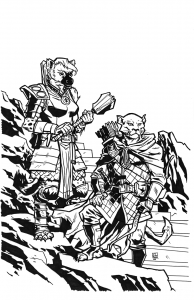 (Daniel) That sounds okay to me! But I would imagine that you’d need a really big house. Since we’re here to talk about Primal Tales, I should probably ask what motivated you to create it?

(Brett) Believe it or not, it was a fan suggestion. We were at a show—Momocon, in Atlanta—and one of the people who runs Furry Weekend Atlanta came by the booth and asked if we might consider setting up at the show. Since Allyson and I live in Atlanta, it wasn’t a big trip, so…sure, why not? And then they asked if we had anything that might be good for the furry crowd. Not really at that time, but I’ve always liked playing anthro characters, and the germ of the idea grew from there.

(Allyson) I’ve been a fan of cartoon animals since I was a wee kitten. Taking that interest and melding it into the DCC system felt like a stroke of genius. I mean, being a kickass tiger monk, a sly Brooklyn rabbit, or a good-looking cheetah with a bo staff–that’s my childhood dream right there!

(Brendan) Brett told me I could finally fulfill my dream of playing an ocelot that could Spellburn. I’m not made of stone. I can’t just turn down that level of enticement. I’m NOT MADE OF STONE!

(Daniel) Given the hours you spend running games, Brendan, I’m not sure that’s true. I’m betting it was the offer of fried chicken that pushed you over the edge!

The first issue of Primal Tales has been out for a while now. People have had a chance to see it and digest it. How was it received?

(Brett) Thankfully, very well! It’s the type of book that can get the “furry” label and fall into a super-niche area. We didn’t create it that way. While yes, it will appeal to that fan-base, it’s actually meant to create an entirely new aspect to any DCC game. And it will move into the MCC realm with future issues by expanding on how Manimals work.

(Allyson) I have been giddy with the response! So many players have told me how much fun they’ve been having with it. Especially little kids–they’ll re-enact every scene for you in that way that’s reminiscent of my great-uncle Bob showing you every choke-hold that Bruno Sammartino put on “Nature Boy” Buddy Rogers. It’s…entertaining!

(Daniel) I’m looking forward to that Manimal expansion. I know that there are people who want their Manimal stock to matter more, and Primal Tales seems geared to meeting that demand! What other plans do you have for future issues?

(Brett) Well, as I just mentioned, it will be moving into the MCC arena. There will also be a whole issue devoted the idea of creating “taur” characters. Plus, we’ll be doing a serialized version of a city soon. We’re going to split a fairly large primal city into four sections and write up each section in separate issues. Assuming we can get that one lazy writer to finish all that work he needs to get done! He’s useless! …oh wait, that’s me.

(Allyson) (warms up the cattle prod and waves it menacingly)

(Daniel) Careful with that thing, Allyson. You could put an eye out.

Okay, the Manimal connection to MCC is pretty clear! How would you use this material in more standard DCC campaigns? 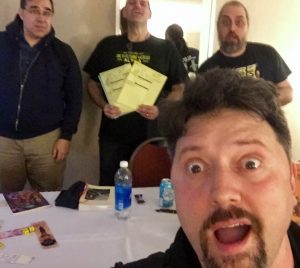 (Brendan) I could see making primals a factor in a more standard DCC campaign – they could be humanity’s rivals for resources and power, or they could be mysterious allies that join in the struggle against dark forces. I could also see running any of the primal character classes as “strangers in a strange land,” the only one or few of their kind that explore human lands, and band together with human, dwarf, elf, and halfling adventurers, becoming their mysterious allies, or perhaps rivals. The new patron, Lamia, would be a great addition to any standard game.

(Brett) The reason that we’ve structured Primal Tales in its current format (no plan to change it, but you never know!) is so that people CAN use the material in any way they see fit. It allows Judges and players to add in a whole sub-culture into their world. They can have it be outlying and like an undiscovered tribe in a desolate area, or as a major part of their world. They can even make them the enemy of the non-primal races! 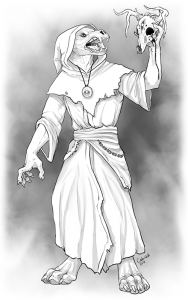 One interesting thing, in the second issue we introduce something called “The Cult of Romeau.” This is a group of primals who actually HATE other primals. They worship humans as god-like creatures and strive to be more like them. To the point where they will mutilate themselves to look more like a human—though most of the time they end up looking more monstrous. It’s an interesting take on the role of primals in the world, and creates an enemy for primal PCs that come from inside their own world.

(Daniel) Shades of The Island of Dr. Moreau.

(Allyson) In my mind, Primal Tales IS DCC! It seamlessly works in. I don’t see why a character that survives the funnel couldn’t become that legendary sword-wielding lion fighter or (in the case of MCC) that wild-west robot horse toting a blunderbuss. Be it an NPC or a PC, it flows right into the game and gives the story a kick!

(Brendan) I have the honor of being the Judge for the first ever playtest of Primal Tales. My game set a group of stalwart primals against a terrible cult of misguide primals that meant to strip their brethren of their animal natures and transform them into something altogether unnatural: mankind. That was a great game, and the first time in much too long that I was able to run a game for Brett and Allyson brooks, which is always a fantastic time.

(Brett) Like Brendan just said, when we were play-testing the character classes for Primal Tales, Brendan ran an adventure for us that pit us against what would become The Cult of Romeau. At the time he called them “The Cult of the Hoo-Man,” which is funny, but doesn’t match up with what they became.

My character, Nekisa, had Ventriloquism as one of her only spells at that time. (It was before the Shaman class was fleshed out.) She ended up beating the entire group of bad guys by spellburning to the point where they were convinced a gigantic beast was roaring its way up behind us to attack. The sound of trees being destroyed, screams, the full deal. The bad guys ran away in abject terror! To me, that’s a great example of one of the cool things you can do in the DCC RPG system with a spell that many might consider useless.

(Daniel) Now, because this is Primal Tales, I have to ask you: If you could be any animal, which would it be, and why? 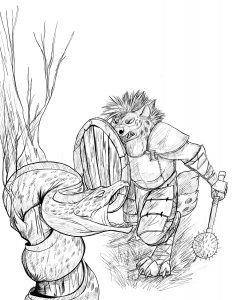 (Brett) Actual animal? Probably none. Unless it would be a tortoise, so I could live super long and see what happens in the world to come.

Now, as far as anthro-animals go, since my two Primal Tales characters are Nekisa the zebra and Bree the hyena, I think you can guess—but a big cat would probably be cool, too.

(Allyson) A coyote! They’re smart survivalists and they have a great sense of humor.

(Brendan) Assuming I couldn’t choose to be a human who was better than me in every way and much younger, I would choose to be a raccoon, the ultimate suburban adventurer. I would be that nightmare raccoon that would sneak in your doggie door and help themself to all the cat food, plus any human food you thoughtfully left out. I would be the garbage-raider, the terror of terriers, and star of a thousand “holy crap look what this raccoon did” YouTube videos.

(Daniel) See? I knew Brendan was after the fried chicken.

Thank you for your time!

(Brett) Anytime! I’m such a shy person. I hate talking to people about things, so this gave me a chance to break out of that shell….

You can purchase the first issue of Primal Tales in our online store! And to hear a review of the book, check out this week’s episode of Sanctum Secorum, where they give their opinions of the first issue! 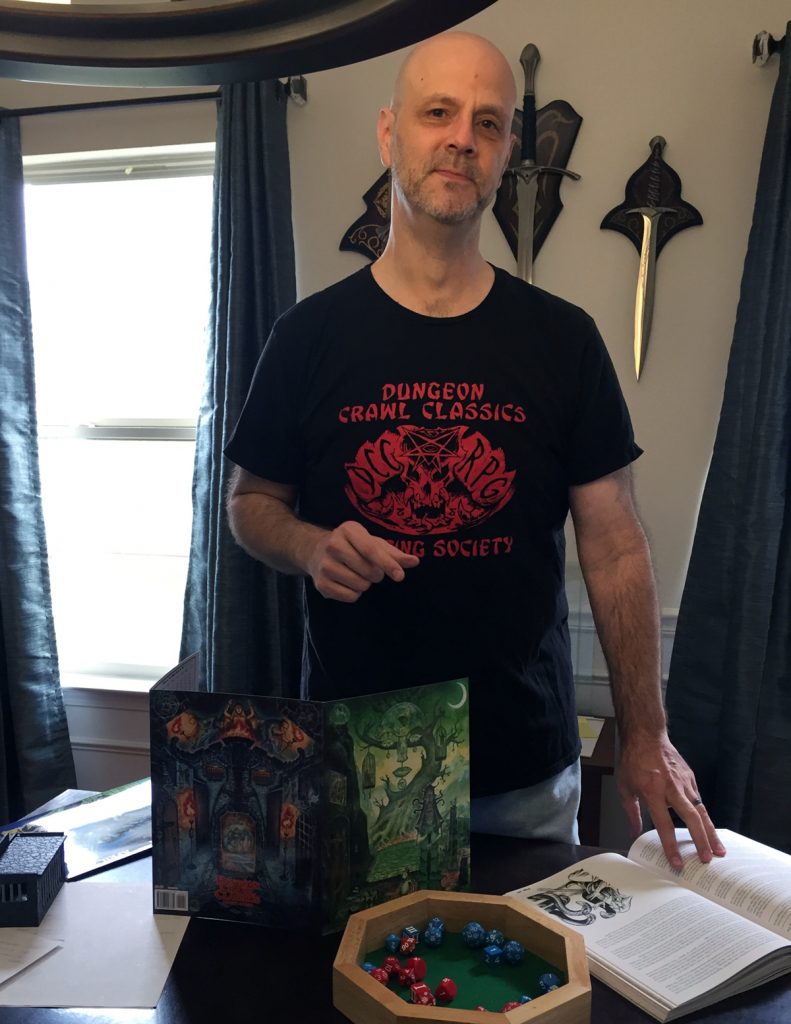