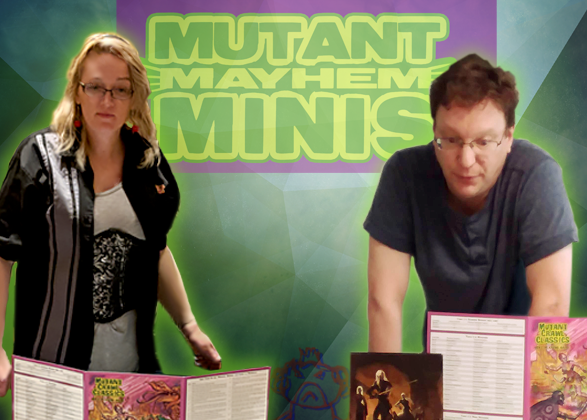 The ongoing Mutant Mayhem Minis Kickstarter is already a huge success! With just over two weeks to go (at the time of this writing) they are already up to their fourth stretch goal, and well on their way to several others! These licensed miniatures for Mutant Crawl Classics look great, and are the perfect addition to any MCC RPG game. Our own Brendan LaSalle took time out to speak with And and Erica, the creative minds behind this campaign, to get some further insight into the creation of the minis, Kickstarter, and much more.

So check out the Kickstarter, and prepare yourself for the Mutant Mayhem Mini Mint…er, INTERview!

Tell us about the Mutant Mayhem Minis Kickstarter. 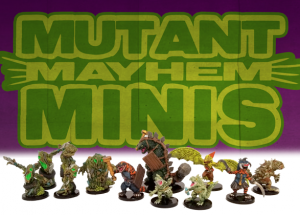 (Andy): I have a history of going overboard making props and minis whenever my wife runs games at Gen Con. Well, this year she convinced me to run a couple games too, so I went way overboard. I sculpted A LOT of minis for our Mutant Crawl Classics Gen Con games. By the time I was done, it really looked like the beginnings of a line. I approached Joe (Goodman) about the idea, and he thought it was great. We set up a license so I could publish them as official MCC supplements, and now it is time to bring them to the people.

(Erica): It’s exactly like Andy said it. I wanted to run games at Gen Con, and I convinced him to run some games as well. We had a lot of fun deciding what characters he was going to make, and I loved the whole process. I found a great online character generator and went to town. We picked the best and most interesting looking characters and he made them into minis. Even after we hit the agreed-upon number of characters for the game, he decided to do just a few more to give the players enough options. Then there was creating the adventures, that was a brainstorming challenge onto itself. Of course, during that process Andy decided he needed a bunch of custom monsters. Afterwards, after some thinking he decided he needed a Kickstarter, and here we are.

Are any of the Mutant Mayhem Minis your characters, or NPCs you have used in specific games?

(Erica): As I stated above, most of the characters were created by a random generator, but Harold the plantient is my son’s character. My son rolled up this character fair and square, and diligently wrote every piece of junk and trinket he found onto his character sheet. The flower pot helmet was his best idea. He saw that his plantients had a percent chance to hide in any outdoor setting by remaining still and looking like a plant. Like a true gamer he then asked, “Since I have this nice flower pot helmet now, can I stand on my head and hide indoors as well?” 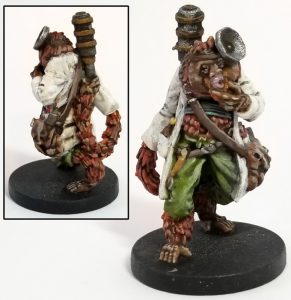 (Andy): Dok-Tor Zay-Iss is my character, who was also rolled up right from the charts in the book. I love him…he’s great and goofy and a blithering idiot who thinks he’s a genius. He’s not hostile about it or anything, and always gives the other characters credit for solving the thing he couldn’t, so he doesn’t come off as annoying when I play him. Just funny. So funny. At least, I laugh a lot.

(Erica): Even though I created most of the characters’ stats and powers from a random generator, I still had to flush out the character sheets. I added equipment and personal items, and in most cases I tried to add a little bit of personality to the character that the players could easily latch onto. Little things like Mistur Tode is bossy, or Bob-Dar the Bob-barian doesn’t like personal pronouns. I had fun, and I think I think most of the players who played theses PCs had fun as well.

How did you first become involved with Goodman Games?

(Andy): It was through Erica initially. She was running some tournament events at Gen Con. I was busy doing my own thing a lot, but I did want to help her make her games super-cool, so I would assist by making maps, props, and the occasional custom mini.

At some point, those figures came to Joe’s attention, and they got added to his Dungeon Crawl Classics miniatures line. After that, I even got a few commissions from him to sculpt a few more pieces for the line. They eventually got out of minis, but I still kept making stuff for Erica’s games. 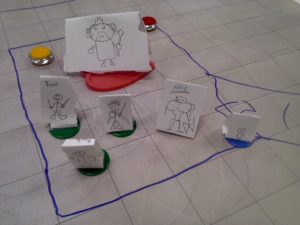 (Erica): I stared running tournament adventures for Goodman Games in Year 2. I started with Vault of the Dragon Kings, and ran it all the way up through 3.5, and into the last tournament in 4e. Over the years I ran a lot of tables of tournament, including the upper level tables and finals. I had a lot of input into how the judges would judge things so that everyone had the same tournament experience. The DCC tournaments were a great experience for me as a GM. In fact, I almost got to run a table for Monte Cook, in year 4. Unfortunately, he dropped before the round started. I was considering being a GM for the tournament this year but decided to do MCC instead.

At some point after the tournaments stopped I ran into Brendan and played in one of his Xcrawl games. I loved Xcrawl, and I loved Brendan’s infectious excitement over things. We got to talking and for four or five years I have been running Xcrawl at cons and helping him out playtesting.

What have y’all been playing/ running this year?

(Andy): We’re always doing a couple D&D games…well, Pathfinder, really. We still use D&D as just like the generic term. We do Mutant Crawl Classics on a weekday many weeks – whenever we can get everyone together. We just started playing with the Pathfinder second edition playtest stuff. Board game nights in recent memory we have played Settlers of Catan, Fallout the Board Game, and Battletech.

(Erica): As Andy stated, we play lots of D&D. We play board games when we don’t have enough players, and I like the miniature game Dark Age. Andy has even done some custom sculpts for Dark Age (minis that had stats but no model). We started MCC as soon as we got the PDFs. It was hard at first just playing with iPads. But soon I printed out enough handouts, and eventually we got the book. We play Xcrawl a few times a year, but mostly just in preparation for the convention. I would love to get an Xcrawl campaign going, but there is never enough time in a week.

The Mutant Mayhem Minis Kickstarter has already succeeded – congratulations! What advice would you share with other folks with gaming-related Kickstarters?

(Andy): I think “succeed” is a premature term. “Funded’ is certainly accurate, and for that I am super grateful to all the fans of old-school post-apocalypse gaming out there. I think we will have succeeded when the last backer rewards have arrived safely at their destination. There’s still a lot of hard work to do to make that happen, but fortunately it’s all in my wheelhouse, so I’m looking forward to making it happen!

Is there anything special you would like to achieve with this kickstarter? 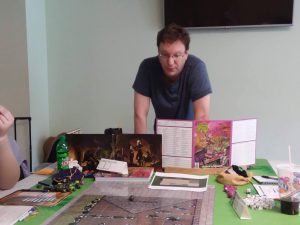 (Erica): I love MCC and its Gamma World source material, and I know Andy does as well. I would love for Andy to be able to sculpt so many more of the old monsters from Gamma World or MCC. The Sep aka Land Shark, the multi-limbed Orlens, and the wingless skeeters; there were so many cool monsters. So hopefully if this Kickstarter is super-successful or possibly on another I would love to see Andy make some of these sculpts.

Also, after this completes we are going to try to put together the two adventures we ran at Gen Con and get them published. As you can see some of the monsters from the Kickstarter have some clear themes that tie into our adventures, and we hope to start on getting those adventures available as soon as this Kickstarter wraps up.

Let’s look at some pictures! Tell us about them. 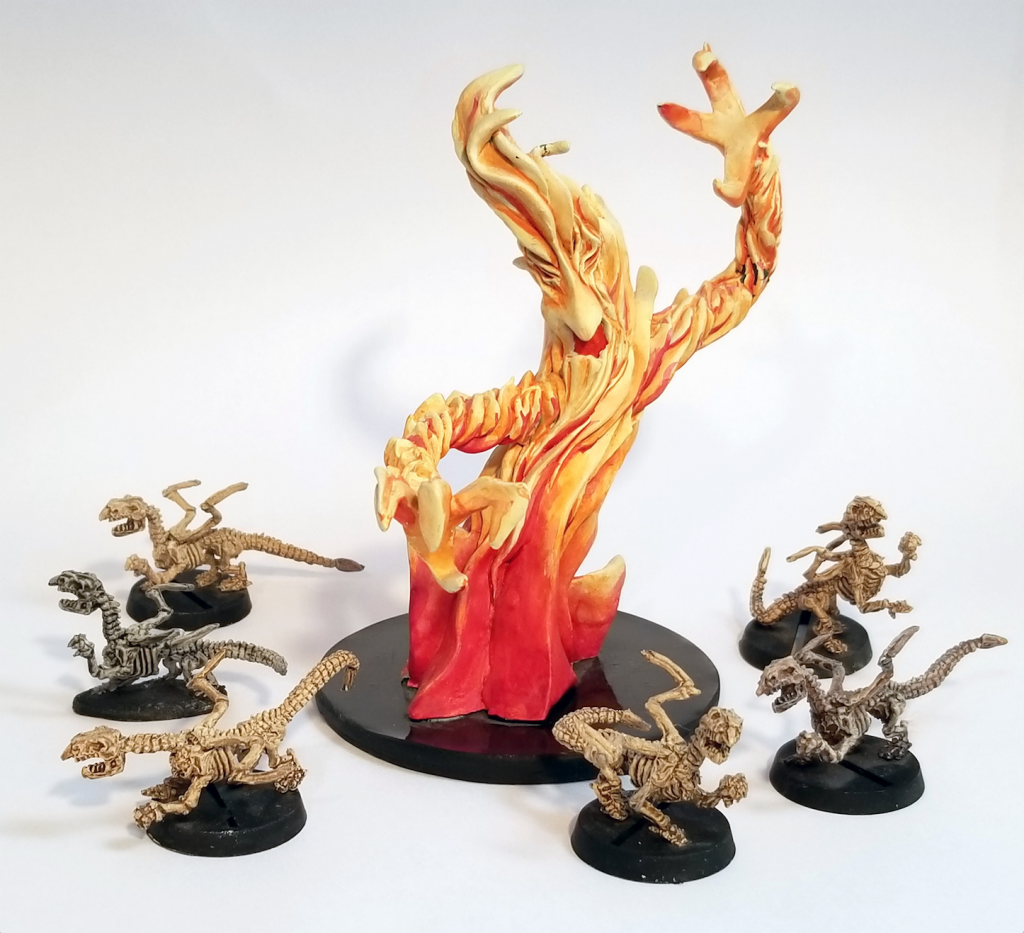 (Andy): This was an elder fire elemental, and some skeletal dragons. They were the first custom sculpts I think I did for any of Erica’s Goodman tournaments. 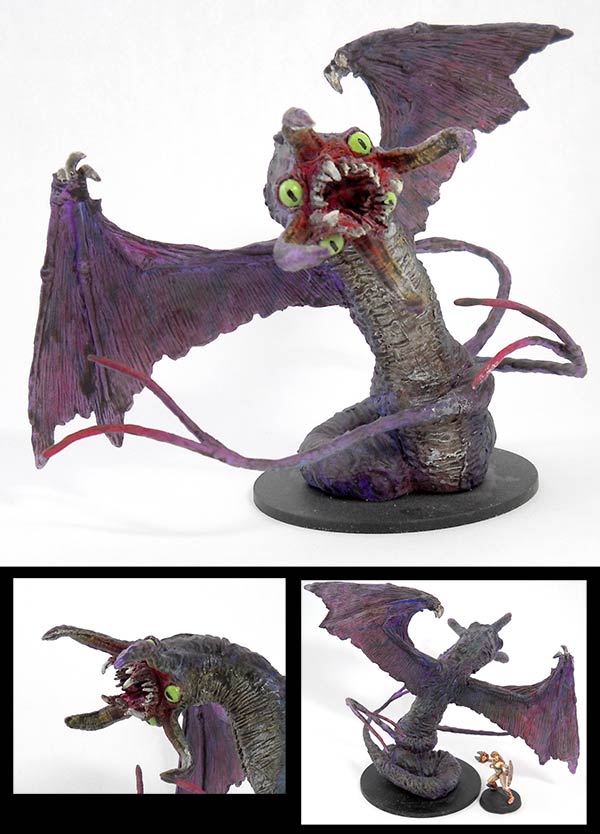 (Andy): This monster was used as a stand in for an MCC Yvox. It is a pretty close mode and was very impressive and scary in the games. It was originally from a previous Kickstarter I ran, but I hope to modify it to be more like the Yvox in the MCC book and make it available as an add-on at some point. 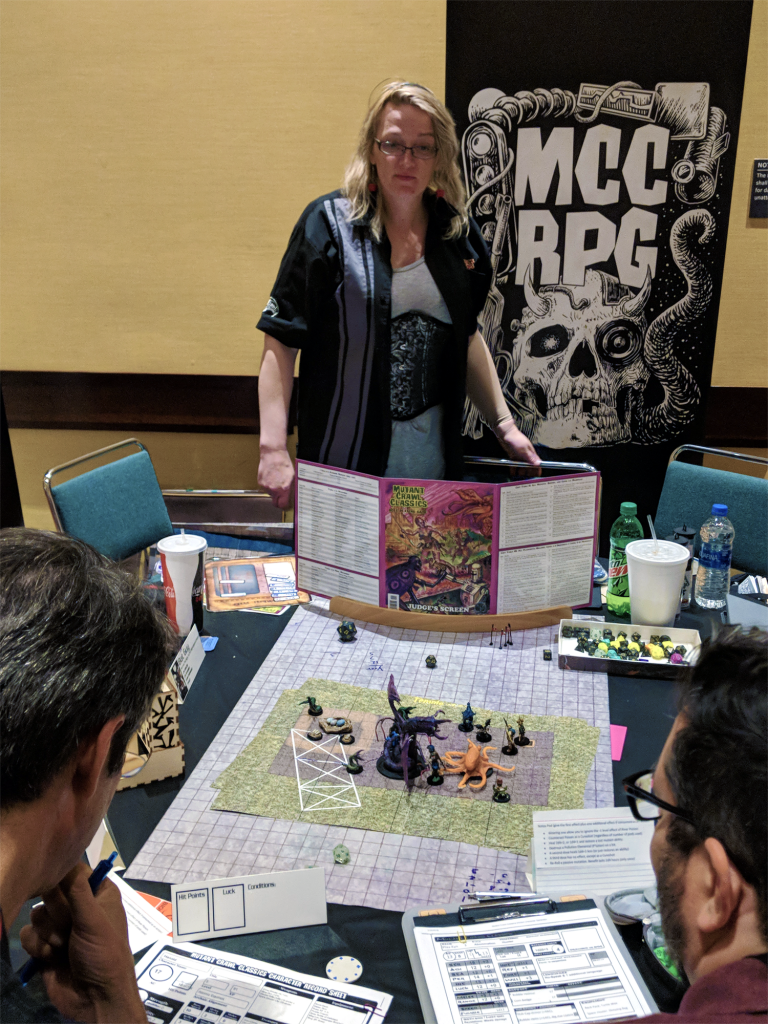 (Erica): These is a pic of one of our MCC games from Gen Con.

Head on over to the Mutant Mayhem Minis Kickstarter today and see about hitting some new stretch goals!