The Vizier’s Views: The Queen of Elfland’s Son

It has been many long years since the Martian Vizier last walked the green fields of Earth. For him, the Lands that We Know are an exotic country. His library is vast, and it contains many works that cross into Appendix N as it had been compiled by Gary Gygax. He reads Lord Dunsany like we read Edgar Rice Burroughs, not with a wistful and dreamlike longing for an imaginary past, but with a thrill of high adventure on an alien world.

The Queen of Elfland’s Son is a 1st level DCC RPG adventure written by Michael Curtis. The title is an homage to The King of Elfland’s Daughter, by Lord Dunsany…and it shows throughout the writing.  This is actually the second Michael Curtis homage to Lord Dunsany. The first was Gnole House, published for Free RPG Day in 2017. Both adventures showcase how the author understands the works of others, and his flair for growing eminently playable scenarios from their roots.

The adventure begins with the PCs being asked to solve a series of mysterious attacks in a rural environment. It then moves into an exploration of a fairy mound linking Elfland and the Lands We Know. Both parts of the adventure are fully fleshed out and entertaining. Moving from one section to the next creates a shift in the tone of the adventure, from dark mystery to wonder (and even amusement). Before all is over the two tones become a unified harmony.

The judge is given plenty of opportunities to role-play. In particular, the contrast between Old Marrow, a farmer in the village of Eng, and Thwart-a-Throt, the elf-mound’s butler, help to cement in the players’ minds that Elfland and Eng are not the same place. Each of the significant NPCs is given sufficient direction so that the judge can make them individuals. Even NPCs that might help the players achieve their goals are not necessarily without drawbacks.

As the title implies, this adventure alters the core rulebook’s King of Elfland by giving him a consort, the Queen of Elfland, who shares the rule of Elfland. Each gains dominance over the other as the powers of Seelie and Unseelie Courts wax and wane. It is a pity that Michael Curtis didn’t include a patron write-up for the Queen of Elfland, but there is always hope for future expansions. The author knows his stuff, and, although he has his own take on Elfland, nothing herein will prevent you from using third-party faerie-based materials, like Angels, Daemons, and Beings Between Vol. 2: Elfland Edition.

The last die hit the table, and the last foe fell before Brondar of the Wastes. The Martian Warlord grinned with a fierce joy. His eyes gleamed as he looked about the table at old comrades-in-arms and at the Martian Vizier perched behind his judge’s screen. They all had new personas to try in this fictional world, and Brondar of the Wastes was his.

“This writer…” the Warlord said “…This Curtis. He also devised The Dungeon Alphabet? And these Shuddering Mountains you told me of?”

“The Shudder Mountains,” the Martian Vizier replied. “Among other things. Most recent is a compilation depicting adventures in the fabled city of Lankhmar.” The Vizier paused, and then sighed. There was no way to mistake the flickering glow in the Warlord’s eyes.  “Of course, My Lord,” he said. “I shall bring him to you….”

The Queen of Elfland’s Son 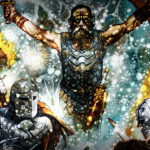