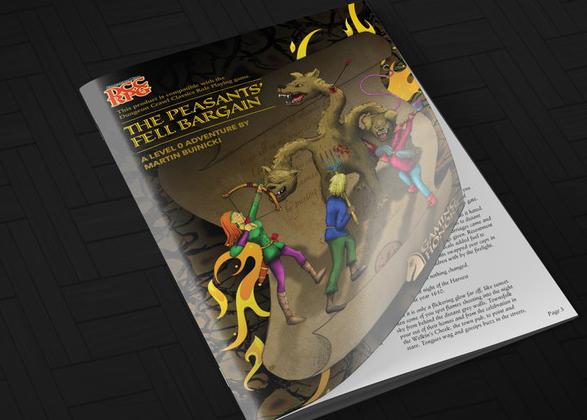 We’ve said it before, but we love and support all of our third-party publishers! To that end, we want to point you over to the folks from Gaming Honors and their new Kickstarter for The Peasants’ Fell Bargain! 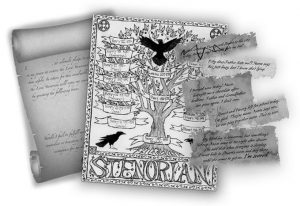 The Peasants’ Fell Bargain is a zero-level adventure compatible with the Dungeon Crawl Classics Role-Playing Game. Available in print or PDF and featuring twenty-eight action-packed pages, this fully-illustrated adventure inspired by classic horror tales will put your peasants to the ultimate test as they search for the Lord Stenorian’s missing son.

For generations your village has lived and worked in the shadow of the Stenorian estate, which sits perched like an ancient bird of prey on a promontory at the edge of the mountains. You eked out a hard living through logging, mining, or planting the rocky Stenorian lands. Each year you made the three-mile trip up the mountain to pay rent and tribute to the men-at-arms standing watch at the keep’s gate….The years went by, and nothing changed.

Now the Lord Stenorian himself has come, begging for your help. “My men are slain, my father is missing, and I have nowhere else to turn. My son! My son Michael is still hiding somewhere in the keep. Find him! Save him! Do this for me, and I will reward you beyond your wildest imaginings.” His eyes burn with a frightening intensity. “Hear me. Return my boy to me, and ask what you will. I promise you, if it is in my power, I will grant it.” These last words seem to echo inside your minds as visions of a new future for you and your family float before you.

What more noble cause do you need? There is a child in need—and a child of nobility no less!—and this is your chance to rake the nobleman over the coals and get whatever you want by returning his son to him! Sure all of his guards have gone missing when they went looking! Of course there are tales of horror and dread that surround what happened to the boy! But this is your chance! You get to go off and come back a hero! …if you come back, anyway.

The Peasants’ Fell Bargain is a new Kickstarter for a zero-level funnel for Dungeon Crawl Classics. The product is being produced by Gaming Honors, and is not from Goodman Games. We just want to show our support!

Head on over to Kickstarter and show your love!