Tales From the Magician’s Skull PDF Now On Sale! 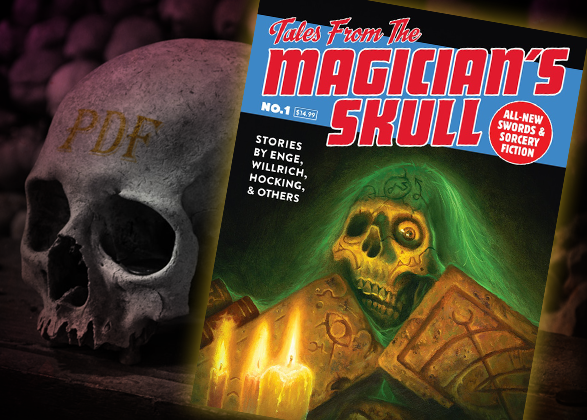 LISTEN IF YOU DARE!

THOSE WHO HAVE DEEMED IT TOO DANGEROUS TO POSSESS A PHYSICAL COPY OF THE CHRONICLES I RELATE MAY NOW EASE THEIR SO-CALLED MINDS! MY ETERNAL BENEVOLENCE HAS GRANTED ME THE WISDOM—NAY, THE JUDICIOUSNESS!—TO GRANT YOU THE MEANS TO REVEL IN MY INEXACTITUDE RETELLINGS OF RENOWN!

YOU MAY NOW ACT ACCORDING TO YOUR DESIRES.

THE SKULL HAS SPOKEN!

If you are one of those people who only like to read a book on your electronic device, then we’ve got some great news.

The first issue of Tales From the Magician’s Skull is now available as a PDF in our Online Store! You can get all of the material from the first issue in a convenient, electronic format. Each story is lovingly illustrated by industry stalwarts, and issue #1 features art by Jennell Jaquays, Doug Kovacs, Willam McAusland, Brad McDevitt, Ian Miller, Russ Nicholson, and Stefan Poag.

Here are the stories in the first issue: 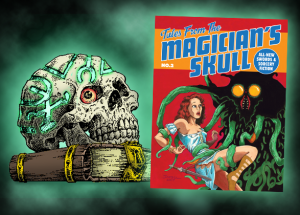 And if you are one of the people who backed both the first and the second issue on Kickstarter, we have some bonus good news. The SECOND issue of Tales From the Magician’s Skull will be shipping out to you folks soon!

That’s right, the second issue is just about to ship out slightly ahead of schedule. We’ll give you specifics soon, but it’s time to get excited for the next stage of the Skull’s grand storytelling plan! 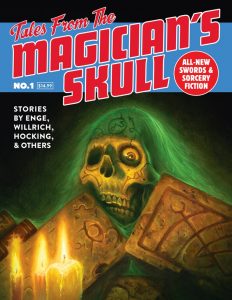 Tales From the Magician’s Skull #1 PDF