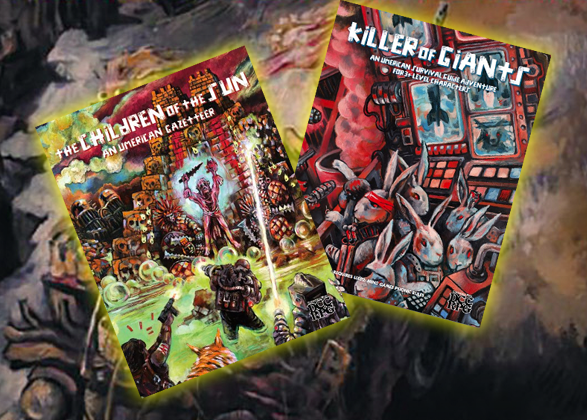 The Shield of Faith guys have put something new together, and we’ve got it ready for you!

A pair of new supplements for The Umerican Survival Guide have hit our online store, and we’ve got the details! 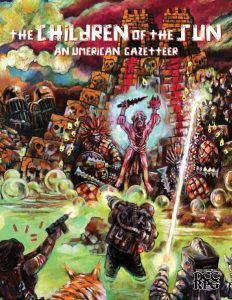 First up, we’ve got The Children of the Sun. This 54-page supplement for Dungeon Crawl Classics is an Umerican gazetteer for the Valley of Mexico including new classes, a new Patron, and a host of new monsters. Inside, you’ll also find rules for creating People of the Sun characters, including new occupations and two new classes: The Half-Blood and The Jaguar Knight. 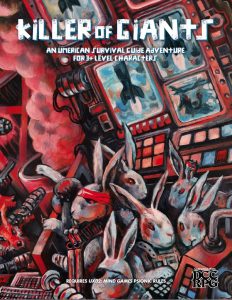 At the same time, Shield of Faith has released The Killer of Giants, an Umerican adventure for 3+ level characters. The protections surrounding an ancient military base, home to the fabled “Killer of Giants,” are down! The denizens of Umerica have flocked to the base to grab what they can and establish dominance over this post-apocalyptic treasure trove. Killer of Giants is usable in your existing campaign or as the jumping-off point for any number of long-term campaigns.

And if you haven’t seen it—and you most definitely should—we’ve still got both editions of The Umerican Survival Guide in stock, the Delve Cover and the Chase Cover. Both covers have identical interiors, presenting a gonzo post-apocalyptic campaign setting and sourcebook based on the articles from Crawling Under a Broken Moon.

Speaking of Crawling Under a Broken Moon, we also just got a huge restock on back issues of the zine, including issue #1 and issue #4, which were previously unavailable. You should act soon, however, as the zines are mostly out of print from the publisher as they work on producing a compilation. Get them while you can!

Both The Children of the Sun and The Killer of Giants are products published by Shield of Faith, as a part of The Umerican Survival Guide setting, and are fully compatible with the Dungeon Crawl Classics role-playing game.