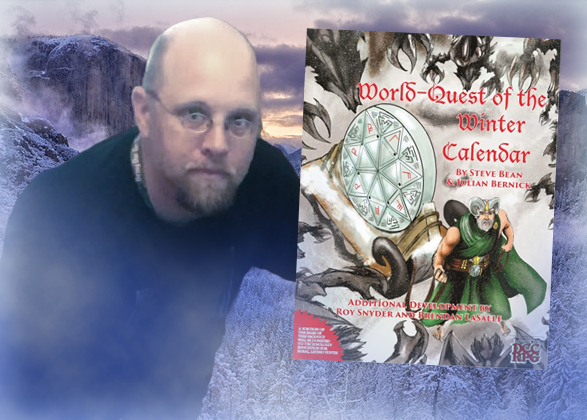 Introduction to World-Quest of the Winter Calendar

Its winter festival week and you and your fellow villagers are out foraging in the snow-clad evergreen forests of your homeland. You come upon an old man dragging a sledge through a clearing. Loaded on the sledge is a large wheel-shaped sculpture wrought in the purest silver – a seven-day advent calendar marking the same high holy week your festival will soon celebrate! But the old man is being assaulted by a swarm of simulacra shaped like demonic sprites and forged out of scraps of barbed wire.

The old man is Laylokan- a neutral god. His burden is the Winter Calendar, a mystical conduit into a living morality tale called the Krytz Mystery. The Mystery is a tale of the murder of one god, the birth of another, and the high cost to humanity that comes with restoring the cosmic balance. It is a tale that was lost… until now. Your PC peasants are drawn into the Winter Calendar where they must survive, bear witness to its seven chapters, and determine the higher meaning – the moral – of the Krytz Mystery. But there’s a catch (there always is when you’re dealing with gods) – the PCs’ very act of interpreting the tale fuels a “great making” – a cosmic-scale, metaphysical ritual that will change the very nature of existence and make the world a very, VERY different place than it was when the PCs started the adventure. 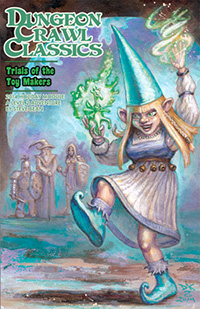 2014 Holiday Module: Trials of the Toy-Makers

It was early 2015 and it was the depths of winter (not that that matters much to an upstate-New York-born-and-bred boy living on the Central California Coast). I had just gotten my first full-length adventure for the Dungeon Crawl Classics RPG published  – the 2014 Holiday Adventure Trials of the Toymakers. I’m generally a bit of a Scrooge when it comes to Christmas time but writing Trials – a murder mystery in which the DCC equivalent of Santa’s elves were the victims – had me in one of my best holiday moods ever.

One of the classic things from Xmas that has always captured my imagination is the advent calendar. Hanging from a nail or standing, screen-like, advent calendars use little pockets or pouches enclosed by doors or flaps to count down the last 25 days until Christmas. The calendars’ “day-marcating” doors operate against the backdrop of a large piece of art. That art always seemed to be trying to tell me an entire story in single, 1000-word proxy. As a kid I played with my advent calendar much the same way that I played with vinyl Colorforms: imagining the story depicted by the calendar slowly playing out as I opened each door. In the 70s, my advent calendars usually contained candy or small, cheap plastic toys, but originally, the purpose of an advent calendar was to tell a story – usually a Biblical story. Behind each door was one part of the story could be found, written in prose or poetry slips of paper. 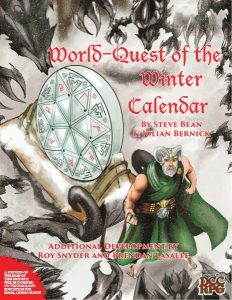 This historical version of the advent calendar screamed “mystical artifact” to me and got me started on the project that  eventually became the first-ever Steve Bean Games 3PP publication for the Dungeon Crawl Classics RPG: World-Quest of the Winter Calendar: A “World-Shaping” Zero Level Funnel. Julian Bernick, of Spellburn, Nowhere City Nights and Mutant Crawl Classics fame came on board to write half of the encounters and Brendan LaSalle and Roy Snyder helped us develop what became the “world-shaping mechanic.” 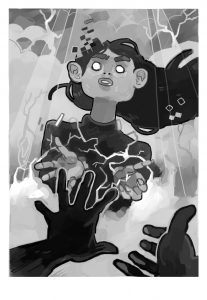 I’m ecstatic to have this opportunity to promote World-Quest because I think many DCC Judges haven’t seen the product. When Julian and I started writing it there were relatively few 0-level funnels on the market. Now there are oodles of them and I think World-Quest has gotten lost in the crowd. I think that’s a shame because I think its “world-shaping” mechanic makes World-Quest unique, and makes it a particularly exciting choice for “funnel veterans” starting a new, ongoing DCC RPG campaign. World-Quest is a character funnel, but the “world-shaping mechanic” also makes it a “campaign-setting funnel” that will radically alter – in both narrative and mechanical terms – the campaign world concept the Judge has in mind when the campaign starts. 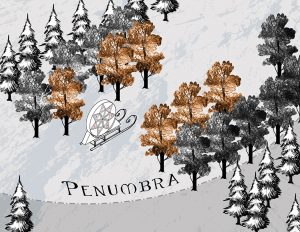 The way this works is that there are four points in the adventure when the PCs break up into three groups to interpret the living morality tale they’ve been thrust into. One group adopts a Lawful perspective and decides what the moral is for the portion of the Krytz Mystery they’ve seen up to that point. The second group decides the moral from the perspective of Chaos. The third group adopts the Neutral perspective to determine the better moral. The winning moral tilts the Balance in favor of the alignment perspective that guided it and this changes an important aspect of the PCs’ world – permanently. This might change the nature of government or religion, determine how warlike or peaceable the world is, or change the very nature of morality and ethics. The changes can alter the world’s geographical landscape, its weather, which races exist, or which gods and patrons populate the world’s pantheons.

World-Quest is Six Gifts in One: Five DCC RPG Products Plus SBG Makes a Charitable Donation to a Good Cause

World-Quest is a hell of a value at $13, if I do say so myself. The product contains a 28-page zero-level-character-and-campaign-setting funnel adventure, a brand new class, and two new, fully-developed patrons with all the necessary tables and three new patron spells for each patron. It features some stunning interior illustrations and cartography by RPG veteran artist, designer, writer, and publisher Thomas Denmark, as well as art from talented newcomers Nathan Campos, Lyle Lynde, and Danny Huynh. 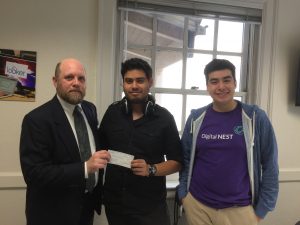 Steve Bean handing a check to Marcus Cisneros for his work laying out WQ. Next to him is cover and interior artist Nathan Campos.

And in case you need still another reason to buy a copy of World-Quest, consider this: Christmas is the season of charitable giving and I donate a portion of my publisher profits from sales of World-Quest to the Digital NEST. Digital NEST is a tech workforce training center in rural Watsonville, CA – “the strawberry capital of the world.” The NEST is training the predominantly Latino youth of Watsonville for 21st century tech careers, youth whose parents typically work harvesting crops by hand in the vast agricultural fields surrounding Watsonville. World-Quest’s spectacular full-color cover was done by a NEST trainee – Nathan Campos – and the layout was done by another trainee – Marcus Cisneros – both of whom I paid as contractors; it was Nathan’s first-ever paid gig as an illustrator!

Be sure to check out World-Quest of the Winter Calendar from Steve Bean Games!

The first person who correctly identifies the name of the famous Christmas fable that the morality tale in World-Quest is based on will win a free copy of the next Steve Bean Games product to be published – Shade Hunter. Anyone involved in the development of the product would be excluded from the contest. You must EMAIL YOUR ANSWER TO US. No purchase necessary and the rest of the legal stuff. It’s just a fun contest, after all. This section of the post is subject to be taken down once the correct answer is received. 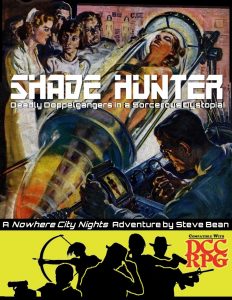