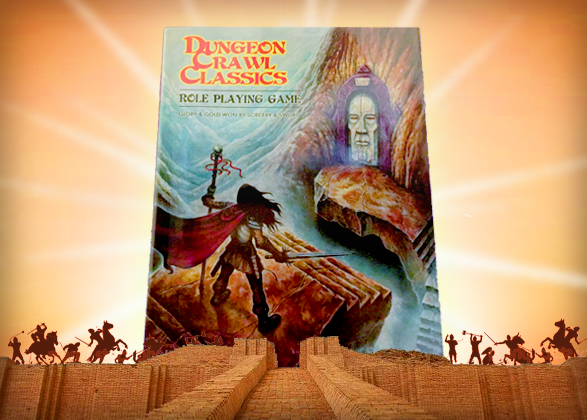 It’s been five years since The Dungeon Crawl Classics RPG first released to stores, and we’ve seen a lot of reviews in that time. Gamers are generally blown away when they first encounter DCC. Even now we still routinely hear from gamers who can’t believe what they’ve encountered. It’s fun to read the reviews and hear about these fun encounters. And you’d think, after six printings and many thousands of copies sold, that it would be hard to narrow down to our favorite review. But no, it’s not hard at all. Five years later, we clearly remember our favorite review ever of DCC RPG. It’s the review that had this to say about DCC RPG:

This isn’t your father’s D&D…it’s your batsh*t crazy uncles’ D&D, straight from the smokey basement with faded black-light posters on the walls and 80’s Manowar blaring on the old tape deck. You might turn up your nose at first, but once the seven-sided-dice start rolling you find yourself sucked in.

Five years later, we’d like to publicly state that we are still proud to be the batsh*t crazy uncle of the D&D community. Here’s to five more years and many more batsh*t crazy games of DCC RPG. 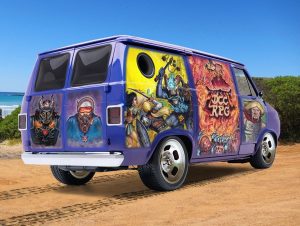 And if you’d like to read some other reviews of DCC RPG, here are some others that we like!

RPG Knights: “So I am sorry to all of you who have been telling me for so long to give this a look. Mea Culpa. I have now and it truly is a special game.”

Word of Stelios: “The more I play Dungeon Crawl Classics RPG the more I want to play it. It’s gotten the “jaded gamer” in me excited about playing a d20-based system again.”

Bernie the Flumph: “Oh my god, I love Dungeon Crawl Classics. This isn’t a review of DCC; there are plenty of those out there. Let me just tell you what sold me on the game.”

The British Fantasy Society: “I think anybody who gives this game a chance will find it to be a lot of wild and dark fun. I begrudgingly gave it a chance, and I’ve fallen in love with Dungeon Crawl Classics.”

RPG Resource: “This does indeed do what it says on the tin: the full heady flavour of early fantasy gaming coupled with elegant thoughtful rules that show considered understanding of a good thirty years of game development. And it comes redolent with images of the kind that take you right back to those early days.”

The Semi-Retired Gamer: “I can honestly say that if DCC RPG plays as well as it reads then it will be my new game of choice.”

RPG Geek Fan Review: “I really like DCC RPG after just one read through the rules. I have plans to get this to the table as quickly as possible, because I want to experience the old school style once again. I think this book and system will become a mainstay of my RPG collection and will get it fair share of mileage over the coming years.”

Black Gate: “There are any number of things I love about the DCC role-playing game, but I think my very favorite may be the implementation of spell battles. We read about spell battles in books, and we’ve seen them in a host of movies, but I’ve never yet seen any role-playing game that enables the moment from, say Harry Potter and the Mumblety Something when Voldemort and Dumbledore exchange spell after dangerous spell, shaking one off to cast another. An inventive segment of the rules in DCC actually allows gamers to emulate those very scenes.” 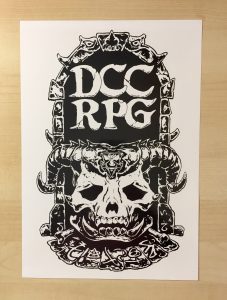 Dakka Dakka: “Whatever other problems WotC might face, the real trouble is that the DCC RPG has already been released. And the DCC RPG is the best D&D-inspired RPG that has ever been written.”

Tower of the Lonely GM: “Goodman Games created an original and beautifully illustrated tome of pure awesomeness and made it seem easy.”

Communizine: “Execution is everything, and this is one game that has been executed flawlessly.”

Neuroglyph Games: “One of the things I like about this game is that it handles itself so completely respectful of the “old school” material, and brings some new ideas and mechanics which are likely to be quite inspirational to heroic fantasy roleplaying. And yet it is completely unapologetic about its nature, and doesn’t pull any punches about the style of roleplaying aimed at what might be considered by many to be a “grognard” audience.”

The Machination: “Dungeon Crawl Classics is like D&D’s weird cousin with monkey skulls in his closet.”

RPG Now Fan Reviews: “The DCC RPG is the most pleasant surprise of the year. It’s a game that not only captures the feeling of old-school gaming and appendix-N literature, but does it with the use of innovative and fun game mechanics and with the help of writing that’s going to have an impact on how you play and run your games.”

Skull Crushing for Great Justice: “Okay…DCC is one of the first D&D-like RPGs I’ve read in a long time that makes me want to play it.”

The Iron Tavern: “If you hold some nostalgia for your initial forays into gaming and those initial forays were back in the late 70’s or early 80’s you need to check Dungeon Crawl Classics RPG out. There will be some fun times ahead!”

Sword and Board: “This strikes me as a perfect Fantasy Heartbreaker. However, I am positive that Goodman will be releasing a fair ton of modules for it, so it will be supported, unlike many other heartbreakers.”

Troll and Flame: “The DCC RPG is aimed more or less exactly at me. That is, at gamers who like a particular type of RPG (they may not know they like it yet and it’s probably not the only type they enjoy). DCC RPG is not universal. It has style, it oozes atmosphere, it is opinionated.”

The Thistledown Post: “So where I am now is a long way from where I started regarding the DCC RPG. Now, I am more excited about starting this campaign than I have been for any other in a long span of time.”

On First: “When I first started reading about the game, I thought that it was so random as to take away all choice from the players. What I’ve learned as I’ve played is that it actually encourages player control.”

Being Giant: “The DCC RPG arrived this week. I fell instantly in love.”

Year of the Dungeon: “Goodman took a very old-school point of view and made a game that manages to offer a fresh perspective on many aspects of the game while loving maintaining all the core tenets of old school play. More importantly, the game doesn’t just provide rules, but it’s a primer on how to get the most out of its chosen style of play.” 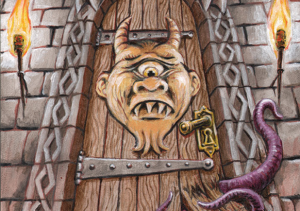 Raven Crowking’s Nest: “Having read the Dungeon Crawl Classics core rulebook rather exhaustively now, I am coming to the conclusion that this will be my go-to game for all time.”

Quickly, Quietly, Carefully: “Unlike a lot of gaming material I buy only to read, I would actually like to play DCC at some point.”

Skyland Games: “DCC RPG successfully combines old and new RPG mechanics into an awesome new system. Inspired by previous versions of D&D and more specifically, Appendix-N from the AD&D Dungeon Master’s Guide, Goodman Games has done a masterful job of taking inspiration from the old, while blazing new ground. Are you listening, WotC?”

Swords of Minaria: “Is DCC really that good? For the casual gamer, it is a wealth of inspiration and ideas that will not disappoint. For those that learn to play it on its own terms, and to let the inspirational fantasy literature and music of that era take the imagination away, the Dungeon Crawl Classics Roleplaying Game is nothing less than the game of the OSR thus far.”

Neradia: “This is the game I’ve been wanting ever since 2nd Edition AD&D started repackaging itself with crappy covers.”

Out for Blood: “In a nutshell, the introductory adventure is excellent and the DCC rules make it easy to dive right in. I’m itching to run DCC again so that’s a preliminary 4 out of 4 stars from me.”

Grognardia: “Seriously, this is a very well written and presented game that knows what it’s about and gives it to you. It won’t be to everyone’s tastes and I consider that a good thing. We already have enough lowest common denominator mass market entertainment as it is and Goodman Games should take considerable pride in not having given us more of the same.”

Greyhawk Grognard: “My overall impression is that this is going to be one raucous game to play.”

RPG.net: “DCC RPG is a flavorful game that aims to bring the oldschool movement to another level of production quality and genre-flavored design. It succeeds.”

19th Level: “Overall, I like what I see a lot. I greatly admire its boldness. You really can’t call it a retro-clone, it is its own game which takes D&D as its starting point. And that may not even be fully accurate.”

Nerd Trek: “The artwork is B&W and all invokes the era of the 70’s when it comes to the style of art that was popular during that time period, I swear a few of these pieces would have worked as side murals for vans back in the day, right down to the shirtless muscled warrior with sideburns saving the day.”

EN World: “Make no mistake, DCC RPG is not for everyone and it does not try to be. Randomization, heavy use of tables, critical fumbles, and no multi-classing are strong departures from what many new gamers have become accustomed to.”

Unto The Breach: “From what I’ve read so far of DCC RPG (granted, I am not anywhere near reading the entire thing just yet), it might just become my preferred version of D&D, basic or advanced or otherwise.”