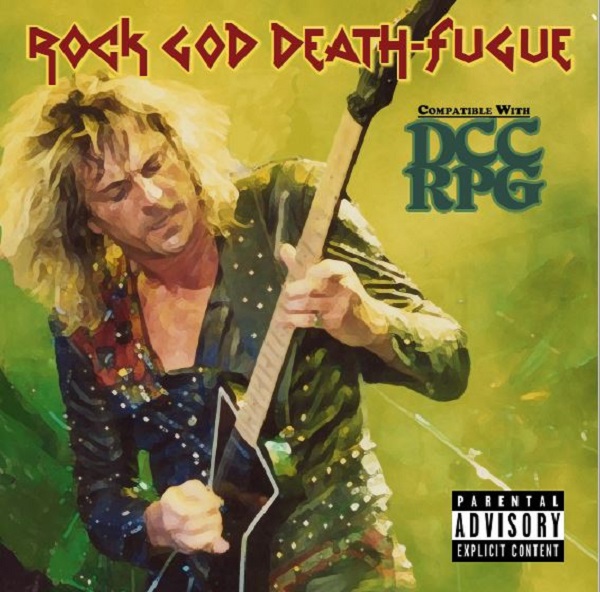 ROCK GOD DEATH-FUGUE is a one-shot adventure that uses the DCC RPG rules to turn players into a rock band on the German leg of its 1st world tour!

The PCs are “Rock Gods,” weaving musical “magic” and indulging in all the x dangerous habits and debaucheries of the rock ‘n’ roll lifestyle. To make matters worse, the PCs all show up listening to Writhe Through Shadow — the posthumously released album by the band Atramentous – believed by many to be cursed. It’s certain that the PCs are headed for a bad end, the only question is whether they go out in a blaze of glory or as sad self-parodies like Axl, Elvis or the Ozzy of the “The Osbournes” era. The adventure alternates between encounters on the road that threaten to derail the tour — or worse — and the band’s shows. In concert, egos, insecurities & aspirations to true artistry take over, creating player-versus-player musical duels. The outcome of these duels determine how history remembers each Rock God!

ROCK GOD DEATH-FUGUE is a DCC RPG-compatible, “modern-mythic,” one shot adventure module. It is available as a 36-page softbound booklet or PDF. The product contains a 10-encounter adventure, modified spell duel rules for running in-concert player-versus-player musical duels, a worksheet and tracking sheet for managing the duels and character sheets for RGD-F’s custom character class – 3rd level “wizards” called “Rock Gods” with two spells adapted to RGD-F. The design, writing and art direction for ROCK GOD DEATH-FUGUE was done by regular Goodman Games writer Steve Bean. The image-rich interior of RGD-F “breaks the fourth wall” – it’s made to look like a set of liner notes for the fictional alt-rock album “Writhe Through Shadow,” that the PC Rock Gods all coincidentally show up to the tour with as an influence on their writing for their next studio album. 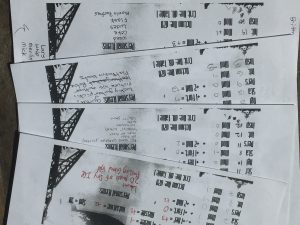 ROCK GOD DEATH-FUGUE character sheets illustrate some of the differences in equipment between it and regular DCC RPG.

Steve calls ROCK GOD DEATH-FUGUE as “a lesson in how commercial creative works take on a life of their own beyond the control of the creator.” RGD-F was originally intended as his next work in a “DCC existentialism” series that started with NULL SINGULARITY, Steve’s work inspired by James MacGeorge’s BLACK SUN DEATHCRAWL. Where NULL was a “long, dark night of the soul in space,” Steve originally envision RGD-F as a “long, dark night of the soul on stage,” intended to explore, thematic questions like: ‘What is art?’, ‘At what point will we sell our souls to achieve real art?’ and ‘What causes artists to ‘sell out?’ But that’s NOT where RGD-F wound up. Try as he might to repeat the tone and experience of BSDC and NULL, playtesters kept turning ROCK GOD DEATH-FUGUE into an NC-17 version of “This is Spinal Tap” and “Metalocalypse.” But they were having an absolute BLAST, so Steve figured (a la The Kinks): “give the people what they want” and went with it! (What a @#$%&ing sellout, eh?) 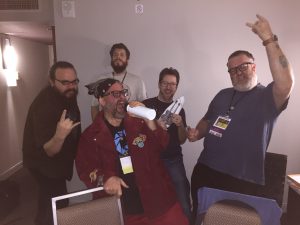 In game play, RGD-F does retain one crucial “dark” feature. The PCs are destined to come to bad end; the rock ‘n’ roll lifestyle will catch up to them eventually. The thing the players get to try to control is how history remembers their Rock God – as a legend who went out in a blaze of glory or as a sad parody who faded away. There was a “blaze of glory” of a sort in the first product play test. Two members of the band “Ünfettered Science” had been waging an ongoing competition all session long for the affection of a beautiful female groupie. One bandmate had charmed her on to the stage in their first show and then spirited her on to the tour bus. But then she was charmed out from under him by a back-stabbing bandmate. To make matters worse, the back-stabber was later victorious in a musical duel between the two of them and stole the limelight at their most recent concert. The rivalry came to a head at that concert’s after-party in an all-night diner. The spurned band mate confronted his rival once again. Unable to sway the groupie’s affections, one-up his rival musically or outwit him, the spurned Rock God “cast a spell,” calling on the Dark Muse to provide. Out of the pocket of his leather jacket he pulled a military-issue hand grenade he’d apparently secreted there. He pulled the pin and tossed the grenade… but the spurned PC still couldn’t seem to escape what appeared to be his destiny as a pathetic loser! He fumbled the attack roll and the thrown grenade bounced off a booth, boomeranging back to land at his feet. He blew himself and two other bandmates, but not his rival, who survived to have the coveted groupie still fawn over him! 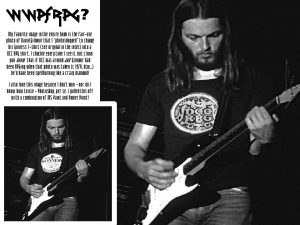 An inside look at the development of the art for ROCK STAR DEATH-FUGUE from fair-use images.

The coda to all this? All of us dream of being a rock star and a bad boy; ROCK GOD DEATH-FUGUE let’s you RPG your rock ‘n’ roll fantasy – the DCC way! You KNOW you want to! High Ceeeeeeeeeeeee!!!

NOTE: Don’t forget that you can get an official ROCK GOD guitar pick FREE with the purchase of this or any other Third Party Publisher product from our online store! Offer good while supplies last.