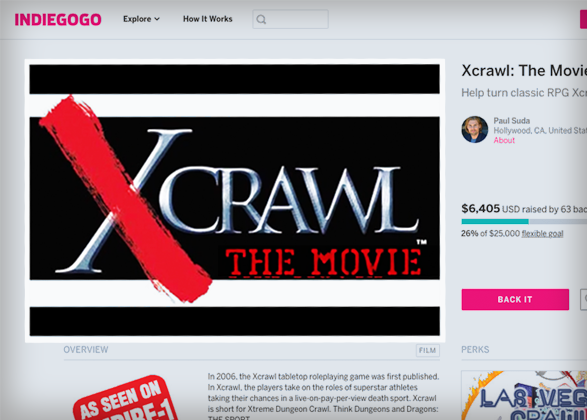 One of our favorite people, Brendan LaSalle, has teamed with Hollywood writer/producer Paul Suda in an attempt to create something special…and they need our help.

Xcrawl creator Brendan LaSalle has co-written a script with “Tower of Joy” producer Paul Suda, and teamed up with director Seamus George and production coordinator Morgan Walker to bring Xcrawl to the big screen!

Xcrawl: The Movie is currently live on Indiegogo, with the goal of eventually producing a Pitch-Vis. What is that? A Pitch-Vis creates pre-visualization techniques that every big movie uses to illustrate the look, rhythm, and blocking of a big complex action sequence so that a film’s crew is crystal clear on the product they are making, BUT INSTEAD of mocking up a sequence for a movie that is already in production, a pitch-vis is used to sell the movie concept (and its attached script) to studio executives and financiers in the first place. Or, in other words, they want to make a small movie in the hopes of making a BIG movie. One that captures the unique tone and feel of Xcrawl.

And the only way they can do it is if you help out. This is NOT a Goodman Games project, and is being produced under license from the original creators of the game. Still, we are fans of Xcrawl and Brendan, so we’re totally behind the campaign!

So, head on over to Indiegogo and give Xcrawl: The Movie a look, and maybe even some love. And fame. And do it for the glory of the games!