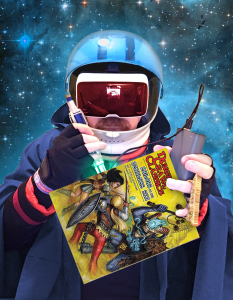 During his stopover on our planet, Space Wizard helped us answer an important question: What’s in the DCC reprints?

Many DCC modules have been through multiple printings. We often have customers ask what’s different. For every new printing, we do a fresh proofreading. This often catches minor typographical errors. In addition, we give the authors a chance to review their work. They occasionally choose to revise or even re-work sections of the adventure to make it more clear. On top of that, we usually review the artwork. If there is art we’ve changed our mind on, we swap it out for a new image, and occasionally adjust placement. And finally, we often expand an adventure with related supplemental content in an appendix, or even an entirely new “backup adventure” in the back.

It’s impossible to articulate all the changes in each new printing (in part because we didn’t keep perfect records ourselves), but Space Wizard scanned each reprint with his sorcerous technology to discover which ones are different. Here are the major changes for reprint editions of recently reprinted adventures. Adventures not noted here may have been reprinted but without any substantive changes.

DCC #68: People of the Pit: New mini-level, Assassins of the Pit