Three new sets of DCC RPG dice made their debut at Gen Con 2016, and they are now wending their way between worlds to this one. Place your name upon the Scroll of Preorder, and the stones of your choice will arrive at your domicile at the moment destiny has foretold. The dice come in three varieties, each with their own curious qualities: 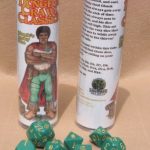 These are the very dice used by Chuck Plimpton in his tavern games. He is reputed to be quite lucky, and if you doubt that, you should know that Chuck made it back from the land of the dead! He had a set of these dice on his person at the time, and while the dice probably had nothing to do with it, can you afford to take that chance? 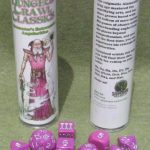 These dice were created by Alamanter the Violet during his studies in the city of Ciz. Each die draws upon the power of extra-dimensional space to randomly determine numbers. It is said that under the right conditions they can roll numbers that don’t even exist! 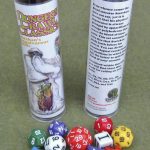 These are the most dangerous dice ever created. The evil Sezrekan trapped in each the soul of a creature from the depths of the infernal realms, and these creatures crave blood! Whether it be your blood or the blood of your enemies, they care not! Beware fumbling with these dice!

The last time we offered dice, they sold out very quickly. Be sure to get yours today!