A Level 6 Adventure for DCC RPG

Hail, wizard of Aereth! Forget everything you think you know about the magic. Mastery of the occult lies beyond the comprehension of your world’s primitive societies and warring kingdoms. Your cantrips and legerdemain are mere parlor tricks in the face of true power. The Star Cabal, peerless practitioners of the arcane arts, extends a rare invitation to join their ranks. Hurtling through the cosmos in a marvelous flying city, the magicians are revered as lords of creation by the spacefaring races of a thousand suns. Ascend to the stars and seize your rightful seat in the vaunted halls of power… if you dare.

Your adventurers must pick a path through twisted ruins, ancient missile silos, strange monorail systems, and a conflict with four deadly factions to save a world—or destroy it!

Check out the full wraparound cover art for DCC #88: The 998th Conclave of Wizards! 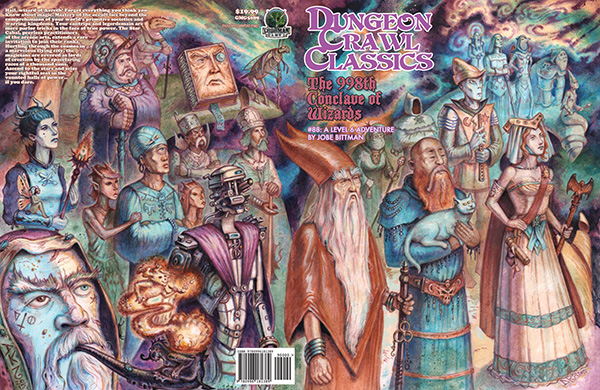 Check out a preview of DCC #88: The 998th Conclave of Wizards