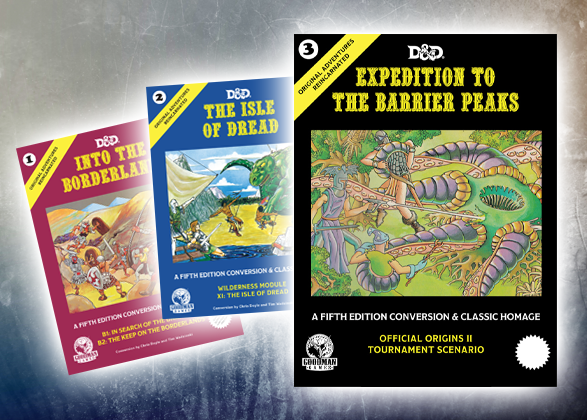 Gary Con is over and it was a great con – it was great to see everyone and see the community running all those great games! And it was equally great showing off a lot of news and upcoming product to all the Goodman fans out there.

At our “What’s New With Goodman Games” seminar we announced several new projects, and over the next several days we will posting details on the projects that were announced. Today, we start with a question that everyone was asking about: what’s next for Original Adventures Reincarnated? 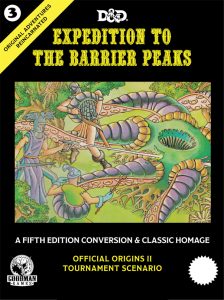 We’re very exited to announce the next release in our Original Adventures Reincarnated line: Expedition to the Barrier Peaks! As with previous releases in the OAR series, this one will include scans of the original 1E editions, a conversion to 5E, and new 5E material filling in some gaps from the original 1E module.

OAR3: Expedition to the Barrier Peaks is slated for a September release. It will be solicited to distributors soon and will be available for pre-order once the book is at the printer.

Originally run was a tournament adventure at Origins II, the adventure was published by TSR in 1980. Expedition to the Barrier Peaks is a famous adventure module, because it mixes “science fiction” and “fantasy.” For this reason it is both well known, and an enduring favorite for those who played it during its heyday. The 5E conversion is consistent with the original design principles, and also offers new avenues for exploration.

In the adventure, characters come across a spaceship that has crash landed into your fantasy world, and have to deal with the consequences. Which include robots, plant people, and a zoo of alien creatures. And ray guns. It has ray guns.

The OAR volume will also include complete scans of the original 1E publication. This includes both the adventure booklet as well as the extensive book of handouts that was part of the original publication. Dedicated fans may already know that the handout art changed between printings. Three handout illustrations were changed between the first (1980) and second (1981) printings of Expedition to the Barrier Peaks, and most of the remaining handouts were renumbered. The OAR volume will include scans of both versions of the handout booklets. For those of you who have an old ragged copy of Expedition to the Barrier Peaks in your personal collection, you will be able to discover which set of handouts you never had the chance to see before!