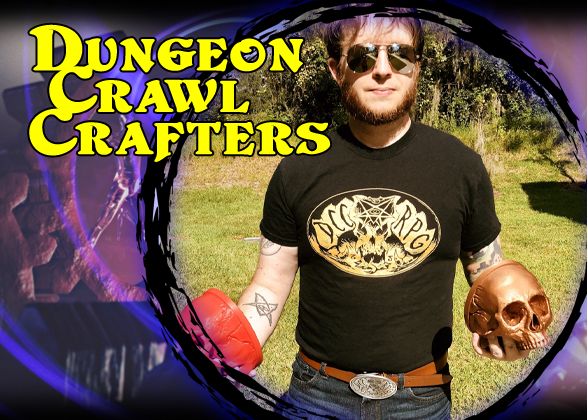 One of the most amazing things about our fans is their creativity. Their ability to take concepts and bring them to life in exciting ways. That’s why we’re proud to introduce a new feature to the site: Dungeon Crawl Crafters. It’s a way for us to showcase fans and the incredible creations they put out in celebration of Dungeon Crawl Classics and all things Goodman.

We’ve got a great first entry to present. A man who sculpts and prints his own trophies for tournaments and games. Let’s meet David Wilt!

Tell everyone a little bit about yourself: who you are, where you are, what you are about.

My name is David Wilt and I’m from central Florida. I’m a web developer, a father of two awesome boys, Rune and Rowan, and a tabletop RPG fanatic.

How did you first get into the Hobby? Did model making or Fantasy RPGs come first? 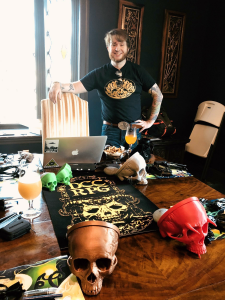 Fantasy RPGs definitely came first. I vividly remember my first encounter with RPGs in the 90s as a freshman in highschool when I stumbled across a group of seniors playing Rifts. I was interested in what they were doing and they “took me under their wings” as it were and ignited a lifelong obsession.

Model making for me didn’t really start until a few years ago. I took a lot of CAD classes in high school and college, but it never really stuck. When drone/quadcopter racing really took off I got heavily into custom building my own racing copters. I have an irrational fear of band saws so shaping wood or metal was out of the question. And 3D printers just so happened to be taking off at the same time, so I bought my first and haven’t stopped making things since.

Tell us about the modeling you have done to go with your Dungeon Crawl Classics events.

For my DCC tournament I wanted to make sure everyone got something so I created a bunch of different little tokens to start. The designs began as olympic-styled medallions with phrases like “I died!” or “I survived!” or event specific things for the encounter I was building at the time. Eventually I realized while the medallions were neat, they just weren’t metal enough for the epic-ness that is DCC. And really what is more metal than a skull?

We love the pics from your Nebin Pendlebrook’s Pantry game, and we can’t get over the trophies. How did the event go?

The event was an absolute blast! We had 20 villagers enter, 2 leave, with only 1 of those surviving (delayed magic missile misfires for the win!). We utilized the scratch off character sheets with the alternate character creation reveal rules, which was a huge hit. Our first encounter had one of our hapless town citizens wrapped up in a web by dangling spiders who whisked them up to the ceiling above. For whatever reason we had a very large number of elvish attorneys adventuring with us, so quills were our main form of weaponry. The very first attack of the game had one of our players lobbing a quill at the villager-snatching spider. Of course the attack missed the spider, but squarely hit the villager it had snatched up. We scratched off their hit points only to reveal them having a whopping 1 HP. Accidental homicide on turn one. Later in that same encounter we had another villager decide to kick a stone at a spider, fumble, and kill themselves with a falling stalactite after the flying rock dislodged it from the heights above. We lost another 5 villagers to the slippery floor in the next room. It was beautiful. Kudos to Mark Bishop for writing such a fun adventure!

What are your biggest challenges as a model maker? 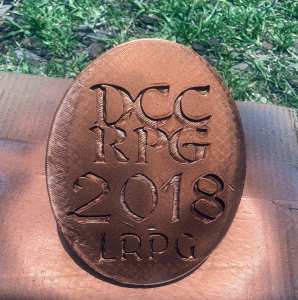 There are so many fun challenges with modeling for 3D printing. The vision you have for a prop almost never translates to the slicing nature of 3D printing, but that is part of the fun. Dealing with overhangs and properly handling support structures is a constant challenge, and when prints for large items regularly take 20+ hours to complete, it can be incredibly nerve wracking. You have to take minor things like the drafts caused by opening the door to your workshop room into account or risk cooling a layer of plastic too early. It sounds daunting, and it is at times, but the only hobby I enjoy more than creating props is the one that I use said props in.

It’s an amazing feeling to watch something you’ve drafted in Blender slowly get built layer by layer in real life. With free tools like Tinkercad and other simple drag and drop modeling applications entering the market every month, the hobby is becoming more accessible. And 3D printers are dropping in price and increasing in reliability every day. After initial costs and filament, it is incredibly inexpensive to produce quality props with a 3D printer. The large skulls that I handed out for 1st, 2nd and 3rd place cost me about $8 in filament per piece.

What advice would you have for people inspired by your work?

Get out there and make stuff for your players! You don’t have to have a 3D printer or any kind of fancy equipment. Spend an evening with your crew doing papier-mâché masks of the monsters you encountered in your last session, or put together some hand-written thank you notes from the perspective of the villagers they saved a week ago. It may not seem like much but people appreciate a personalized touch! To me, the biggest honor you can have as a Judge is someone keeping a memento from your games to tell their friends about. It helps spread the word about this wonderful hobby and gives people something to reminisce on.

What is your favorite thing about Dungeon Crawl Classics RPG? 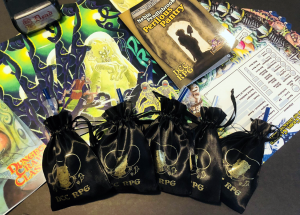 The hidden secrets in the rulebook! I was lucky enough to be one of the people who found the first hidden message in the current edition of DCC RPG and got a piece of original art from Stefan Poag (the “Luck” photo from page 19 of the book). It inspired me to add a bunch of hidden messages to a few campaigns and one-shots I’ve ran since then (including a cleverly hidden clue that lead to winning some cool gifts in a Paranoia one-shot I ran). Admittedly when I first got my hands on Mutant Crawl Classics I spent a few hours pouring over it looking for a hidden message before actually delving into the rules proper. I didn’t find anything but I’m not convinced there’s not something there… Hoping we get more of these in future editions!

Are these trophies available anywhere for others to print out for their own tournaments?

Absolutely! If you’d like to print these trophies out yourself, they’re available for free on Thingiverse:

If people want to see more of your work or follow along, where can they find you?

We also have a podcast on LibSyn, Apple, and Stitcher. You can find info for that on our website. 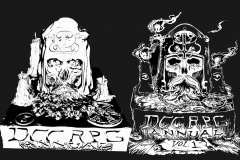 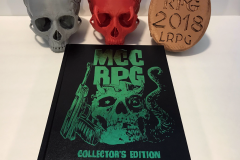 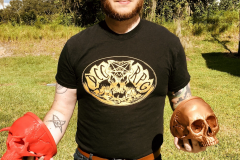 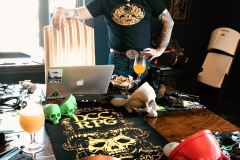 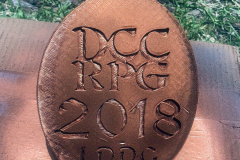 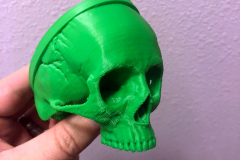 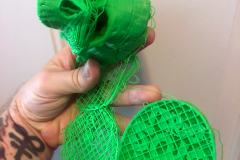 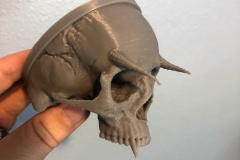 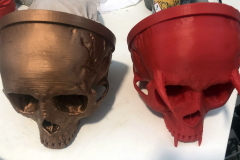 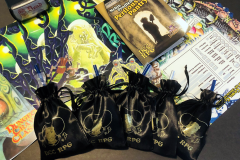 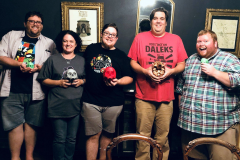