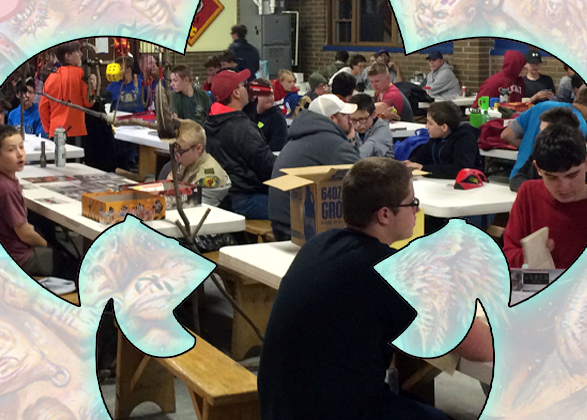 What do you get when you mix tabletop gaming, camping, and Boy Scouts? ScoutCon, of course! 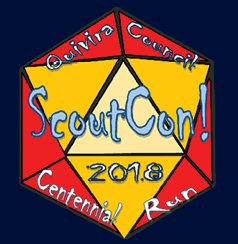 ScoutCon is a convention that is only open to the BSA Venturing Crews and Boy Scouts of America members, and our very own “Taco” Jon Hershberger is a volunteer and event committee member who attends every year and helps foster the creative mind and add some fun at the show by engaging attendees with sessions of Dungeon Crawl Classics!

Two-hundred Scouts and Venturing Crew members, along with their leaders and a host volunteers, turned out for a weekend of tabletop gaming and Scouting fellowship over the first weekend in November. ScoutCon 2018, Quivira Council’s second year gaming convention, was held at the Council’s Camp Kanza, near Abbyville, Kansas.

ScoutCon 2018 featured a Magic the Gathering tournament, classic boardgame tournaments, Dominion and Settlers of Catan tournaments, three Dungeon Crawl Classics RPG sessions, and a fully-loaded games library for open gaming. Judge Jon “tacojohn” Hershberger led the 3 DCC events on Friday and Saturday, drawing more than 30 players for sessions of Doom of the Savage Kings and Sailors on the Starless Sea. 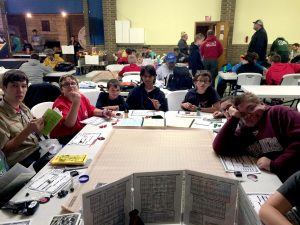 Friday’s running of Doom of the Savage Kings was a demo event, geared toward Scouts that were new to role-playing games generally and those gamer-Scouts new to DCC. Jon drew 12 players for Doom. Much chaos ensued and many shenanigans were undertaken as the diverse party of 1st level characters met Morgan Haverson, the Jarl of Hirot, and his phalanx of armored guardsmen on the road. After much discussion and successfully bluffing the Jarl as to their intentions, the party ambushed one of the guardsmen and freed Morgan Haverson from the standing stones on the outskirts of Hirot. The party plotted and schemed to lay an ambush for the Hound of Hirot, but the Hound was the wiser, instead leading the party into the forest and to the very edge of the Sunken Fens.

Stymied by the Fens and the loss of the Hound’s trail, the party called a halt its march and summoned several familiars to assist their search. Unbeknownst to the rest of the party, the party’s lone Halfling slipped away, into the Fens, to follow the brackish waterway to set a trap for the unwitting Hound. However, the Fens were an unwelcome host for the hapless Halfling as the oozing earth belched forth a cloud of noxious, stinking gas that enveloped the Halfling. Realizing his cause was in jeopardy, the Halfling tried to avoid the noxious cloud and return to his companions forthwith. But his Stamina, a measly 5, would be his Achilles Heel as he failed two successive saving throws and slumped into the muck, the Fens reclaiming the Halfling as tribute for the party’s bold intrusion. Were it not for the observant eye and quick action of one of the Halfling’s companions, the Halfling might have been lost to the Fens for good. As it was, he was rescued and taken to Hirot to be revived by Father Beacom.

Progress was slow for the Friday event as there were a lot of details to be followed up on by the party. Time ran out as the party was gathering information from and seeking alliances with the residents of Hirot. 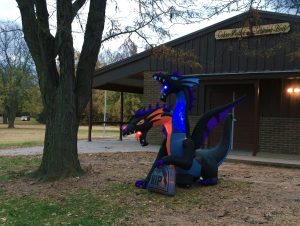 ScoutCon’s patron, one of Tiamat’s Daughters

Saturday’s two DCC events were used together to make an extended run at the venerable Sailors on the Starless Sea. The party of 10 adventurers were a little better organized on Saturday, and they were more focused on making progress than Friday’s group, and so they were successful in that regard. The party spent a lot of time and energy fighting the animated vine-corpses and slimy seed-pods at the entrance to the Chaos Keep. But perseverance won the day and the creepy vine-corpses were eventually dispatched. The front wall of the Keep was scaled and the party put the guarding beastmen to the sword. Deigning to explore the inner courtyard of the Keep, the party was drawn to the mysterious well. One brave soul decided to use his live chicken, tied to a rope, to test the safety of the well. At the same time, one of the party’s clerics and one of the party’s thieves decided to inspect the well for themselves.

With grappling hooks and ropes, they quickly jumped into and lowered themselves down into the Well of Souls before their companions could talk them out of their rash decisions. Unexpectedly, to the party at least, the chicken and the two rash characters were sucked into the void and disintegrated instantly. Alas, the party counted themselves the poorer for the loss of their companions…..and the chicken.

Realizing that their recently-purchased war horses wouldn’t be able to join them in the ensuing and anticipated dungeon delve, four of the party’s members opted to return to Hirot to stable their war horses before rejoining the adventuring party at the Keep. Rallying the remaining reavers, they stormed the Keep’s lone tower, taking down the tower’s beastmen guardsmen and their beastmen Champion. As the second Sailor’s session came to a close, there was much debate about where adventure would lead the party next.

In the waning hours of the convention, the Prize Vault was opened and those winners of the tournaments, the costume contest, and the Dutch Oven cook-off, were invited to choose from the many gaming-related prizes. Most popular among the many prizes were socks. Seriously.

Open gaming continued Saturday night, after the costume contest and the awards & prizes were selected, with the final call to close the event hall down around midnight Saturday.

A big thanks to all the organizers and attendees to ScoutCon 2018! 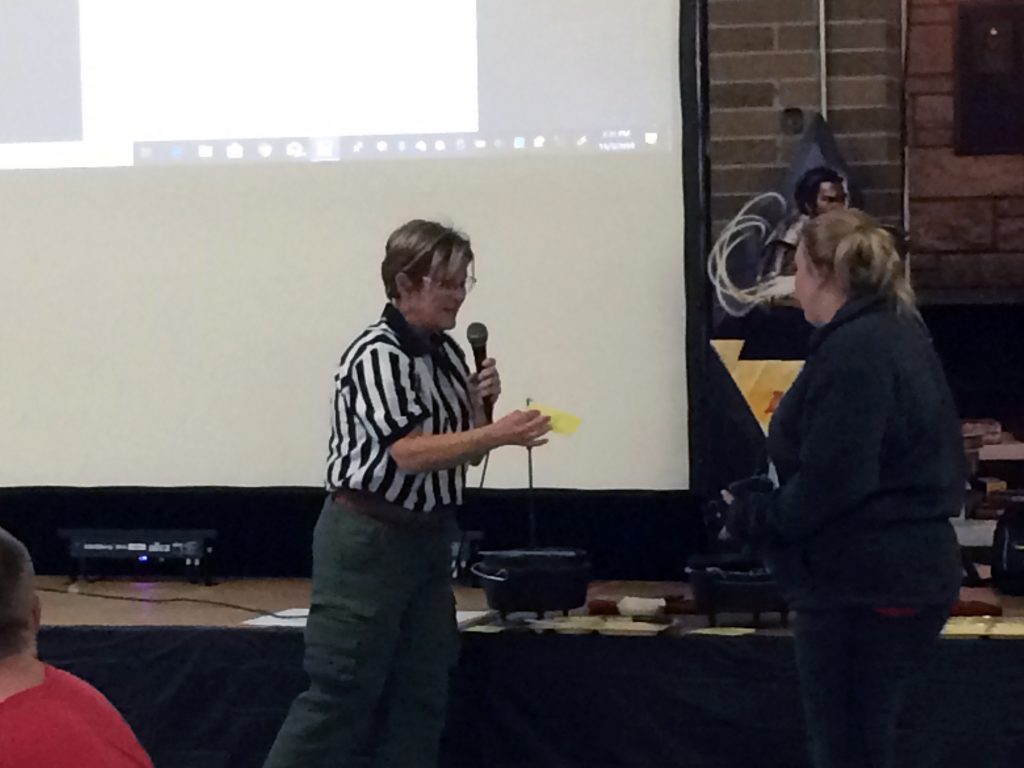