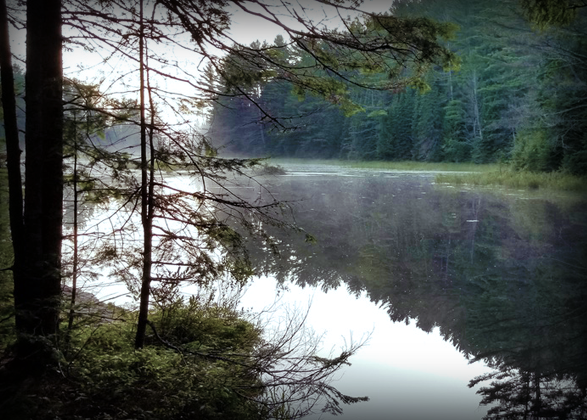 Canada is the second-largest country in the world, with only Russia being larger. Even so, most of Canada’s population hugs the American border, and that which does not is largely found along the coasts. Algonquin Provincial Park is located where the Province of Ontario begins to get a little less heavily populated. At approximately 3,000 square miles, the park is as third again as large as Delaware, and about 1/10th the size of Indiana or Scotland. Travelling along the Highway 60 corridor at Algonquin Park’s southern end allows one to see black bear, moose, and even wolves, if one is lucky, but the interior of the park is a land belonging to the serious hiker and canoeist.

Small island on the southern end of Lake Opeongo.

I am over 50 years old now. My days of serious hiking and canoeing are somewhat behind me. Still, even camping along the Highway 60 corridor, this still feels like the country Hiero Desteen traverses in Sterling Lanier’s Hiero’s Journey. One can still gain a sense of the pre-modern Canada that inspired Algernon Blackwood.

That red thing on the right is my canoe, where I failed my Luck check.

Modern living inures one to the weather. As a result, many judges may fail to describe it, or its effects, adequately. We camped for a week near the end of August, and it rained. A lot. Torrentially at times. Hiking, canoeing, or adventuring in such a downpour would be fraught with peril. A few years back, I was on the Centennial Ridges trail during a much lighter rain, and the rocky portions of the path became so slick that I wasn’t certain I would get down safely. It is much harder to light a fire in the rain, even with modern tools—unless you rely on some form of fuel like kerosene. Even with modern conveniences, it is easy to be cold, wet, and miserable.

Tall pines on our small island.

In a canoe, wind can be problematic if it is strong—not because it will tip you, but because it is difficult to prevent the wind-blown water from driving you where it will. We had to fight our way out of a shallow area filled with barely-submerged deadfall at one point when caught by sudden gusts. I was lucky my DCC cap wasn’t blown into Lake Opeongo. My daughter was less lucky.

One of many high cliffs in the park, with the sky threatening more rain.

We landed on a small island to explore. Disembarking the canoe, I failed my Luck check, resulting in a soaked foot and a paddle which needed recovering. The DCC Core Rulebook suggests requiring periodic Luck checks for no specific reason, and I concur. The judge can provide index cards with the PCs’ names, and then divide them into a “passed” and “failed” pile, drawing from each as required until the next check is called for. Details like this, which may or may not have mechanical significance in the game, do a great deal for immersion. A short time later, I managed to find three wintergreen berries, giving my youngest child and my partner their first taste of what had been a childhood treat for me. I encourage judges to include little windfalls and aggravations to occur in their games.

At the beginning of August, I was suffering from what had been a long period of fairly consistent writer’s block. Getting on the water, under the trees, and up to spectacular views did an amazing job of restoring my creativity. Sometimes getting out there and doing something is the only way to have something to bring back to the table.