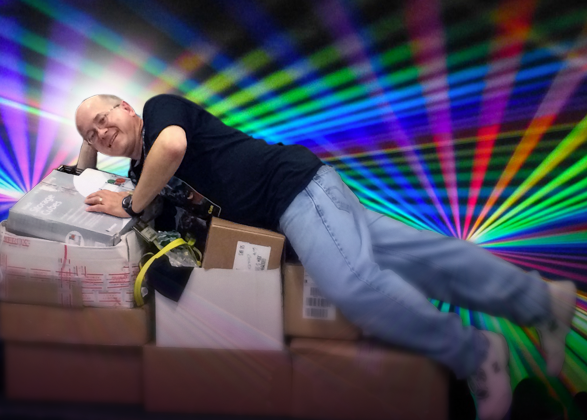 It’s a little known secret: when the last customer leaves Gen Con, they turn off the air conditioning. And then they open the big outside doors. In August. But the few, the proud, the sweaty stay behind to help disassemble the greatest days in gaming, because somebody has to pack up everything before we go home. And thus today we give you another behind-the-scenes look at life in the gaming industry. Today we show you the teardown squad: the brave souls willing to sweat their way through an Indianapolis summer to pack up the leftover books and boxes when Gen Con ends!

We’re not kidding about the air conditioning, either. Gen Con is willing to foot that bill only for the paying customers. Exhibitors have to set up with no AC, and tear down with no AC. The moment the exhibit hall closes at 4:00, the action begins. It’s a race to tear down as fast as possible, to get out in time for dinner (if you’re lucky), and catch the union shipping guys before they take their breaks.

The best part of teardown is at 4:00 sharp. When Gen Con officially ends, they turn down the lights, and the entire exhibit hall erupts in a spontaneous round of applause. It happens every year. The dealers celebrate the opening bell of Gen Con—and by goodness we also celebrate the end. It’s a long four days.

Then the teardown squad starts working. These are the volunteers who agree to stick around and help with the dirty, sweaty task of disassembling the booth. Every book that didn’t sell gets boxed up. All the table coverings, banner stands, backdrops, and other paraphernalia gets packed back in boxes. All those boxes we broke down and hid under the back tables come back out again, and we reassemble them to hold books. Then we have to palletize, shrink wrap, label, and so on.

We’d like to say there’s a lot of camaraderie and fun in being part of the teardown squad—and maybe there is. It’s a special group. There’s always a big dinner afterward, that’s for sure, because this job works up an appetite. As for the teardown process itself…we’re not sure…is that camaraderie or just a lot of sweat?

Here are some photos of the Teardown Squad from the last couple years. And yeah, it’s a wild bunch. We’ve been in Indy for a full week by this point and everybody’s a little punchy. (And can you believe the whole booth fit in the boxes on that palette?)

Oh, one more thing. This is the only time you’ll ever see Taco Jon laid out on a dolly showing off his legs! There’s a reason they call him “Hot Legs” Hershberger. 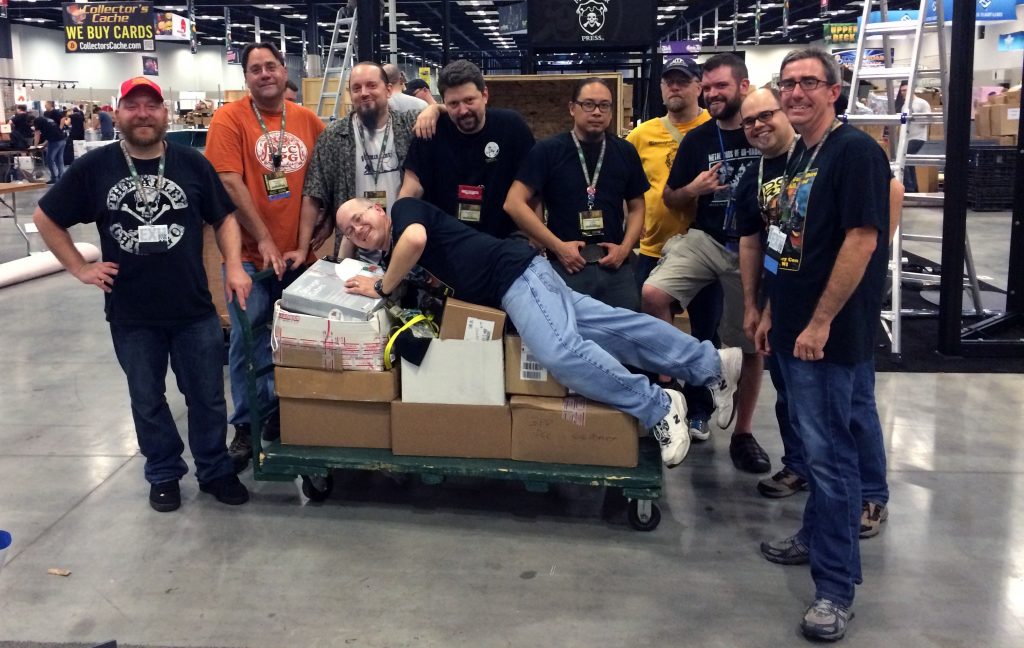 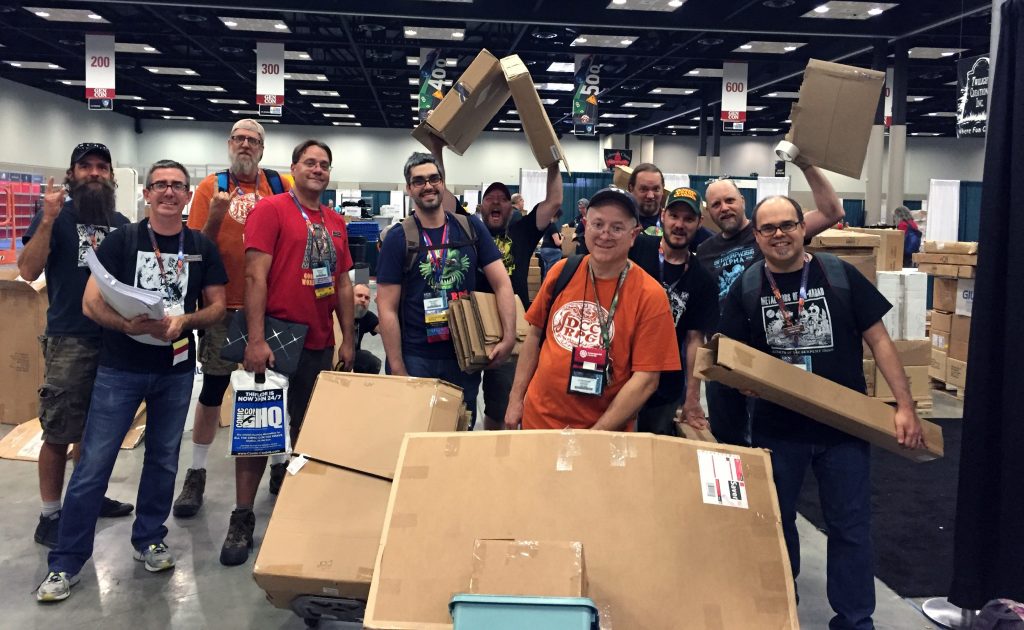 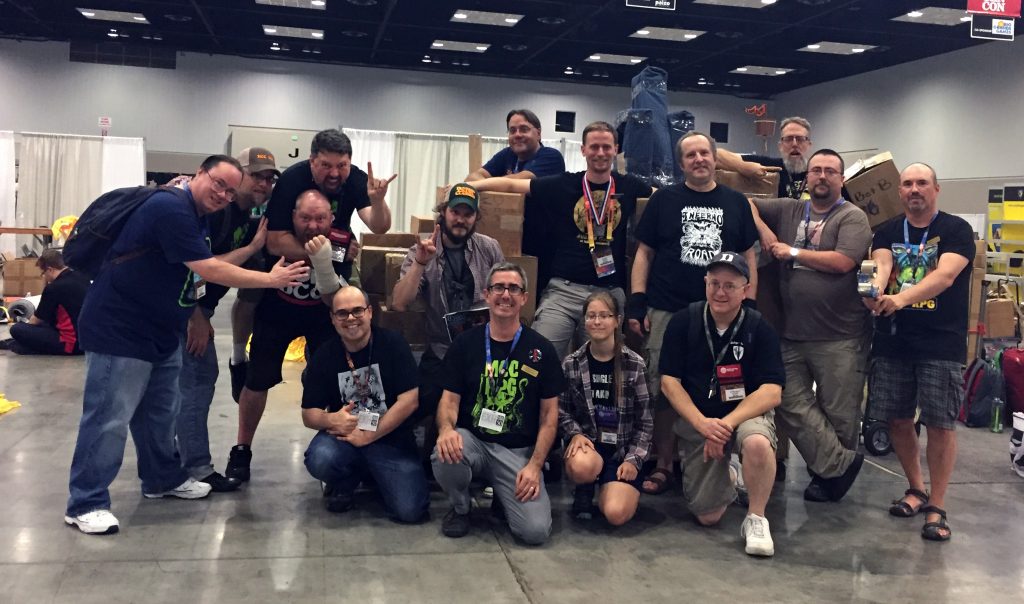 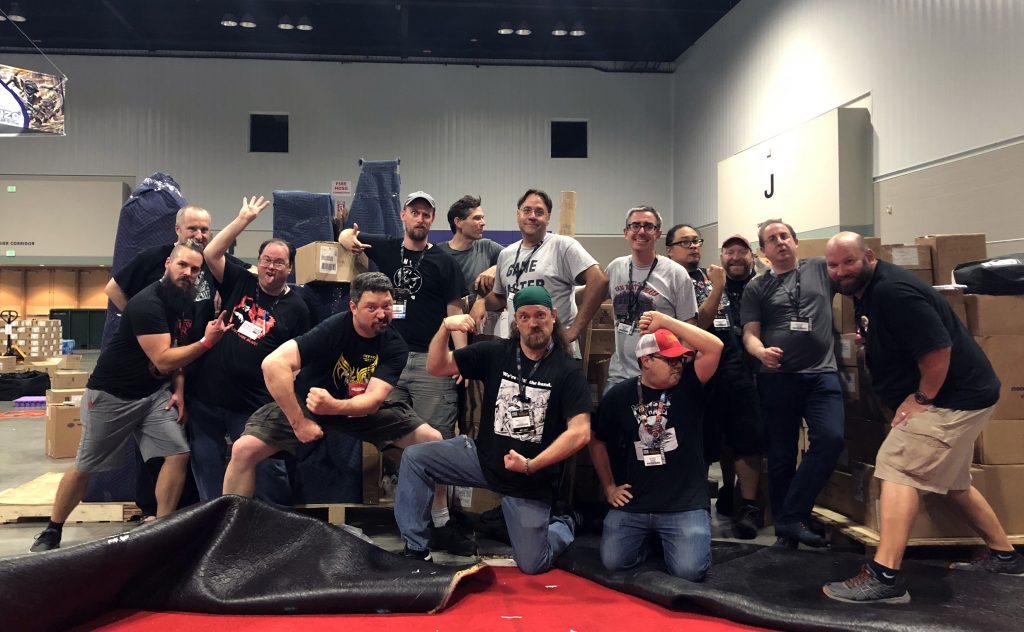