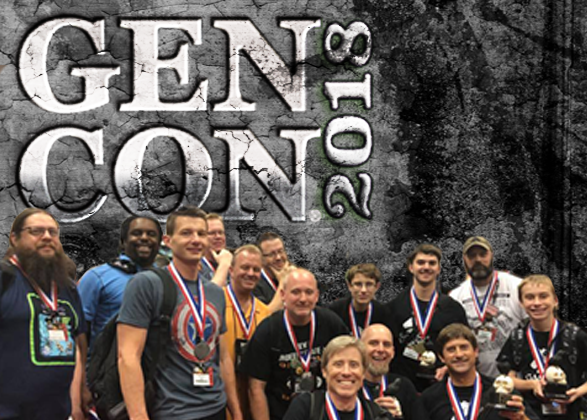 Riders on the Phlogiston: The 2018 DCC Tournament Recap

Last year’s DCC RPG open tournament amounted to a proof of concept. Could DCC be run in a tournament setting? Would it still feel like DCC? The answer was yes. Players and judges alike explored DCC RPG through a new lens.

Year Two brought an entirely different tenor. This year, players were out for blood. And, with no fewer than 14 TPKs over 24 sessions, the tournament did not disappoint. (Look for a follow up article with all the statistics from the tournament soon!)

While some of the tables were pick up groups, many came as organized teams (matching uniforms included). And of those teams, some had prepped DCC-specific tactics right out of the gate. Chief among these was the wizard that, aided by an eager halfling, max burned magic shield the moment his session began.

For those of us that haven’t memorized the spell tables, here is a recap of the max spell result:

The caster calls forth a globe of shimmering magical energies that protects him and his allies. The caster is automatically encased in this magical shield, as are all allies within a 10’ radius. The shimmering globes last until the next sunrise and follow the allies even if they leave the caster’s side. Each globe has five benefits: it provides a +8 bonus to AC; it blocks magic missiles automatically (see magic missile spell description); it reduces damage on all attacks against its target by 2 points; it blocks most attacks from mundane projectiles, reducing damage from any arrow, sling stone, bolt, dart, or other ranged weapon by 20 points per attack for the duration of the spell; and it provides a benefit in counterspelling equal to a +4 bonus to any subsequent spell check made as a counterspell.

+8 AC and damage reduction for the entire team. Not a shabby way to start the round.

(It is telling, however, that even this mighty boon was insufficient to carry the wizard’s team to the final round.) 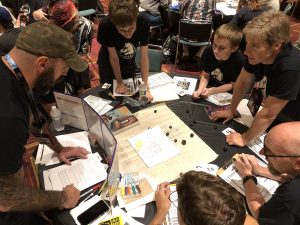 Round one of the tournament quickly proved the deadliest of the three. Set in a foreboding military complex somewhere in Terra A.D., the PCs were forced to contend with unknown technologies and experiments gone horribly awry. There were artifacts and treasures to be won by the brave — and carried into future tournament rounds — but woe to any unlucky soul that triggered a misfire.

Worse, an activated phlogistonic reaction was slowly consuming the entire complex. In order to survive the PCs had to keep moving, puzzling their way past deadly blast doors, weird machinery, and unknown foes, forever just one step ahead of the certain doom.

For players who already knew one another, or who were able to quickly come to consensus, the slow-moving phlogiston presented little threat. But those that hesitated or were caught by indecision quickly found themselves consumed by the creeping beryl storm.

Round two began with the PCs emerging from a wash of phlogiston at the bottom of a mine deep within the Shudder Mountains. Whereas the previous round called for courage and quick thinking, the second round offered puzzles certain to bewilder any player. Characters that hoped to brazenly cleave their way through every challenge quickly realized the errors of their ways.

By this time, advancing teams had hit their stride. While 19 PCs were reduced to zero hit points over the course of the round, only three PCs were slain and the round saw no TPKs. But the confounding puzzles did their villainy: not a single PC completed the dungeon.

In the final round, two last teams stood atop the mounds of the dead: The Lords of Sarcasm and Team Hammertoes. Neither had survived unscathed. For while a PC’s hit points reset after each round, the burned stats, lost spells and disapprovals did not. By the third round, PCs were but hollow shells of their former selves — bereft of Luck, reduced to nearly no spells or healing, and forced to rely on their cunning for survival.

Both teams were up to the challenge. With the sounding of the doom gong, the third and final round kicked off, ushering the PCs onto the weirdling Purple Planet. The third round combined the deadliest aspects of the previous rounds: a foe that dogged the PCs every step, complicated by mind-bending puzzles and deadly combat.

The Hammertoes suffered early setbacks, with two PCs quickly slain in the first encounter, and a third reduced to 0’ movement. One by one, they rose from the table to sound the doom gong, marching the team ever closer to the bitter end.

From all appearances it seemed that the Lords of Sarcasm, yet unbloodied, would carry the day.

But then disaster struck:

While battling beings called forth from the adventurers’ own fears, the Lord’s wizard lost control of a weirdling relic. Instantly the paty’s wizard and cleric were sucked through the singularity to their doom. The unconscious dwarf, who was just about to be healed by the cleric, bled out. With but one point of Luck remaining, the dwarf failed his recovery check and all three players progressed to the doom gong.

By now, only two Hammertoes remained, both younger members of the team. With the grognards slain, it fell to the new guard to carry the day. Pressing on through the darkness they found themselves confronted with a puzzle room, made all the more difficult thanks to deadly crystalline guardians. The elder of the twain lost his PC first, laying the full weight of Team Hammertoes on the shoulders of its youngest player. Alone in the darkness, and facing nigh impossible odds, young Jack’s PC soon followed his fellow reavers to the gong.

One of the penalties of death in the tournament is that all play at the table stops until the player has rung the gong. In the tightly constrained four hour sessions, every minute counts. It bears noting then, that every time a Hammertoe died, the Lords of Sarcasm would halt their play to stand and applaud the passing of a worthy foe.

Diminished yet determined, the Lords of Sarcasm pressed on, intent on clawing their way to victory. And when the final gong sounded on the Lord’s TPK, it seemed that the question had been settled.

Students of the DCC RPG Open will recall the massive point spread between last year’s first and second place teams. I was certain that, with the Lord’s long play, this year would be no different.

I couldn’t have been more mistaken.

While the Hammertoes had TPK’d earlier in the round, their young players had succeeded in pressing further into the dungeon. The Lords, through masterful play (and no shortage of humor), had survived longer, and gleaned more insights into the dungeon — though not making it quite as far into the gloom.

For emphasis: Each team had earned points in radically different ways. And yet, when the scores were tallied, the teams had tied. 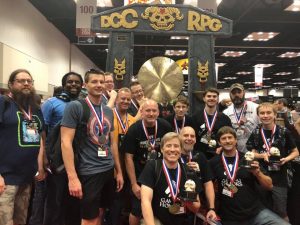 Judge Marc and I reviewed the scoring sheets a second and third time. The columns totaled. In a quintessentially DCC moment, a year of planning and 96 hours of gaming all came down to a single final dice roll.

Back at the booth, we summoned delegates from both teams. Young Jack the Warrior faced off against Ken the Dwarf. Surrounded by friends and fans, the final dice were cast.

The Hammertoes rolled a mere 8.

Designing a tournament is a nerve-wracking undertaking. (Though as one player quipped, “You should try it from our side!”) While each round is play-tested multiple times, there’s no substitute for the Gen Con setting. As designers and judges, we never truly know if an adventure will succeed or not until the starting doom gong is rung.

Each year we hone our craft, gleaning lessons on how to write better challenges, how to run better encounters, and how to improve the odds of the players having a good time … even if the game does end in a TPK.

This year was no different. Before round three had even begun Judge Marc, the Dark Master, and I already scheming of ways to make next year’s tournament open bigger and better. On the flight home, we began roughing out sketches of the rounds to send to the designers. And if all goes well, we’ll be soliciting encounters before the end of August.

Put another way, some of you might still have con crud and we’re already vying to make next year’s tournament amazing.

In the con setting, the tournament is magical. Players are invested to a degree that sometimes only comes after years of shared campaigning. Each fumble is momentous, each critical a triumph. Having the opportunity to design, and then run games for such dedicated players, is a gift to all of us judges.

… to our 2018 champions, the Hammertoes and Lords of Sarcasm, we salute you!

… to the expert judges that spent months prepping for the mind-bending rounds, we salute you!

… to all those players whose PCs fell before a wave of phlogiston, a 2-ton blast door, or a nanite infection, we salute you!

… and to all our players, their friends and fans, thank you for making this the best year yet! We hope you all return in 2019 to challenge, test, and thwart our judges once more!

See you at the doom gong!