Into the Borderlands FAQ 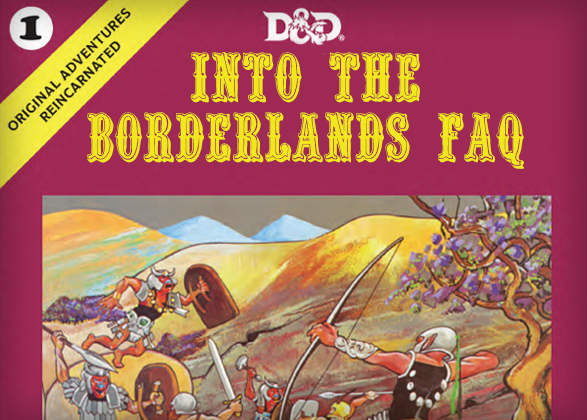 A few days ago we put out an update for Into the Borderlands, posting the current cover art along with a progress report. The response was amazing! You guys have made it clear that you are really and truly looking forward to our reprint/update to In Search of the Unknown and Keep on the Borderlands.

You also made it clear that you had a lot of questions. So, today, we’re taking a moment to answer many of them. In the interest of keeping all fans informed, here is a FAQ which addresses some of the most common questions we’ve received. We hope you find this helpful!

Into the Borderlands FAQ

Q: Why is it so long? Weren’t the original adventures only 16 pages each?

Yes, how did we go from two 16-pagers to 384 pages? Well, note that we have reprinted two printings of each 1E module. Additionally, there is a 5E conversion of the original modules. The 5E conversions of course take up quite a bit of space, because there are many rooms and creatures to stat up. The 5E stat blocks for new creatures and NPCs take a lot more room than 1E stat blocks. There is more art than in the original 1E editions. We have added two full chapters of additional (new) encounters which flesh out some of the original “undeveloped territory” in B1 and B2. We added 5E encounters to B1, which was originally an unstocked dungeon, and that increases the page count. We also included stocked examples of B1 dungeons for the 1E edition. The book includes introductory material by Luke Gygax and Mike Mearls, and an interview with original B1 author Mike Carr. There are three appendices of new magic items and spells, new monsters, and characters, hirelings, and followers. Finally, there is a full-color section showcasing the original covers.

Here’s a breakdown of the table of contents so you can see everything that’s inside. 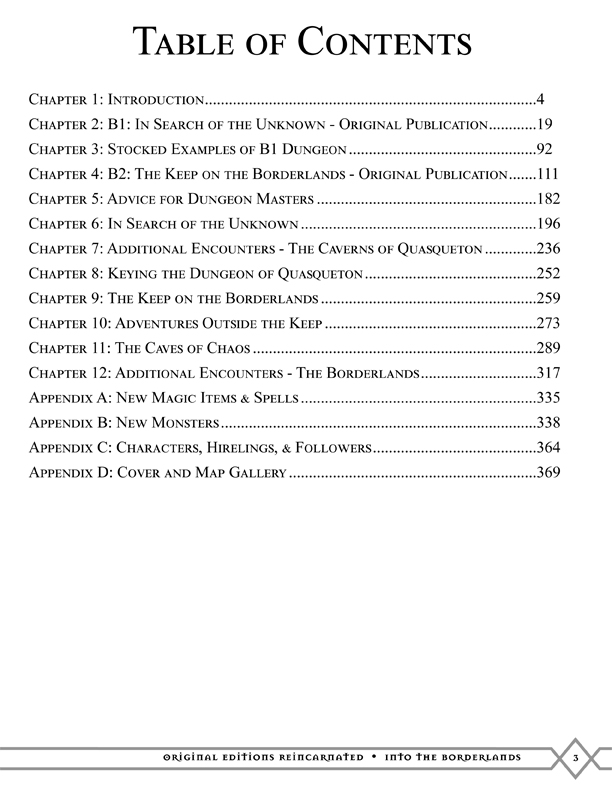 A: We don’t believe this is repeating the same thing, and these reprints are particularly interesting if you are a student of gaming history.

B2: The Keep on the Borderlands has the most dramatic differences between editions. Keep in mind we are only discussing the original 1E publications here, not the later updates and iterations. The earlier printings of B2 utilized a different stat block format, specifically including Dex scores for monsters, which were removed in later printings. In addition, the interior art was overhauled noticeably between editions. In a short, 16-page module, a total of 6 pieces of art were changed between the first and third printings. They actually changed gradually, with two images changing from first to second printing, and another four images changing from second to third printing. We reprint the second and fourth printings so you can see some of the differences.

The iconic minotaur picture, in particular, changed between printings. Which do you remember? That will let you know which printing you read. 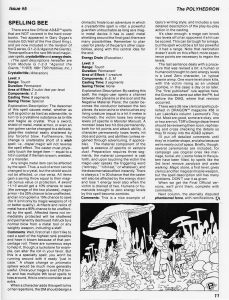 B1: Into the Unknown is more similar between printings, but does feature some changes in art and layout. These are subtle differences appreciable to a collector or historian, and one audience of this book is collectors. The most interesting change here, however, is the difference in cover art, from the mysterious original monochrome to the subsequent full-color Darlene cover. The original monochrome is one of the very few TSR covers signed by two artists, and has an unusual provenance related to an illustration eventually published in an issue of Polyhedron. We tracked down the origin of this odd story and relate it in the book.

Q: Did you change B1 and B2 to scale the number of monsters per encounter to reflect the change in design philosophies from 1E to 5E?

This is a direct conversion to remain consistent with the 1E original. This was more of an issue with B2, as B1 was stocked with 5E encounters by the author, which are (mostly) balanced for 5E. But our B2 conversion from 1E to 5E is exactly the same in regard to number of monsters encountered. If there were 17 orcs in one room, there are still 17 orcs in the 5E version. It’s up to the DM to mitigate this, or the PCs to use wise tactics (some described by Mr. Gygax himself, decades ago), or to use the age-old practice of “run away to fight another day.” The original B2 was itself not balanced in regard to encounters. There was nothing (aside from a few vague rumors) to prevent a party of 1st-level PCs from wandering into the upper caves, and facing down dozens of undead in one room (for example).

Q: Is there any chance of there being a large format release like the Judges Guild book?

Well, 384 pages is already pretty large, but no, for now the format is a typical 8.5 x 11 book. If there is sufficient interest in a large-format book we will consider that route.

Q: Will the book include any info from B1-9, or bring back Mystara, or update the setting to the Forgotten Realms?

No, this is a straight conversion and is world-agnostic.

Q: Why didn’t you expand on the Cave of the Unknown?

At 384 pages of content we’ve already covered a lot of ground! We do like the idea of postulating on what could be contained in the Cave of the Unknown—and perhaps our planned 5E subscription service might explore this idea a bit more.

Q: Will you convert the adventures to DCC RPG rules?

No, the only conversion is to 5E.

Q: Will this be a Kickstarter?

No, it will be a “normal” book release, including sales through retailers and distributors.

Q: Will the book be available in PDF format?

Yes! It will be released in both print and PDF. (NOTE! Since this article was originally posted we have learned that Goodman Games does NOT have the rights to produce a PDF version of Into the Borderlands. We do apologize for any confusion this might have caused.)

Q: When can I place my pre-order?

We hope that answers most, if not all, of your questions! Keep watching for the latest news on Into the Borderlands! 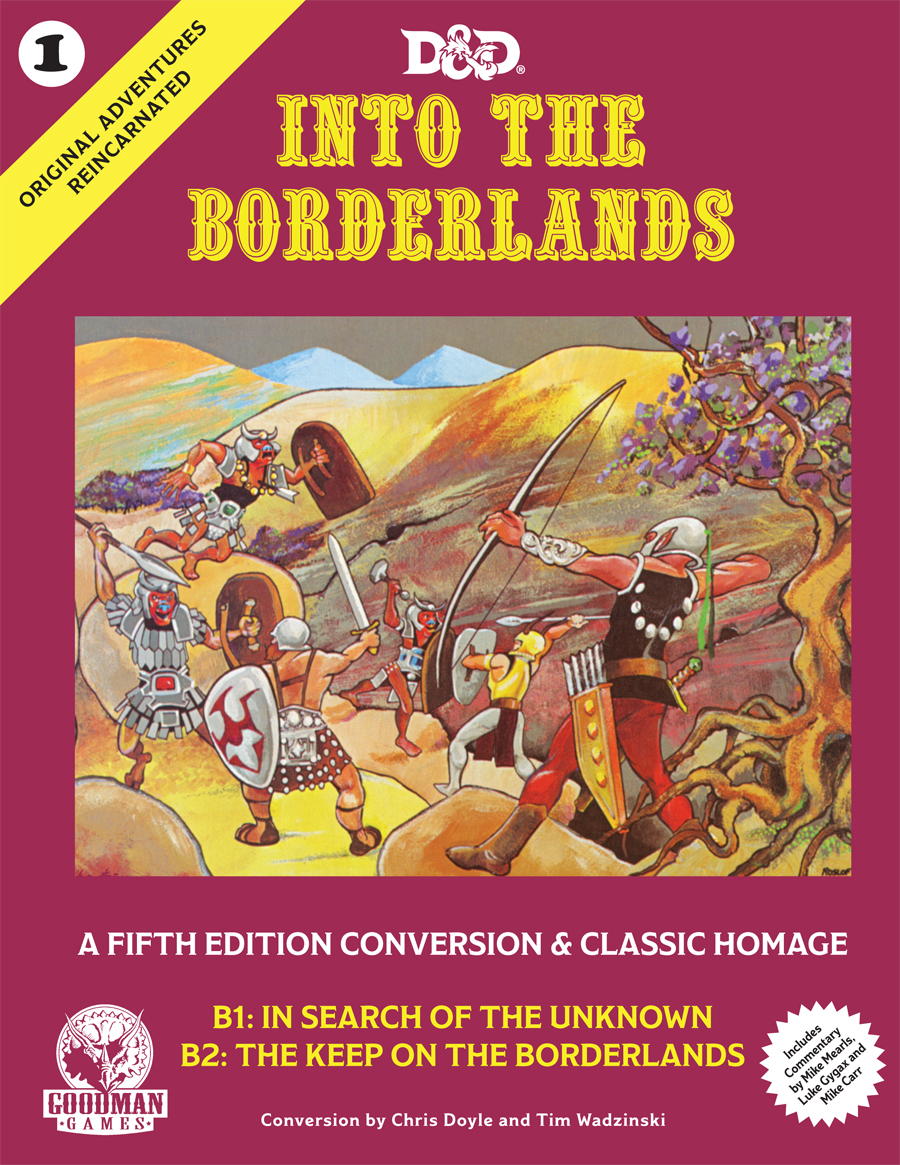