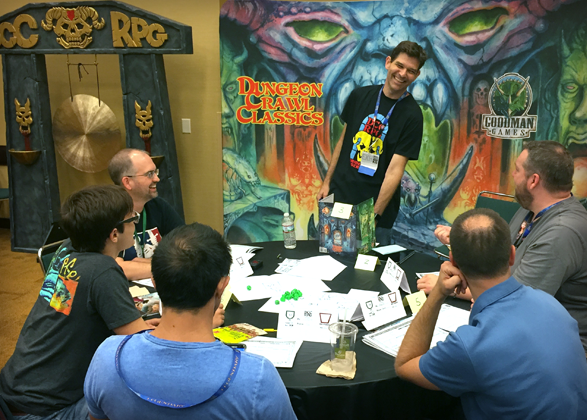 This year’s Gen Con DCC RPG tournament saw the return of the team tournaments of old. Like The Hidden Shrine of Tamoachan, The Ghost Tower of Inverness, and the inimitable Tomb of Horrors, teams of PCs were pitted against a killer dungeon, where only one party could triumph.

Building up to Gen Con 50, none of us really knew if DCC RPG could survive the group tournament setting. The game’s hallmark is its unpredictable nature, where the judge is often just as surprised as the players. Could we ensure that every judge would issue similar rulings? Could we allow for spell burn and Luck burn, when any spell check north of 25 can shatter the planet? And once all this was done, would it still feel like DCC?

But adventures are what we do best.

We gathered our finest DCC RPG designers working and asked each to submit multiple encounters. Many were rejected, most were re-written, and nearly all were altered to fit the strict tournament format. 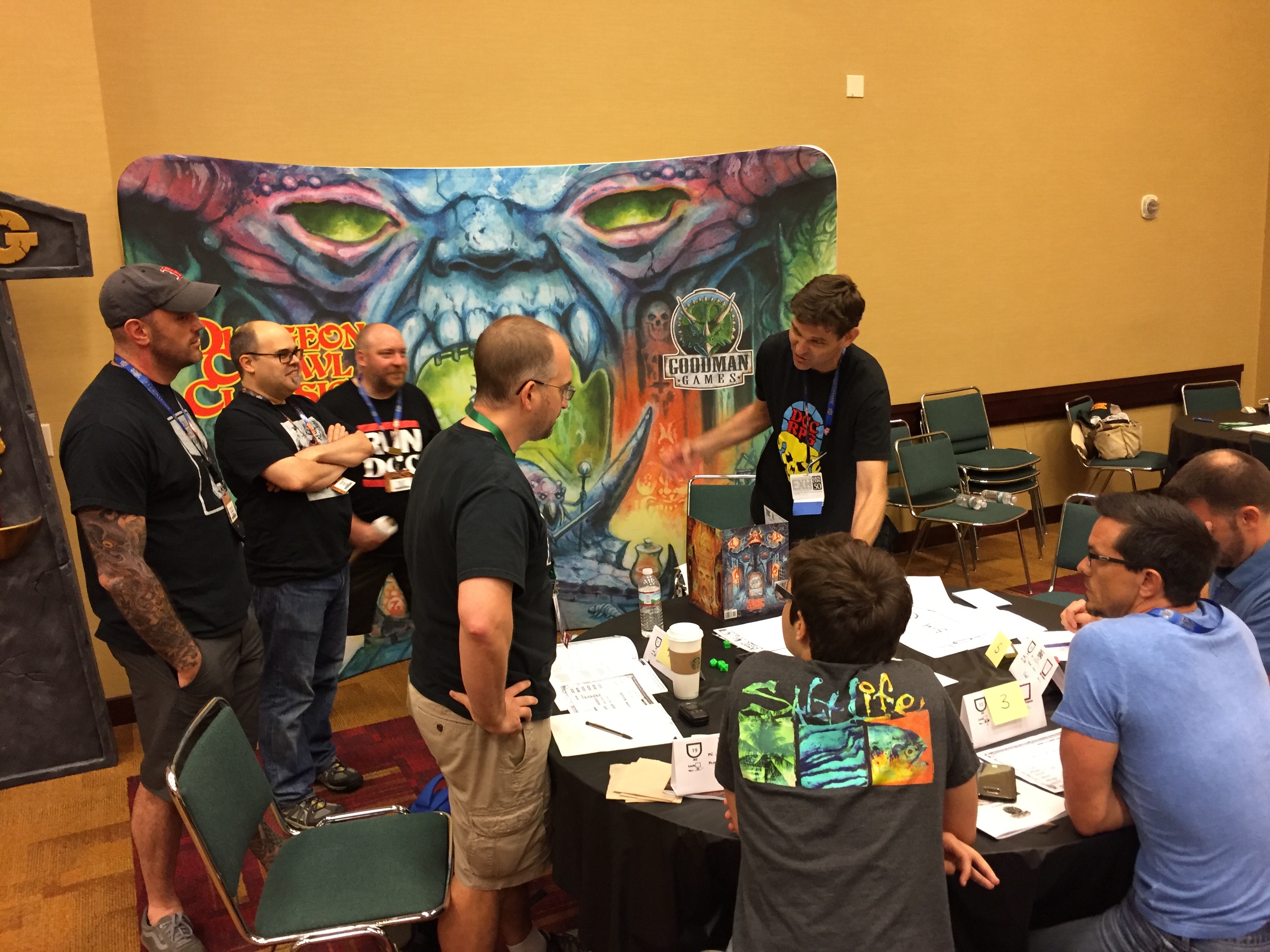 For scoring, we took an intentional step away from the familiar DCC team tournaments of old. Whereas previous tournaments offered points for specific solutions (“use the wand of cold against the fire elemental, +25 points”), the DCC RPG tournament focused on the ends. We didn’t care so much how you got there, as long as you arrived.

We didn’t know it at the time, but this simple choice would prove instrumental in the final round.

Once written, collected, and scored, we paired the adventures with the best judges we knew that were willing to run DCC RPG rules as written. After a preliminary meeting at Gary Con, each judge play tested his rounds, providing edits that were worked back into the adventures. Even during Gen Con we met nightly, reviewing the levels for the upcoming rounds, coming to consensus on rulings, revising encounter elements, and discussing potential solutions.

The first round teams were an even mix of battle-hardened grognards, tournament veterans, and wide-eyed novices who might have just signed up for the wrong event. One ticketed team even failed to show, forcing us to call out for volunteers willing to join the tournament.

The first rounds of the adventure unfolded as you would expect, with the cautious crawlers slowly outpacing their wild, charge-into-oblivion rivals. Ill-luck laid some teams low, the cleric death spiral claimed a few more, and Terry Olson’s mind bending puzzles did in the rest. The Medival Kenivals (the pickup team composed of random players) barely made it through in round one, edging ahead of tournament veterans Clan Yoeman and Kids by a scant 20 points. And by sheer dint of Luck, Emily M., playing the only Kenival alive at the end of the second round, succeeded in rolling her companions’ bodies and finished the level, pushing the them into the championship. 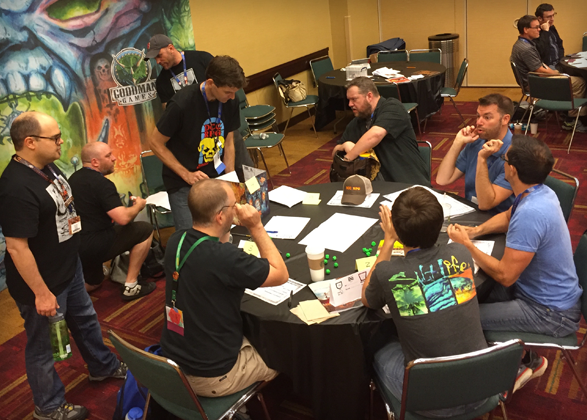 The final round ushered in two disparate teams:

Thanks to masterful play, the Blood Stallions had arrived largely intact, with only a few stats burned and limited cleric disapproval. All five players had been tempered in the fires of the first two rounds and they were ready to head home champions.

In contrast, the Medival Kinevals were down to a mere two players – the balance of their pick-up team having other commitments or having left town altogether. Not only that, but they were penalized for each non-showing player as if those players had died in the round – giving them a huge point deficit to overcome. A single wizard and elf were left to contest with the third and deadliest round.

And with the crash of Wayne Snyder’s Doom Gong, the adventure was on.

Deprived of nearly all their resources and facing nigh-certain destruction, the Medival Kinevals did the one thing every DCC RPG player can relate to: they started playing like zeroes.

First they looted the bodies of their fallen comrades. Lacking a thief, they resorted to that classic standby: the 10’ pole. Further, the tip of the pole was quickly muffled in a dead companion’s cloak to avoid drawing wandering monsters with their tapping.

They ran from every encounter, luring beasts into trapped portions of the dungeon. The monsters they couldn’t bait, they set aflame with the copious oil of their fallen brethren. They weaponized the dungeon, only resorting to spells and class abilities once every other avenue had been exhausted.

In an OSR game, by the time you decide to roll initiative, you’ve already ceded the battle. You’re putting your PC at risk, trusting that the dice will come up in your favor. The Medival Kinevals weren’t about to trust any dice. And in a tournament that scored the ends (Survive!) rather than the means (Survive in Clever Ways We’ve Prescribed), they had a chance to make a decent showing.

I had come to the game expecting a Sunday Morning Massacre. Suddenly we had a tournament. 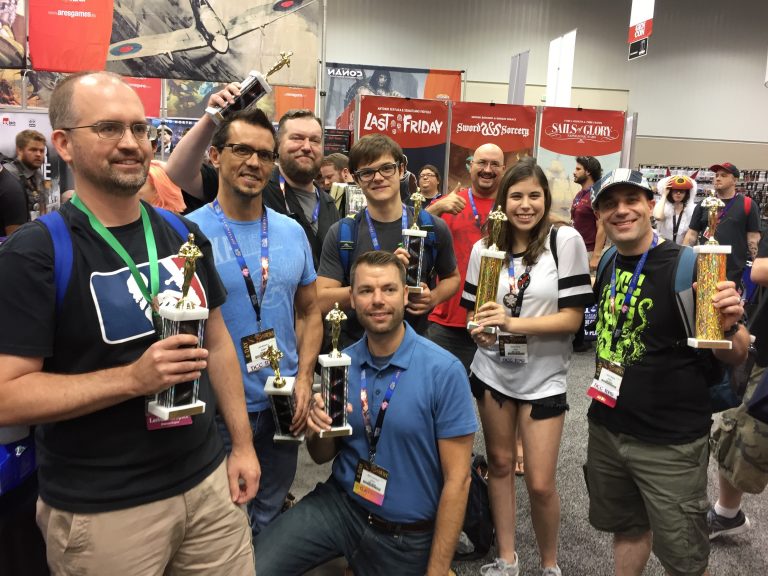 The game had to be run perfectly straight, lest the other teams think we had gone soft on the Kinevals. I demanded precise descriptions of every action, knowing that one misstep in key chambers could trigger any number of traps. Players couldn’t speak to each other unless their PCs were in the same room. Equipment and spell durations were assiduously tracked. Emily and Jason rose to the challenge. No quarter was asked for, and none was received.

The third round has a pair of puzzle rooms that serve as bottlenecks. In playtests, players unable to solve the puzzles would get hung up, and often withdrew to explore deadly red herrings. Miraculously the Medival Kinevals solved both puzzle rooms with ease, opening the rest of the dungeon to scoring opportunities.

Meanwhile, through no fault of their own, the far better equipped and numerically superior Blood Stallions found themselves confounded by one the earliest chambers. Minutes ticked by, indifferent to the team with the resources to dominate the rest of the level.

The Medival Kinevals reached the Black Heart of Thakulon with two hours to spare. They had beaten the tournament with the finest dungeon crawling I have witnessed in my 34 years of gaming. After marking the score sheets, I offered the pair the chance to continue playing, and in their first chamber after the close of the tournament, they triggered a deadly trap, releasing a demon of fire and soot.

The outcome was what I had been expecting since the beginning of the session: two rounds of combat, with a PC dying each round.

Across the gaming room, the Blood Stallions were almost out of time. Nearly two-thirds of the level was still left to be explored. At four hours the third and final round of the tournament ended with the crash of the Doom Gong, the few surviving Stallions never giving up and desperately still trying to battle their way into heart of the dungeon. 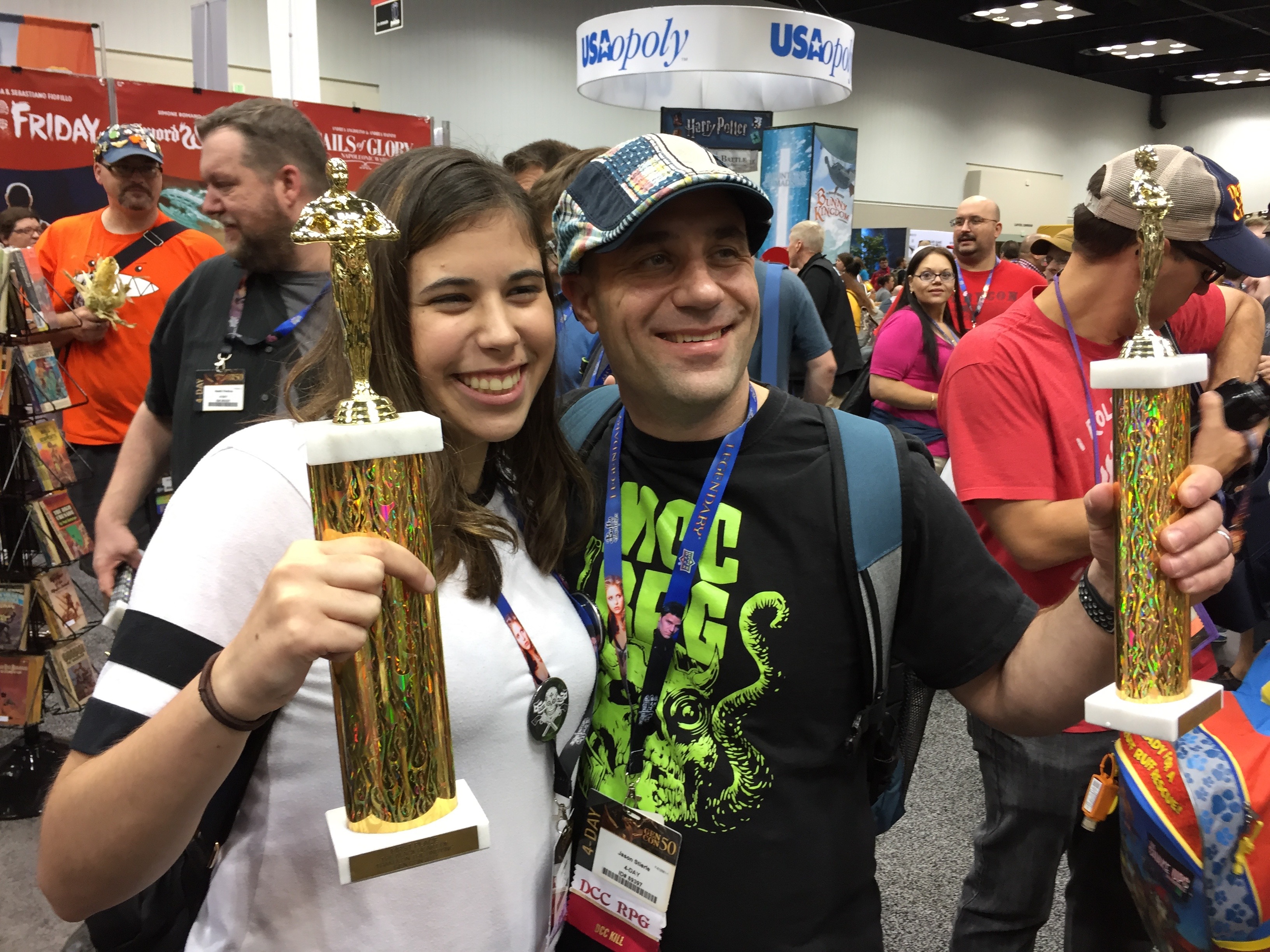 When we tallied the scores, it turned out that it had been a Sunday Morning Massacre, just not the one we had all expected.

If the Blood Stallions had been able to solve those first rooms more quickly, granting access to all the other scoring areas, the tournament might had a much different outcome. And a single misstep earlier in the dungeon would have doomed the Medival Kinevals. But instead, cunning, luck, and old school dungeon crawling carried the day, making the tournament the highlight of my Gen Con 50.