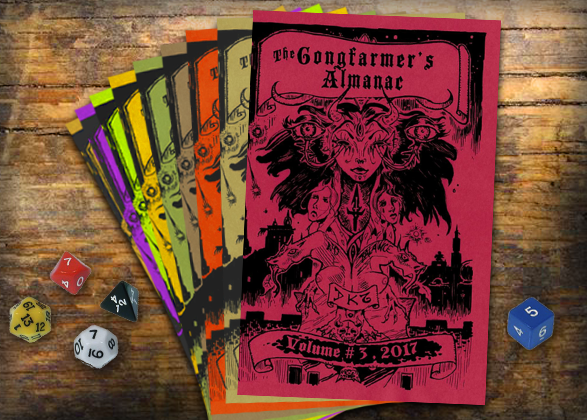 Did you know that the Goodman Games booth has a secret release every year at Gen Con? Well, don’t let anyone else know, but….

The Gongfarmer’s Almanac is a community project released for free available at Gen Con…but only if you ask for it. It’s not actually a Goodman Games release, but rather the result of lots of hard work by a community of dedicated volunteers. Now, for the first time ever, we’re telling you about it!

For the third year in a row, this fanatical group of DCC fans has written, illustrated, edited, laid out, proofread, funded, and printed an unofficial DCC RPG ‘zine for the Gen Con DCC crowd. The Gongfarmer’s Almanacs are offered free of charge at Gen Con, subject to the following limitation: while eight (8) separate volumes are being produced, only two (2) volumes will be offered each day of the convention. Volumes 1 & 2 will be available on Thursday, volumes 3 & 4 will be available on Friday, and so on. Any undistributed copies of prior days’ Almanacs will be offered for free pick up on the Sunday of Gen Con. But don’t count on there being copies left on Sunday! Remember, we’re printing only 100 copies of each volume, so come by the Goodman booth every day to get your Almanac!

This year’s Almanac is the largest edition to date. Eight volumes! Over 100,000 words!  Thirty-three authors, fourteen artists, twelve cartographers and graphic artists! All contributing their time and talent to bring you The Plane of Pandemonium—a fantastic mini-campaign setting of hex locations for DCC—along with all-new monsters, patrons, and adventures! It’s Gong-a-rific!

So stop by the booth each day of Gen Con 2017 and ASK for The Gongfarmer’s Almanac 2017, and it will be yours for free!