Forgotten Treasure: Hole in the Sky

Forgotten Treasure: Hole in the Sky

Hello fans! Welcome to “Forgotten Treasure”, a weekly feature wherein we discuss a gemstone from the Goodman Games backlist – something published more than a year ago and still worth playing! Some weeks we will delve deep into the catalog of things only available in PDF, and some weeks (like this one) we’ll talk about a more recent backlist item. The lucky book that gets to kick off this feature is DCC #86: Hole in the Sky by Brendan LaSalle. 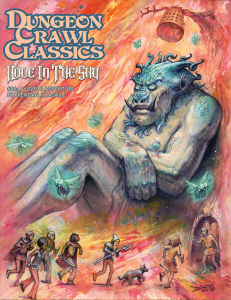 Hole in the Sky is a 0-level funnel wherein the characters, guided by dreams that something about their lives is just “not quite right”, are enlisted by the mysterious Lady in Blue for a cosmic task. The peasants that survive get the chance to change the very stars they were born under, and thus change their destiny- in other words, they can re-roll their birth augur.

The idea for the adventure came, as ideas usually do, from a variety of sources. Brendan has spoken before about how Black Sabbath was a huge influence on Hole in the Sky, particularly the song of the same name from his favorite of their albums, Sabotage. But the metal influence goes beyond that. Brendan explains:

“When I first conceived of the adventure I had an image in my mind from my teen years. One of the metal kids from my high school would draw these great black death album cover-style sketches in his notebook during class, and I was always looking over his shoulder while he worked. He drew several versions of one image, a huge muscled barbarian standing in the palm of some colossal demon – the demon was stabbing the barbarian through the gut with a single long talon on his other hand, and the sorry barbarian had a terrible look of pain on his face. Underneath in gothic letters he would print EXPENDABLE. If there is a word that describes zero level characters in a funnel it is expendable. I think this demon clawed his way out of my subconscious when I was first conceiving the adventure, and became the gigantic titan that has ruined the prospects of so many ambitious gong farmers and Halfling haberdashers in the years since I first ran it.”

As far as the unique reward at the end of the adventure, there’s a story behind that too. “Another big influence is NAME REDACTED, a friend of mine who just hated DCC the first couple of times he played with me. This is a fellow who loves building characters, and the strictly random style (and ultra low power) of creating new characters really rankled. But the very worst bit for him was the Lucky Roll. He rolled up three characters for the first funnel I ran for them (Sailors on the Starless Sea). He managed to roll a character with a very high strength and stamina, but his birth augur was ‘Survived the Plague: Magical Healing’.

Boy, was he pissed off. He railed on the whole unfair system for a while. And while Mister Redacted eventually came around and now really enjoys the game, the conversation really made me think about it.” 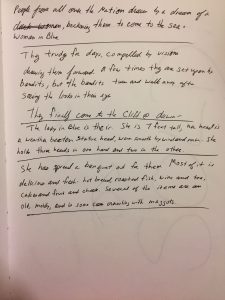 Brendan’s favorite part of the adventure is role-playing Cur Maximia, the patient and polite  listener who simply must insist that the intruders leave immediately, and who then punctuates that by tearing someone in half or burning them alive. But he’s also quite fond of the chaos pigs. “I ported chaos pigs over from my old Deadlands game, where they terrorized the Vermillion brothers gang as they made their way to Ogallala. They are, of course, my version of the demon pigs from the horror classic Evilspeak. I don’t know why, but the idea of chaos pigs tearing out of the ground and ripping a few goat farmers to shreds just makes me smile.”

Brendan is fond of putting easter eggs into his adventures, and Hole in the Sky is no exception. There is a dwarf in the module named Karlos Gend, and Brendan has finally revealed the layers in that name. Anyone who has watched Freaks & Geeks (and if you haven’t you really should) knows that James Franco’s dwarf character was named Carlos. Brendan says that a player at Gary Con once figured out where the first name came from, but no one has ever put together the whole joke. “Gend”, according to the article on the dwarf language in Dragon Magazine #278, means “danger”. So the dwarf’s name is really… Carlos Danger, the “nom d’amour” of Anthony Wiener, former New York congressman. “David Letterman was killing me with the Carlos Danger references at this time, and I had the jingle in my head (‘Carlos Danger, the Gaucho of Love . . Ole!‘), so I decided to stick that name in and see if anyone ever got the reference,” says Brendan.

It’s a fantastic adventure, but don’t just take Brendan’s word for it. Others have enjoyed it too:

Hole in the Sky color cover 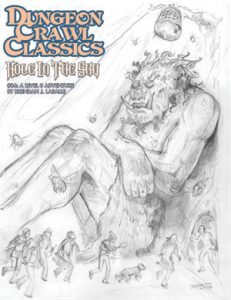 Hole in the Sky sketch cover 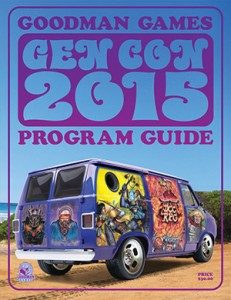