Our Appendix N Archeology and Adventures in Fiction series are meant to take a look at the writers and creators behind the genre(s) that helped to forge not only our favorite hobby but our lives. We invite you to explore the entirety of the series on our Adventures In Fiction home page. Adventures in Fiction: Philip José Farmer by Jeff Goad Today we are celebrating the birthday of Philip José Farmer. While he isn’t around to celebrate this day with us, his books are still here inspiring writers and game designers as they have for decades past. Farmer found early acclaim in the pulps, winning the Hugo in 1953 for Best New SF Author only a year after the publication of his first tale in Startling Stories. He continued writing for Startling Stories where his work would be found beside that of other Appendix N luminaries like Jack Vance and Fletcher Pratt. Other early works can be found in The Magazine of Fantasy and Science Fiction, a publication that features a letter to the editor from Gary Gygax himself in the August 1963 issue. Farmer’s first novel, The Green Odyssey, was published by Ballantine Books in 1957 and was the start of a prolific output of novels for Ballantine Books, Ace Paperbacks, and other publishing houses. He released 15 novels in the 1960s then topped that with another 23 in the 1970s! It was during this time that he crafted the World of Tiers series, which is specifically cited in Appendix N. The series consists of five novels written during the Appendix N era: The Maker of Universes (1965), The Gates of Creation (1966), A Private Cosmos (1968), Behind the Walls of Terra (1970), and The Lavalite World (1977); and two more books written later: Red Orc’s Rage (1991) and More Than Fire (1993). Half of the fun of being an RPG geek and reading Appendix N is spotting familiar monsters, spells, and other items clearly lifted from the text and placed directly into the game. This series is packed with great examples such as axebeaks, centaurs, dragons, giant insects, harpies, magic items, mammoths, planar travel, and super shady allies. Part of the fun is also seeing the kind of characters we want to play modeled for us in the fiction or imagining how we would port these characters into the rules system of... 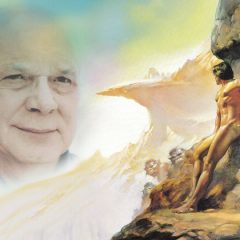