A Look at Savage Scrolls (Volume One) by Bill Ward New from Pulp Hero Press is Jason Ray Carney’s Savage Scrolls (2020), an anthology of contemporary sword-and-sorcery fiction. And make no mistake, this is actual sword-and-sorcery, not sword-and-sorcery used as a vague descriptor, a marketing buzz word, or a broad umbrella term for dark fantasy or fantastic darkness or pseudo-fabulist progwave interstitial slip-hop ironically-referencing-a-loincloth wannabe litfic masquerading as sword-and-sorcery. No, Savage Scrolls is refreshingly exactly what it purports to be, and it does what it says on the cover – providing a collection of contemporary sword-and-sorcery from some of the best modern practitioners in the game. Of course, one quick glance at the authors in Savage Scrolls is probably enough to communicate that point, especially for fans of Tales From the Magician’s Skull for whom the names Howard Andrew Jones, Adrian Cole, and James Enge always command attention. Indeed, those who have read TFTMS Issue 1 will have seen Jones’ Hanuvar tale from that issue, “Crypt of Stars.” In it, Hanuvar uses the bait of the fabulous treasures of his own family tomb to deceive and defeat his hated rivals, free and equip some of his captured soldiers, and lay to rest his fallen brother. Hanuvar is a wily, seasoned former general, who relies on wits over brawn to fight on in a one-man war against the empire that subjugated his people and defeated him on the battlefield, and his tales are tinged with irredeemable loss even as Hanuvar reaps his vengeance. James Enge’s “Laws for the Blood” presents a drunken Morlock (my favorite Morlock) with the problem of a rampaging goose-shaped killing machine left over from a town’s legacy of mutual hatred. Enge offers some wry commentary on human tribalism – including a dualistic pantheon granting its worshipers the attractive condolence of always having someone to hate – in this short tale of weirdness and Morlock’s characteristic quirky charm. The final TFTMS alum’s contribution comes in the form of Adrian Cole’s “Tower in the Crimson Mist,” one of the ongoing series of adventures he is penning for Henry Kuttner’s Elak of Atlantis. Anyone who has read these tales knows what a first rate job Cole has done to capture the clean, swift energy of Kuttner’s prose, and remain true to his characters and world while opening up the...

How I Learned to Stop Worrying and Love the Voidal by Fletcher Vredenburgh Ten years ago, I had largely given up on fantasy, swords-and-sorcery in particular. Fortunately, I discovered a few writers that pulled me back in, among them several veterans of Tales from the Magician’s Skull: Milton Davis, Howard Andrew Jones, and Adrian Cole. Kicking me right between the eyes with his stories of accursed interplanar wanderer, the Voidal, Cole, more than anyone else, broke me of a certain literary snobbishness I had developed. The Oblivion Hand (Wildside Press, 2001), is a fix-up of several published and unpublished Voidal stories. When I first reviewed two of them on my blog, Stuff I Like, a decade ago, I was less than kind. While I appreciated Cole’s inventiveness, I took him to task for some of his nomenclature and the cranked-up-to-eleven intensity of both stories, “Well Met in Hell” and “The Lair of the Spydron.” In The Encyclopedia of Fantasy, editor John Clute dismissed the series as “not serious.” While I didn’t dismiss them, I definitely agreed with that assessment more than I disagreed. As if fantasy could be considered acceptable only if it wasn’t too fantastic and if it took itself seriously. When I started a weekly book review column for Black Gate eight years ago, I made an effort to read as wide an assortment of sword-and-sorcery as I could, even if it meant picking up books I assumed I wouldn’t like. That led me back to The Oblivion Hand. This time I didn’t read only two stories, I read the whole thing, and it blew my mind. One of the things about fantasy, it would seem obvious, is that the only limits are those of the author’s imagination. Halfway through The Oblivion Hand, it became clear Adrian Cole’s imagination has no limits. None. By not reading all of The Oblivion Hand in the first place, I missed out on the full range of what Cole was doing. Instead of using just one more mock-medieval setting, he had, like Clark Ashton Smith and Jack Vance before him, wove something of whole cloth, new and original. Not only did he create one unique setting, he created one for each story; some bonkers, some beautiful. My impression that the stories were over-amped was a false one; Cole could bring the... 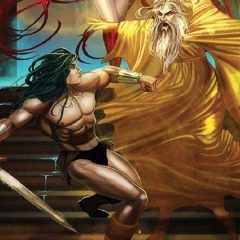 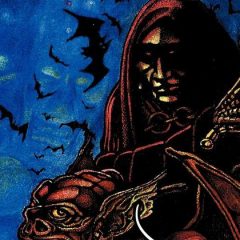 How I Learned to Stop Worrying and Love the Voidal by Fletcher Vredenburgh Ten years ago, I had largely given up on fantasy, swords-and-sorcery in particular. Fortunately, I discovered a few writers that pulled me back in, among them several veterans of Tales from the Magician’s Skull: Milton Davis, Howard Andrew Jones, and Adrian Cole. Kicking me right between the eyes with his stories of accursed interplanar wanderer, the Voidal,... 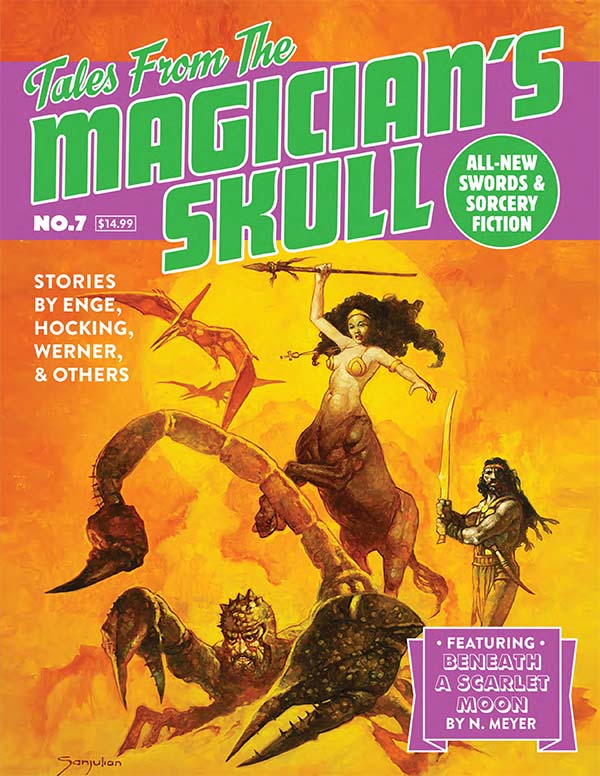