Our Adventures in Fiction series is meant to take a look at the writers and creators behind the genre(s) that helped to forge not only our favorite hobby but our lives. We invite you to explore the entirety of the series on our Adventures In Fiction home page.

August 16th we celebrate the birth of Andrew J. Offutt, whose passion and talent cemented him into the ranks of Appendix N.

Appendix N of the original Dungeon Masters Guide has become a Rosetta Stone for the study of the literary roots of D&D. One figure carved on that stone is Andrew J. Offutt, who is cited not for his own writing, but for editing the Swords Against Darkness heroic fantasy anthology series. Oddly, only the third volume of the five-book series is singled out and none of the other four books are even mentioned. Who then is Andrew Offutt, and why is he enshrined with the other Appendix N luminaries?

Andrew Jefferson Offutt V was born on August 16th, 1934 in a log cabin near Taylorsville, Kentucky. His parents had fallen on hard times during the Great Depression and were forced to rent out their farmstead and relocate to an older log cabin on their property that had “twelve-inch walls with gun ports to defend against attackers, first Indians, then soldiers during the Civil War.”

Offutt revealed little of his youth other than his eagerness to escape a backbreaking farmer’s life by any means possible. He was an avid reader of adventure fiction, especially Edgar Rice Burroughs, Robert E. Howard, Daniel Defoe, Alexandre Dumas, and Robert Louis Stevenson. By age 16 he had taught himself how to type, written two novels, and started drawing and writing comic serials. In 1951 Offutt won a Kentucky-wide high school fiction contest with his story “The Devil’s Soul” and also earned a full academic scholarship to the University of Louisville. Offutt’s first professional publication came while he was still in college when his story “And Gone Tomorrow” won a contest sponsored by If magazine in 1954. Offutt’s professional writing life truly began five years later with the sale of his story “Blacksword” to Galaxy magazine.

It took another decade for Offutt to become a full-time writer, as he and his wife Jodie McCabe Offutt had a rapidly growing family to support. Offutt wrote in the evenings after work and on the weekends, and like many struggling science fiction writers of the era, he turned to writing erotica for additional income. Offutt’s parallel career in erotica actually took off before his mainstream career and continued under a variety of pseudonyms (notably John Cleve and Turk Winter) until his death in 2013.

In 1970, Offutt closed his successful insurance business in order to be a full-time writer. His early published works were science fiction novels such as Evil is Live Spelled Backwards and The Castle Keeps, but thereafter Offutt turned to fantasy because it offered him greater imaginative freedom and the ability to avoid “the constraints of physical reality.”

Offutt’s affinity for heroic fantasy led to him being tapped to continue the adventures of Robert E. Howard’s Celtic pirate Cormac Mac Art, starting with Sword of the Gael. Howard’s Cormac Mac Art tales were straight historical fiction with the exception of “The Temple of Abomination” which featured King Kull’s great adversaries, the Serpent Men of Valusia. Offutt underlined Cormac Mac Art’s connection to Kull by making him a reincarnation of the Atlantean king and bringing back another of his iconic enemies, the skull-faced sorcerer Thulsa Doom.

Offutt got another chance to play with Howard’s creations when he wrote three Conan pastiches: Conan and the Sorceror, its sequel Conan the Mercenary, and The Sword of Skelos. Offutt got so much pleasure out of being able to continue the works of one of his literary idols that he put up a miniature shrine to Thulsa Doom in his backyard. Offutt earned enough on his Howard-derived work to enclose a side porch of his house, whereupon he paid another tribute to Howard by etching the name of Conan’s deity “Crom” into the cement floor after it was poured.

Offutt was a well-regarded mid-list author through the early 1990s during which time he edited the Swords Against Darkness anthologies, authored and co-authored standalone novels and the War Against the Wizards and the War of the Gods on Earth trilogies. He also created Hanse Shadowspawn, one of the most popular characters in the Thieves’ World shared-world fantasy series, which was the basis for Chaosium’s now-classic multi-system city setting box set.

Why did Gary Gygax include Swords Against Darkness III in Appendix N? The stories are solid, and the lineup of writers includes now well-regarded authors such as Manly Wade Wellman, Ramsey Campbell, David Drake, and Tanith Lee. Nonetheless, Swords Against Darkness III doesn’t seem to offer more than Lin Carter’s contemporaneous Flashing Swords! anthologies, which had even more star power with authors such as Poul Anderson, Fritz Leiber, Michael Moorcock, Andre Norton, and Jack Vance. The prime suspect for Swords Against Darkness III’s inclusion in Appendix N is likely Poul Anderson’s seminal essay “On Thud and Blunder”, which parodied common absurdities of sword and sorcery fiction of the era and sounded the call for writers of heroic fantasy to do their homework and at least nod to plausibility in their worldbuilding and storytelling. This manifesto surely had great resonance for Gygax, especially as it appeared in 1978 just as he was wrestling with his own authoritative statement on fantasy, the Advanced Dungeons & Dragons Dungeon Masters Guide.

The final tally of Offutt’s published mainstream fantasy, science fiction, and thriller output was 31 novels and nearly 40 short stories, which would have been a substantial body of work for almost any writer, yet it was dwarfed by his output of more than 400 erotica books under 17 pen names. Offutt’s parallel body of work was so vast that his own son Chris Offutt (a noted memoirist and writer himself) wrote that his father “had passed as a science-fiction writer while actually pursuing a 50-year career as a pornographer.”

Offutt wrote a largely tongue-in-cheek author’s bio for The Sword of Skelos but it does contain an apt credo for a writer of heroic fantasy: “Surely it is every boy’s dream to grow up—but not too much—and get to write about Conan.”

And be sure to visit our Adventures in Fiction home page to read about the classic authors of Appendix N! 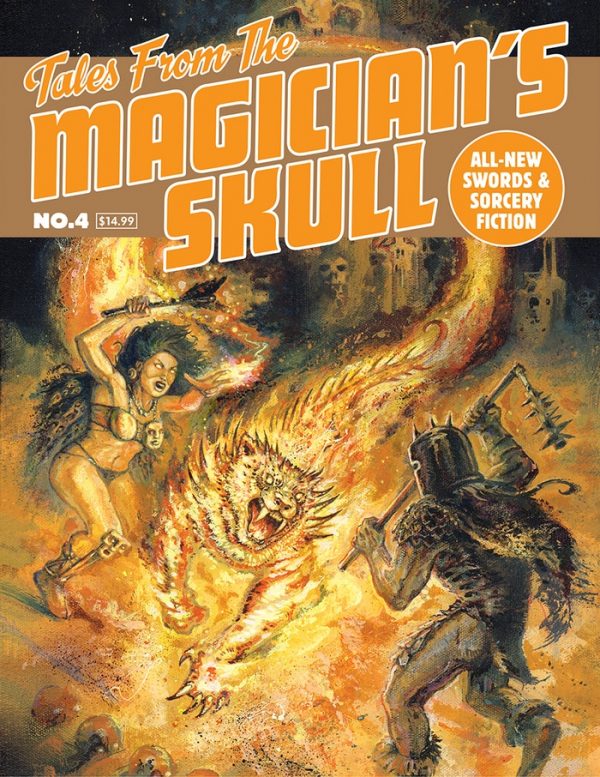