What games do you want to see? What can we do better?

A deck of tarot cards with classic style artwork would be boss. Toss in a sweet reference guide that lists potential in game DCC modifiers for each card (and its inverse) and maybe a cryptic fortune...

*Aherm* "Fate's Fell Hand" even has some examples of cards for the set on the cover! 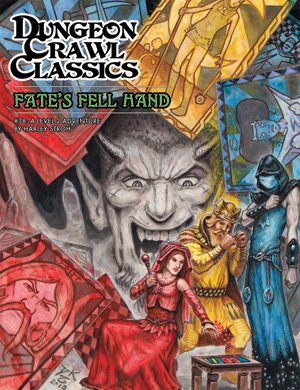 At the beginning of each session, we each take a moment to shuffle the deck of tarot cards and then one is chosen randomly by each player after everyone has shuffled. The card is read based on it's orientation (right side up or inversed) for flavor from the accompanying book. Finally, cards can be turned in and spent at any time during the session with the following effects:

It has worked out to be really fun thus far. Players can make of it what they want, but as folks have gotten accustom to the cards in play, their usage has turned out to spice things up nicely! In time, I may tailor the cards to being more specific effects but for now the broad application works. If you end up trying out this mechanism please let me know the results. Thanks!
Top