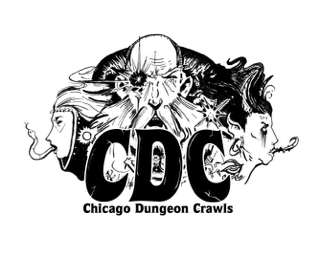 Welcome to the thirty-ninth installment of Chicago Dungeon Crawls!

Due to the plague all taverns and inns are closed in Chicago until further notice. But fear not, Chicago Dungeon Crawls continues! Join us online and have some fun. If you have any surviving characters from previous games, bring them! If not we will create some before we start. Start Time is Central Time Zone.
_______________________________
MAIN TABLE (Table 1)
System: Dungeon Crawl Classics
Adventure: The Emerald Enchanter (Part 2)
Judge: Tom

Last session’s adventurers made it half way through the dungeon, but there is much more yet to be discovered. Come out to explore the rest of the manse of the Emerald Enchanter! You do not need to have played the first half to take part.

Villagers have gone missing! A mix of clues, superstitions, and omens point to the brooding citadel of the emerald sorcerer. This silent monolith has sat undisturbed atop a windy ridge for centuries. Legends say that a green-skinned sorcerer dwells there, where he conducts strange experiments and builds enigmatic machinery. His green-skinned constructs patrol the grounds of his citadel, and he is seen only rarely when he ventures out on nefarious errands that end in horrid screams and strange lights coming from his citadel. Now it is time to penetrate his inner sanctum…