Hunting for Easter Eggs By Chris Doyle Publisher’s note: Read this designer’s diary after you have read OAR4: The Lost City! You will appreciate it more that way. One of the best parts about converting classic TSR adventure modules to the fifth edition of Dungeons & Dragons is hiding Easter Eggs. Since my early days writing for the 3.0/3.5 Dungeon Crawl Classics line, I’ve enjoyed placing Easter Eggs. Adventures are all about the players, but I’m guessing less than 10% of all published adventure modules are actually played at the table. Personally, I own more than 600 adventures (I have a spreadsheet!), and I’ve probably only gotten 1% to the game table. But Dungeon Masters (and gamers in general) enjoy reading adventure modules. And that is what the Easter Eggs are for: the readers and fans. Many of my Easter Eggs are inspired by popular culture of the 1980’s. I’m a child of the ’80s, and early in the decade was when I discovered Dungeons & Dragons (and role-playing games in general), which had a major impact on my life to this day. It’s fitting as many of the classic TSR modules we are converting for the Original Adventure Reincarnated product line were originally designed in the late ’70s and early ’80s. My other inspiration are classic adventure modules. SPOILERS AHEAD! It’s hard to talk about Easter Eggs without spoiling the surprise. Below are some details on a few of the Easter Eggs in B4: The Lost City. There are others to be discovered, but if you prefer not gleaning this information, please stop reading! Names are an easy target for Easter Eggs. Often, I’ll take a name and re-arrange the letters to form another name. Or name a place after someone. Here is an easy one: The underground lake in the cavern that houses the Lost City is named Lake Moldvay, after the original designer of the classic module. I can’t take credit for this, as I believe another author came up with it, but I did import it to the conversion. Here is another, somewhat obscure. One of the pre-generated player characters we included is a female human rogue named Dayla. This is a shout out to a serving wench (and cutpurse) Dala in the Waterside Hostel from the village of Nulb in T1-4: The Temple of...

Inspiring The Lost City By Chris Doyle Before I start an Original Adventures Reincarnated project, I often spend a few weeks reviewing the material to give me inspiration. Converting and designing The Lost City was no different. Off the top, here are a few of the more noteworthy sources I drew on for inspiration. I admit I’m not a hard-core Appendix N fan (sorry, boss). I’m a very slow reader, and it tends to put me to sleep. Sure, I’ve read Tolkien and a smattering of Lovecraft. But in the ’80s, my go-to fiction sources were Arthur Conan Doyle, Terry Brooks, and RPG gamebooks. Later on, it was Star Wars in all of its various forms. That said, in the past few years, I have read most of the Howard Conan short stories. And two in particular were inspiration for me regarding The Lost City: Xuthal of the Dusk, with its abandoned city in the desert and drug-induced population; and to a lesser extent, Red Nails, which shared many similar themes. I’m guessing these stories directly inspired Mr. Moldvay as well. When it came time to develop brand new material for the project, specifically designing The Lost City and the various catacombs below, I looked to other classic D&D gamebooks. For the city, I leaned on D3: The Vault of the Drow in an effort to capture the alien feel and scope of an entire city underground. Naturally, the Underdark and a review of the classic maps from the Dungeoneer’s Survival Guide was required when I prepared to design the catacombs below The Lost City. For adventures set in the Underdark, obviously I reviewed D1-2: Descent into the Depths of the Earth, and the 2nd edition Night Below campaign setting. When I got ready to design the goblin caves, I draw on parallels from Gygax’s own Caves of Chaos. A recent trip to Mammoth Caves in Kentucky was a great perspective for myself regarding rock formations and designing in a 3D environment, since the catacombs and caves were ripe with elevation changes. Another inspiration was the 1984 motion picture Conan the Destroyer. At the time (keep in mind I’m 14 years old), I thought this movie caught all the essence of D&D on the big screen. Sure, it was more light-hearted than the original movie, but it had fighters,... 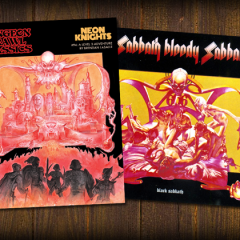 Black Sabbath and DCC RPG By Brendan J. LaSalle Spoiler alert! For everything I have ever written for DCC, and a few things I have yet to write. DCC is the most metal game I have ever played. And to me, the music of the book is every incarnation of Black Sabbath. My first encounter with Dungeon Crawl Classics as a fully-formed thing was a pair of playtests Joseph Goodman ran at a hobby shop in Atlanta. We played the adventure that... 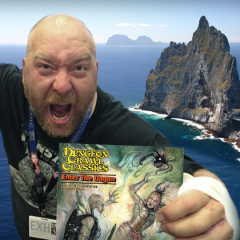 Enter the Dagon: Turning Reality up to 11 The origins of the Dagon spellduel tournaments have been recounted in previous Gen Con Program Guides, so in taking a closer look at DCC #95: Enter the Dagon, we opted to examine some of the peripheral details that help frame the adventure, to see how Harley (and other Goodman Games authors!) help bring their adventures to life. For the setting of the adventure’s eponymous island, Harley drew... 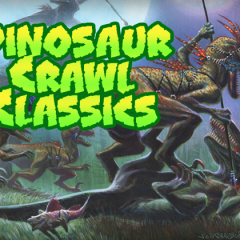 By Marc Bruner Chapter 1: From Dallas to Dinosaurs One of my favorite aspects of Dungeon Crawl Classics RPG is its adaptability. From the flourishing zine community that has produced annals of supplemental content, to the fantastic innovation on display annually at Doug Kon, it thrives in the hands of the players and judges who take the system and overlay their imaginations onto it. For myself, North Texas RPG Con has become somewhat...