Castle Amber Designer’s Diary #4: Required Reading by Michael Curtis Castle Amber may not be the most literary-inspired adventure, but I’m hard-pressed to name another one off the top of my head that owes so much of its existence to works of literature. While you’re eagerly awaiting the adventure to arrive in your hands (hopefully purchased through your local brick-and-mortar game store if you have one, because they need your business more than ever), here’s what you should be pulling off your bookshelf, checking out of your local library, or downloading onto you ebook reader to fully appreciate and run Castle Amber. “The Fall of the House of Usher” by Edgar Allan Poe. Not only does this classic Poe tale present a family and a house that is falling to pieces (an appropriate comparison to what’s happening to both the family and Castle Amber), but a pair of characters and events in the module are lifted directly from this story. I won’t give anything away, but you’ll know them when you see them. If you don’t have time to read the story (but it’s a short one, so that’s a terrible excuse) or you want to supplement your reading with the always fantastic Vincent Price, check out the 1960 Roger Corman B-movie version of the story.“We Have Always Lived in the Castle” by Shirley Jackson. Jackson, one of the great macabre writers of the 20th century, tells the story of an isolated family despised by their neighbors and dwelling alone in a dilapidated mansion just outside of town. A terrible event shrouds the surviving family members in an aura of mistrust and the main character dwells in a world of her own making. Not only does it give you that great weird family in a ruined home vibe, but I added my own nod to Jackson’s story to the expanded Castle Amber.The Averoigne Cycle of stories by Clark Ashton Smith. If you’ve not read any of these weird fiction tales of an imaginary medieval French province and that which lives within it, you’re depriving yourself of some of Smith’s best work. Even if you never expect to run any version of Castle Amber (much to your own detriment, I assure you), you simply must read the Averoigne stories if you’re a fan of the pulp fantasy and horror traditions....

Castle Amber Designer’s Diary: Castle Renovations by Michael Curtis One of the great benefits of working on any Original Adventures Reincarnated book is you get to play in the sandboxes other talent designers constructed. This gives you the opportunity to embellish on existing works, adding flourishes and the occasional entirely new area or three to surprise players familiar with the original work. Castle Amber was no exception and, with an already weird castle and eccentric occupants to start from, I had a much freer hand in bringing more to the feast (and not just the ghostly one, either). I started by taking a look at the existing castle and immediately saw what was missing: there’s a whole lot of people living in the place, but very few beds for them to sleep in. With nowhere else to go but up, I added a second story to both the East and West Wings of the chateau, providing plenty of space for new mundane room, then immediately twisted them into something more at home in Castle Amber. Many of the rooms are the quarters of individual Amber family members, allowing both the DM and the party greater insights into these individuals’ personalities, interests, and—in some cases—plots. Other rooms range from the dangerous, to the beneficial, to the downright zany. So no matter what door the party opens, something interesting should be behind it, waiting for them. As I was going up, Bob Brinkman started digging down. In the Indoor Forest, the original adventure states that one of the Amber family has a hunting lodge of sorts located beneath a hill. The adventurers, if unlucky, might even see the hunting party emerge from their subterranean lair and ride off to track down prey—most likely the PCs! But what if the hunting party gets defeated or if the PCs figure out a way to get under the hill by their own efforts? Bob managed to build a weird little mini-dungeon to expand on what Castle Amber has to offer adventurers. Lastly, people familiar with the adventure might recall that it takes a prolonged detour into the writings of Clark Ashton Smith, specifically his Averoigne cycle of stories. TSR originally received permission from the Clark Ashton Smith estate to include material taken directly from Smith’s own work. Nearly forty years later, we didn’t have... 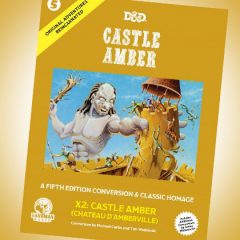 Castle Amber Designer’s Diary #4: Required Reading by Michael Curtis Castle Amber may not be the most literary-inspired adventure, but I’m hard-pressed to name another one off the top of my head that owes so much of its existence to works of literature. While you’re eagerly awaiting the adventure to arrive in your hands (hopefully purchased through your local brick-and-mortar game store if you have one, because they need your business...

Castle Amber Designer’s Diary: Castle Renovations by Michael Curtis One of the great benefits of working on any Original Adventures Reincarnated book is you get to play in the sandboxes other talent designers constructed. This gives you the opportunity to embellish on existing works, adding flourishes and the occasional entirely new area or three to surprise players familiar with the original work. Castle Amber was no exception and,... 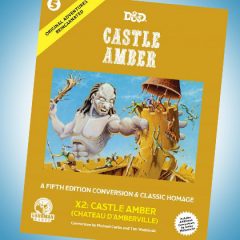 Castle Amber Designer’s Diary: The Magnificent Ambers by Michael Curtis Castle Amber is more than just a funhouse dungeon, although that’s easy to overlook, especially for younger game masters. While there’s plenty of monsters to fight and treasure to be looted, the Castle features something that was uncommon for many early adventures: plenty of roleplaying opportunities in the form of the Amber family members The Ambers aren’t...

Castle Amber Designer’s Diary: We Have Always Lived in the Castle

Castle Amber Designer’s Diary: We Have Always Lived in the Castle By Michael Curtis Castle Amber is one of my favorite modules, hands-down. From the moment I picked it up at Great Escapes Hobbies in the Sun-Vet Mall in 1981 to the minute I’m writing this, I’ve loved “Chateau D’Amberville” and all its weird inhabitants. Like a good novel, I appreciated it on one level when I was 10 and another when I’m (mumbles something... 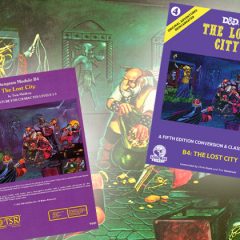 Hunting for Easter Eggs By Chris Doyle Publisher’s note: Read this designer’s diary after you have read OAR4: The Lost City! You will appreciate it more that way. One of the best parts about converting classic TSR adventure modules to the fifth edition of Dungeons & Dragons is hiding Easter Eggs. Since my early days writing for the 3.0/3.5 Dungeon Crawl Classics line, I’ve enjoyed placing Easter Eggs. Adventures are all about the...

Inspiring The Lost City By Chris Doyle Before I start an Original Adventures Reincarnated project, I often spend a few weeks reviewing the material to give me inspiration. Converting and designing The Lost City was no different. Off the top, here are a few of the more noteworthy sources I drew on for inspiration. I admit I’m not a hard-core Appendix N fan (sorry, boss). I’m a very slow reader, and it tends to put me to sleep. Sure,...

Designer’s Diary: The Process of Converting a Classic Adventure Into An Original Adventure Reincarnated

The Process of Converting a Classic Adventure Into An Original Adventure Reincarnated By Chris Doyle When interacting with the fans of the Original Adventures Reincarnated books, often the first question I get is, “How do you go about converting the module to fifth edition?” (This is usually followed up by, “How can a 32 page 1st edition module end up as a 300+ page homage?”, and “How come a pdf doesn’t come with the book?”). Today...

EXPLORING THE LOST CITY By Chris Doyle I consider February 2, 1981 as the date I started playing roleplaying games. That is the day when I came home from school and sitting on the dining room table was the Dungeons & Dragons Basic Rules boxed set, obtained from Sears via mail order. This was the set graced with purplish-hued Erol Otus cover art of an underground scene depicting a fighter and a magic-user (before we called them... 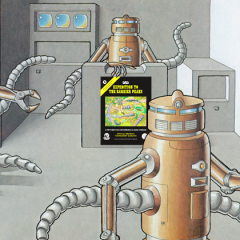 Barrier Peaks Designer’s Notebook #3: The Future Was Then 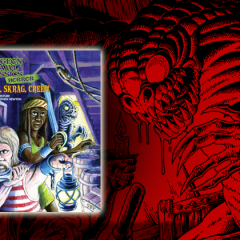 Designer’s Diary #2: All the Easter Eggs in Creep, Skrag, Creep

All The Easter Eggs in Creep, Skrag, Creep By Stephen Newton “They fastened around my waist another black and silver symboled belt, and set upon my head a chaplet of the black oak leaves. De Keradel drew from his belt the maul and put it in my hand. I shrank from its touch and dropped it. He picked it up and closed my fingers around it. I tried to unclose them and could not, although the touch of the maul was loathsome. I raised the... 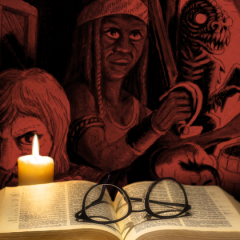 Designer’s Diary: Creep, Skrag, Creep! By Stephen Newton “De Keradel is an enthusiast, and thorough. Like Napoleon, he knows that you cannot make an omelette without breaking eggs; nor can you have meat without cattle; nor human sacrifices without humans.” – Creep, Shadow!, Abraham Merritt I chose that quote to set the mood for the DCC Horror adventure, Creep, Skrag, Creep! It is one of my favorite quotes from one of my favorite... 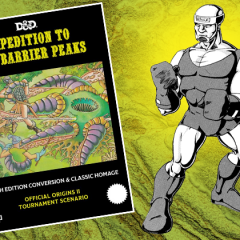 Barrier Peaks Designer’s Notebook, Entry #2: All the Androids Were Karate Fighting (and Fencing and Boxing too)!

The excitement for OAR #3: Expedition to Barrier Peaks continues to grow, and everyone here at Goodman Games is excited about the book and sharing it with fans. We already shared Michael Curtis’ first Designer’s Notebook entry, and now we continue with the second part, talking about some of the combative moments in the adventure. And don’t forget, you can now pre-order OAR #3: Expedition to the Barrier Peaks in our...