Hail to the Khan of Cons!

Hail to the Khan of Cons!

The San Francisco Bay Area was jubilant in its return to the Khan of Cons, KublaCon — and Goodman Games was there! Fans were excited to pick up the Original Adventures Reincarnated series, the DCC and DCC Lankhmar adventures they were missing, and to finally learn How To Write Adventure Modules That Don’t Suck. Glaciers which were Frozen in Time were explored, gongfarmers fell in love (because it was the age of Love in the Age of Gongfarmers), and one mighty player who wished to crash a game Sunday night crashed his way into running a game for the attending players — an instant ascendancy into DCC Judgehood and Road Crew-dom! We’d very much like to thank Aldo, Mike, Tom, and everyone on the KublaCon team who made the weekend great for us and great for all the attendees! We will see you again next year, Kubla...

Check out our MomoCon memories! It was another great, long weekend of chaos, costumes, and comradery at this year’s MomoCon — and we’ve got the pics to prove it! Jen, Dieter, and Brendan were on the scene representing the Goodman Gang at the booth and on the gaming tables . . . as was a certain Chaos Lord and that pint-sized terror Emogoth the Danged, Lord of the Print Mines. We caught up with both Brendan and Dieter for their report: Brendan’s take: After three years away, Goodman Games gratefully made it back to Atlanta for MomoCon! If you haven’t had the opportunity, MomoCon is a fantastic fan con, an amazing anime fan event, a wonderfully diverse gathering of folks into every kind of fandom with a burgeoning RPG scene that grows every year. This was a fantastic weekend of gaming and fun, all watched over by Molan the Chaos Lord! There were DCC games going all weekend long for curious newcomers and old fans alike, along with celebrities, video games, costume events, and so much more! We had a fantastic time, rolling dice and sharing the Goodman energy. Huge thanks to the attendees, staff, and organizers, and a very special thanks to RPG coordinator par excellence Ginny Loveday. See you in 2023! Dieter’s take: From the booth perspective, it was great! At a game convention, you can pretty much assume that even if people haven’t heard of DCC RPG, they have played RPGs and know what they are. Not so at a place like MomoCon where the main focus is anime! We had people at the booth who started the conversation at “What’s a roleplaying game?” or “What’s D&D?” The best part is . . . we made a couple sales to those people! There were certainly a few hard core DCC fans there as well, but most of the people we sold to were completely new to the game. My personal highlight, though, was Friday night when I got nerdcore rapper Mega Ran to name drop Andre Norton in his freestyle segment. Here’s just a sample of the fun from this year’s... 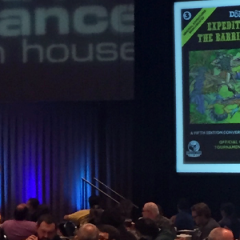 The Alliance Open House is one of the premier industry events of the tabletop gaming world. Every year hundreds of retailers and manufacturers gather together to showcase their products and share information and news. This year Goodman Games was at the show once again, doing just that: letting retailers know about Dungeon Crawl Classics, Mutant Crawl Classics, Fifth Edition Fantasy, Original Adventures Reincarnated, and much more. In... 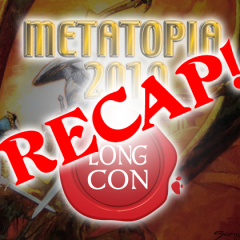 Goodman Games had a busy weekend! We were at two conventions and two game stores over a course of four days, and each one was a wonderful experience! At Metatopia, Jim Likes Games made sure that Goodman Games’ presence was felt. Metatopia is the only convention fully devoted to game design and playtesting, and the likes of Dungeon Crawl Classics, Mutant Crawl Classics, Original Adventures Reincarnated, and many others all had... 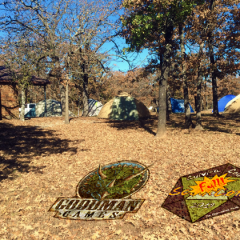 Our very own “Taco” Jon Hershberger represented Goodman Games at Quivira Scout Ranch this past weekend for ScoutCon 2019. This was our third year for ScoutCon and it was bigger and better than ever! The 2019 version of Scout Con was the biggest and best to date. This year there was 285 Scouts registered for the con—that’s up from 112 registrants in 2017 and 184 registrants in 2018—and had 282 in camp.  Dungeon Crawl Classics was... 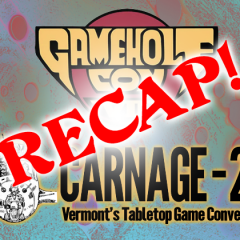 A fabulous weekend of two cons! Both of them were amazing, and one even had a night filled with monsters…and superheroes…and fairies…and just a wonderful time. At Carnage-22 there was lots of gaming and lots of fun for all as they came by the Goodman Games booth to find the latest releases. It was a DCC RPG extravaganza, with a touch of Fifth Edition Fantasy and Original Adventures Reincarnated thrown in for good... 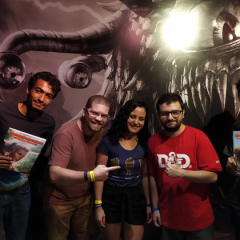 Fifth Edition Fantasy Around the World: FEF in Brazil! 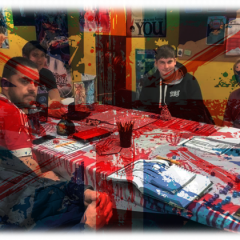 DCC Around The World: The UK Road Crew

The UK convention scene is growing. For many years Great Britain has been blessed with a plethora of small one day conventions and ‘game days’ around the bigger events like UK Games Expo and Dragonmeet. With the recent growth in these events, it feels like a weekend rarely goes by without someone posting a session report or a review of a convention. It’s a great time for Road Crew judges to get out and run some... 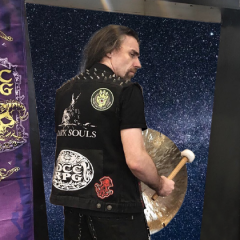 DCC Around The World: The Doom Gong at Essen Spiel

Maybe we should call it Das Monument des Schicksal? Whatever words we choose, it would still have the same message. The same deep, reverberating message. Essen Spiel is the largest gaming convention in the world, and we’re proud to say that Dungeon Crawl Classics was on hand for the world to see. Our publishing partners in Germany—System Matters Verlag—were at the game fair, showing off DCC RPG in style. Including their own... 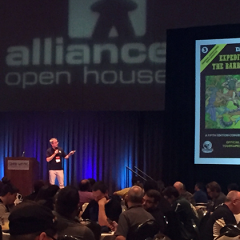 The city of Fort Wayne, Indiana has once more had the gaming industry descend upon it, and has emerged all the better for it. And what’s more, the Alliance Open House has had Goodman Games come to it once again, and has found themselves better for our presence! Hundreds of retailers met with dozens of manufacturers at this annual industry event, and Goodman Games was a huge part of it. From the meetings, to the presentations, to... 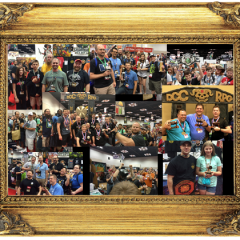 All The Tournament Winners!

For several years now, Goodman Games has been running tournaments at conventions across the country. Gen Con has seen the lion’s share of these events, but we’ve slowly expanded to other shows to allow more people a chance to prove their mettle in the ultimate arena of role-playing talent. We’ve had folks dealing with everything from Beer Golems to Black Hearts, and even a chance to prove themselves The Greatest... 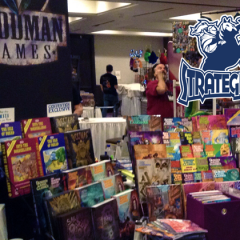 Labor Day weekend 2019, and Goodman Games was in LA as part of Strategicon: Gateway! Somehow within the hotel we fit in all of Lankhmar! The Starship Warden flew in! Even the sprawling estate of Tegal Manor was brought in brick by brick and reassembled right next to Grimtooth’s Trapsylvania. Folks visited The Inn at Five Points, and discovered there are No Small Crimes in Lankhmar, thanks to Thom Denick of Weird Works. ... 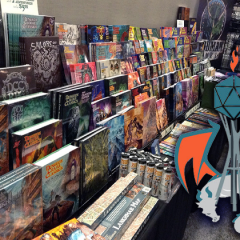 Over this past weekend, August 16-18 in Bellevue, WA, Dragonflight 40 happened—or Dragonflight XL, as they styled it—and Goodman Games was there in XL style! Fans found modules and books they wanted, Lankhmar fans scooped up maps and adventures, giant volumes of Metamorphosis Alpha, Grimtooth, and Judges Guild found new homes, and many at the con happily discovered Dungeon Crawl Classics for the first time. There were even a few Bronx... 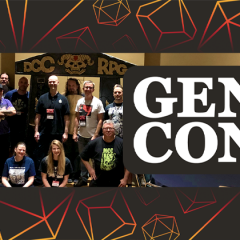 Photos From An Amazing Gen Con!

We’re back! To say we had an amazing Gen Con is a vast understatement. Every aspect of the show exceeded our expectations and left us wanting more—as well as exhausted. And we’ve got pictures to prove it. In fact, we’ll start off with a lovely time-lapse of us setting up the Goodman Games booth this year! It shows a very brief view of how things go from a blank slate to a full booth in just a few seconds, even if it...