The idea of a dungeon hidden beneath a building in town is an old one in gaming. This past August I had the opportunity to visit one that exists in real life. Gilmerton Cove is far from a megadungeon, but it is large and old enough to be interesting—and it certainly has lessons for the prospective Game Master.

Gilmerton is a suburb of Edinburgh, Scotland, that used to be a coal mining settlement. In the 1700s, George Paterson, the local blacksmith, claimed to have dug the caves himself from the sandstone bedrock from 1719-1724. It seems impossible that the chambers could be carved by one person in so short a span, and there are several other theories of how the caves came to be. One is that it was a coal bore, where miners sought a coal seam that failed to manifest. Another is that the cove is 2,000 years old, and was actually a druidic temple. No one is certain.

One of the features of the Cove is a well, which does not normally hold water.  Nearby is a “forge” that shows no signs of soot. Had it been used as an actual forge, the sandstone would have cracked. A bowl-like depression in the “forge” suggests a sacrificial altar, and that the “well” might once have held the sacrifice-in-waiting.

Two filled-in tunnels lead to the northeast and northwest. Tradition suggests that one of these lead to nearby Craigmillar Castle. Other theories suggest that tunnels were used by a local Hellfire Club, Knights Templar, or Presbyterian Covenanters hiding from the State. It is possible that “Cove” is a shortening of Covenant or even Coven, rather than meaning simply “cave.” Masonic marks can be found carved within. One tunnel might run to Roselyn Chapel, which is associated with the Templars and the Holy Grail. Acoustic archaeology has shown that the system may be much larger than the section currently known, so more clues may eventually be uncovered. One problem facing archaeologists is that the tunnels run near the surface under roadways, so removing the backfill could result in serious problems.

So how can Gilmerton Cove improve our games? 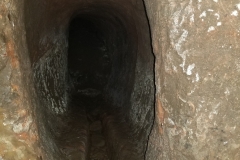 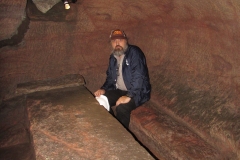 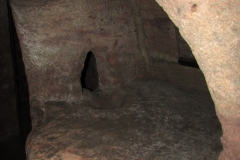 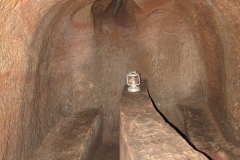 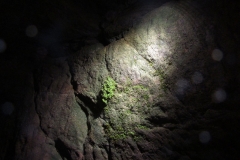