The 2019 Free RPG Day event has come and gone, but the effects still linger. And we want to share some of them.

We asked you guys to send us pics and stories from your own Free RPG Day experiences, and now we want to share some of our favorites. It seems that a great time was had all over the place, and we are already excited to see what the 2020 event will spark with fans. For now, let’s share some stories! (And then some pics after that….)

From Christian Ovsenik (at Gamer’s Armory):

We love Free RPG Day at The Gamer’s Armory. Our Road Crew has been going strong for 2 years at this point. I (Judge Christian) ran Hole in the Sky in the morning (with a custom Wheel of Destiny) for a few players. I killed 15 peasants, allowing 6 to level up to level 1 and gain classes. Players loved the maps I printed and the travel to another world involved in the adventure. They really liked spinning new destinies for the peasants who survived (and maybe ending up with peasants who had died).

After providing a very detailed account of his full Free RPG Day adventure running Geas of the Star-Chrons (from the new DCC Quick Start Rules), Jeff told us how it ended…

They cut the rope holding the platform and the goblins plummeted to their deaths. The thief was able to make his roll to determine the cadence of the ritual and made it into the circle. He attacked Yndrkalla and she made the roll to continue the ritual. Thief asked if he could explain to the dwarf how to time it to cross into the circle, dwarf made his Intelligence roll and made it. Yndrkalla realized she was going to get crushed so she cast Charm Person on the dwarf, intending to get him to kill the thief, and the dwarf made the Will save. They killed Yndrkalla.

They went for Yndrkalla’s quarters and immediately went behind the black curtain. They fought the fleshy Yndrkalla and barely won. They looted the room, went out and the Star-chon appeared, attacked, and eventually killed the dwarf by turning him to ice cubes! The thief decided to run for it. the Star-chon rolled a natural 20 (hurray!) and destroyed the thief.

We all had a blast. Julian, thanks for writing such a great adventure!

Thanks for those great accounts of the day! And now…pics! 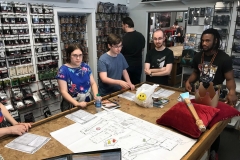 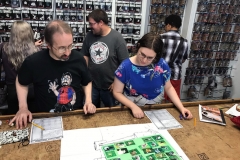 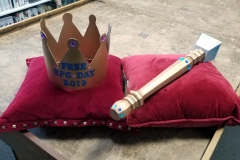 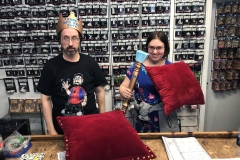 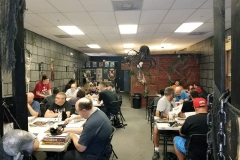 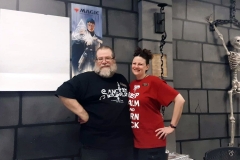 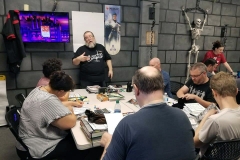 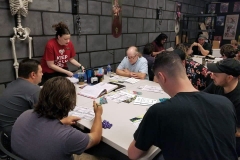 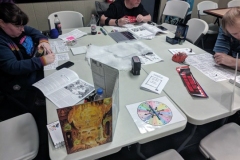 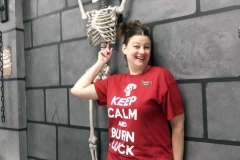