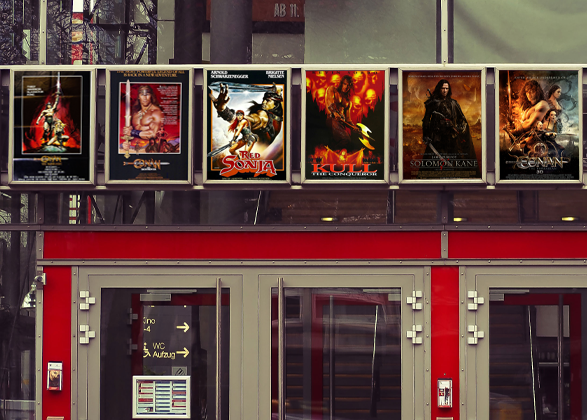 The wonderful thing about Appendix N is that the authors’ work often leapt off the page and into other mediums – such as film and television. The works of those authors influenced the early days of D&D and continue to do so. Likewise, the adaptations of their works on screens both large and small, have also conjured forth inspiration for gamers since the early days. When looking to explore Appendix N fims and television, Robert E Howard is the perfect starting point; both approachable and easy to find. Down the road we may dig up some rare and obscure adaptations but, until then, here are the Five (and a half) films of Robert E Howard, skipping television (three series, two of them animated) and the most recent direct to video Red Sonja. Here is what you should know about these very loose adaptations. 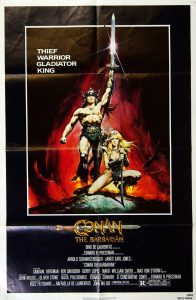 This film is the gold standard by which sword & Sorcery films are judged. While not the first film in the genre, this movie certainly changed everything. As far as Howard adaptations go, it is the most successful, both commercially and with fans. Schwarzenegger’s massive form and thick accent created a lasting image of Conan that burned the character firmly into pop culture so deeply that it still resonated today.

We are treated to several moments worthy of Howard’s creation: seductive witches, daring temple heists, a villain from the Kull series (seriously), and some grand carousing. This movie is full of inspirational fodder to bring to a game table.  Mighty deeds of arms, eldritch wizardry, loyal comrades, and vile foes. One can see the predecessor of the DCC Lankhmar “Meet” when Conan and his companion Subotai first meet Valeria amidst competing burglary attempts. 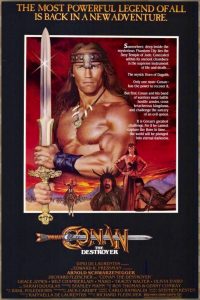 Originally announced as Conan: King of Thieves, a new direction was decided upon and the movie was edited to receive a PG rating. Dubious decisions mar the production: the wasting of Andre the Giant by burying him in a full-body costume, the original intent to cast David “Squiggy” Lander as the thief Malak, the inclusion of the character of Malak, the list just goes on.

That said, as a general sword & sorcery movie, it is still a good deal of fun. Malak plays out as that gamer pal that we all have that is more interested in wise-cracks than rolling dice while Grace Jones simply devours scenery (and a part of Wilt Chamberlain’s ear) as Zula. Each of the support characters have their moments to shine, making this more of an ensemble film about an adventuring party than one centered on its titular barbarian. 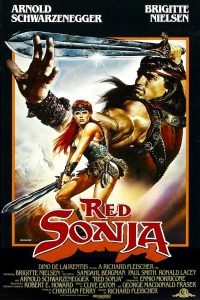 Here is our “half” film. REH created the character Red Sonya of Rogatino – a fiery-haired fighting woman from 16th century Europe. Red Sonja, the metal-bikini wearing “she-devil with a sword” was a comic book creation very (very) loosely based on Sonya. That would be the end of the Howard connection right there if it weren’t for Arnold Schwarzenegger (appearing as High Lord Kalidor) “co-starring” alongside, then unknown, Bridgit Nielson. This is the last film to attempt to maintain the feel of the original Conan films, but it just can’t manage it.

Weak cinematic tropes coupled with forehead-slappingly bad solutions just suck any fun out of this movie. Add to this the overly annoying presence of child martial artist Ernie Reyes Jr and… Yeah, just skip this one. Trust me. The Red Sonya/Sonja issue even lead to a lawsuit, reading about which is almost as entertaining as this movie. When one of the choices for the starring role, Sandahl Bergman (Valeria from Conan the Barbarian), passes on the role to play the villain? ‘nuff said. 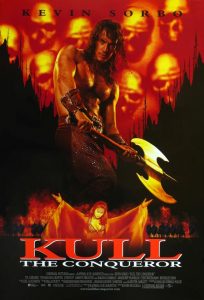 Originally planned as Conan the Conqueror, Schwarzenegger’s contract was up had run out. Committed to Predator, and likely a little sore about how his Red Sonja “cameo” was expanded, renewal was out of the question. The script languished for 10 years before being recast with Kevin Sorbo in the lead as Kull. The producers managed to strip everything from this movie that had made Conan popular: the sweeping grandeur of Basil Poledouris’ soundtrack, the presence of box office star Schwarzenegger, and grand exterior vistas.

There really isn’t a lot to show from a movie that had the EXACT same budget as the original Conan outing. The story is loosely taken from the Howard tale “Hour of the Dragon”, making it the most “authentic” of the Howard films but one can bypass this movie completely and be fine. For the record though, it is still a better movie than Red Sonja and die-hard Conan buffs may enjoy seeing Sven-Ole Thorsen in yet another Howard film (his fourth to Schwarzenegger’s three) 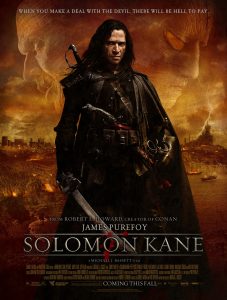 Probably the second-best film adapted from REH’s works, Solomon Kane still diverts greatly from its source material. Going into this expecting the character portrayal to be faithful would be a grave mistake. Meant to be the first of a trilogy, the following movies were intended to draw more heavily on Howard’s original stories after catching the attention of the audience. Sadly, that plan failed.

What we did get though was a fast paced, high-adventure film that vacillates between trapped by the formulaic and harkening back to the action of movies such as Highlander. Solomon Kane, the famed Puritanical demon hunter, is given a solid backstory treatment as he wages his one-man war against the forces of darkness. Ghouls, demons, sorcerers, and flintlocks. You know you want to watch this movie. 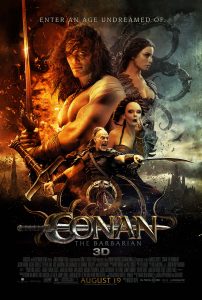 A movie that the presence of Jason Momoa couldn’t save…but oh how he tried. A lot of thought went into the movie, Momoa feels more like the literary Conan that Schwarzenegger ever did, and location shooting in Bulgaria returned us to a world with wider scope that didn’t feel like a crowded mass of set pieces.

The movie is true to its sword & sorcery roots and is enjoyable as schlock in its own right – perhaps just below Conan the Destroyer. The fight scenes are as bloody as anything Howard ever wrote, and really do capture the visceral gore in a way that even the original movie didn’t. But it is all quickly downhill from there. Two dimensional characters and ponderous visual effects that just smash into the screen in a blur leave are just bewildering. This movie could’ve been fantastic. It should have been fantastic. It just wasn’t.