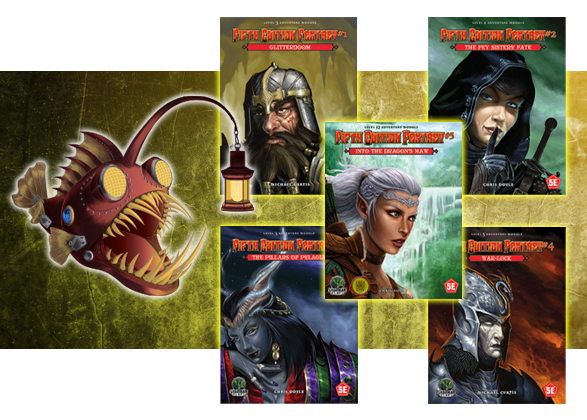 You may remember us talking about the fine folks from Sagen Editora and their crowdfunded campaign to create Portuguese language editions of Goodman Game’s Fifth Edition Fantasy series. Well, the campaign was a huge success and they are excited about bringing the modules to a whole new audience.

But that’s not all…the Brazillian company has come back and added a late pledge option for folks who missed out on the initial campaign! So it is not too late for anyone to get ahold of these new Portuguese editions of our Fifth Edition Fantasy line. They are also using this as an opportunity to expand the stretch goals! So this is a chance to get even MORE modules translated in this initial campaign!

Our Fifth Edition Fantasy line is a series of adventures that can be worked into almost any campaign—or as a stand-alone one-off experience. They are meant to only take a session or two, and help to create a fun, exciting atmosphere for the world’s first fantasy role-playing game.

We encourage our Brazilian fans to reach out to and show your support! You can find Sagen Editora on Facebook and Instagram, as well as their web site!

It’s the last chance! There is no late-late pledge option coming. Go show some support for this campaign while you can!