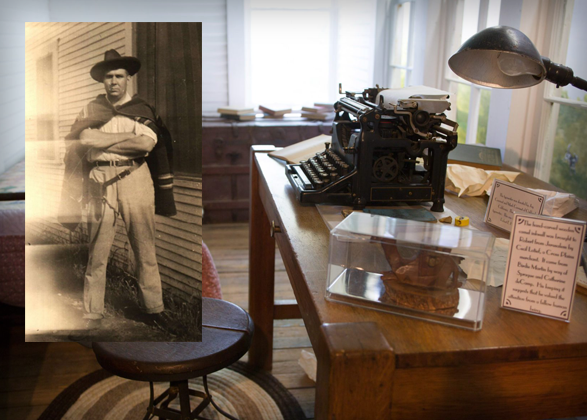 113 years ago, Robert E. Howard was born. Best known for his character Conan, Howard also created Solomon Kane, Kull the Conquerer, and the sword and sorcery genre as we know it today. If you play D&D or DCC, you have touched Howard’s work, whether you know it or not. To honor his birth, we present this special installment of Real Life Adventures, where intrepid writer-adventurer Marc Bruner visits Howard’s birthplace in Texas. 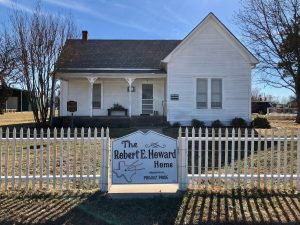 The restored house, now a museum that welcomes visitors and Robert E. Howard fans from around the world.

On a cold winter day with skies just blasted clean by a windstorm, I made the journey to Cross Plains, Texas to visit the former home of Robert E. Howard, now a museum dedicated to providing a window into the life of this iconic father of the sword and sorcery genre. The drive takes you through rolling hills of post oak, heavy mesquite and cedar, past towns that are little more than a post office with quirky names like Zephyr, Bozar, and Rising Star, and through Brownwood, where Howard went to senior year in high school, places Howard would have known intimately in the way of a small-town resident. The ridges are now capped by great wind turbines that stand like sentinels on the horizon, but it is a landscape not unlike the one in central Texas that inspired the fantasy land of Cimmeria with is sullen hills and bitter hardness, that “…endless vista – hill on hill, Slope beyond slope, each hooded like its brothers.” (From Cimmeria, by Robert E. Howard.)

Robert E. Howard was born on January 22, 1906 to Dr. Isaac Howard and Hester Ervin Howard. As a child, the Howards moved frequently, the family following his father’s medical practice through boomtowns and cowtowns across the southwest before settling in Cross Plains in 1919 when Howard was 13, and where he lived until his death in 1936. If you are ever in the area, it is well worth a visit. 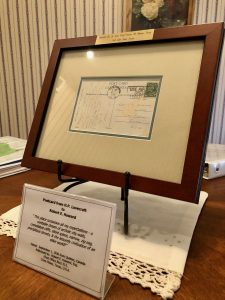 A postcard from H.P. Lovecraft in 1930, near the beginning of the correspondence between the two iconic Weird Tales authors.

Cross Plains is located among the rough Texas plains that break against the eastern edge of the high plateau of the Llano Estacado, and is about 2 ½ hours by car from both Dallas and Austin. Founded in 1877 as a small ranching and farming town with little more than a general store, a cotton gin and gristmill, Cross Plains was named for the crossings of stagecoach and military roads that predated the civil war and eventually was the location of a turnaround spur of the Katy Railroad, which brought new jobs and trade to the area. Even after an oil boom in the 1920s, though, Cross Plains was still a small town of around 1500 people when Howard lived there, and the nearest ‘big’ towns of Abilene and Brownwood themselves only boasted populations of 10,000 people each.

Each year, the residents of Cross Plains host the Robert E. Howard Days on the second weekend in June – this year just happening to fall on the same weekend as the North Texas RPG convention – where they receive over a hundred visitors, Howard scholars and fans from all over the world, opening up the house to a weekend of events, with some staying for as long as a week to visit one of the places central to Howard’s writing career. The museum is open by appointment as well if you happen to visit at other times of the year. 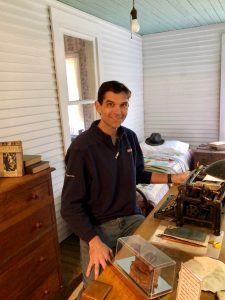 The author in Howard’s compact bedroom. The Underwood No. 5 manual typewriter is the same model that Howard owned to create his epic stories.

The house itself is a simple whitewashed structure, restored to its original condition by Project Pride – a non-profit organization whose primary purpose is to promote the Cross Plains area and to preserve and document the history of Cross Plains – and listed in the National Register of Historical Places since 1994. In recent years similar houses have been found in other nearby Texas towns, hinting that the original structure was likely built from a common design or kit. Inside the home has been thoroughly furnished with period items, many not original to the Howards but reconstructed from the descriptions of visitors to create an appearance that would not have looked out of place in the 1920s and 30s. The generosity of people connected to Howard is evident, and a number of items donated over the years can be found throughout, some following a circuitous route of discovery in an old forgotten attic trunk or found among the possessions of distant relatives. L. Sprague de Camp, Howard’s controversial editor after his death, donated several pieces once owned by the Howards that help capture the feeling of a connection with the author and his family. Howard’s room itself was originally a part of the house’s screened-in sleeping porch and is surprisingly cramped. From this small pocket of West Texas, however, he reached out to a literary circle that spanned the world. 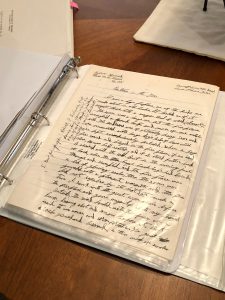 Copies of Howard’s earliest writings are on display, showing his burgeoning interest in history and language.

At the time, the Cross Plains school Howard attended only went through tenth grade, and he had to go to nearby Brownwood for his senior year. There he met lifelong friends of like literary minds and received his first published work in the school newspaper, The Tattler. Amazingly, examples of Howard’s high school essays have survived and copies are on display at the museum, revealing a command of language that is impressive for a 15-year-old. After graduation, he returned to Cross Plains where he would remain the rest of his life, though he would make short trips around the southwest, seeking stories and inspiration for his writing. 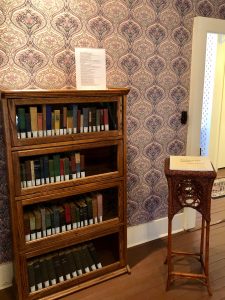 Howard’s collection of books. Roughly 70 works out of his 300-book library that was donated to Howard Payne College in Brownwood after his death have been re-acquired by the museum.

Howard was not embraced by the town, at least not until many years after his death. His father wanted him to go to college and have a profession, perhaps even as a physician like himself. Howard strived to be a writer from a young age, though, and had little interest in other subjects like science and math, delving into history and literature and poetry with an avid thirst. Until he could support himself through writing alone, he held many odd jobs, most no longer than a few months because he couldn’t stand the limits they placed on his freedom. His singular focus made him stand out in this small town, making him a curiosity at best. His habit of speaking aloud his stories as he typed them out was well known among his family and infrequent visitors, and he could sometimes be seen around town acting out his stories – like one memorable time when he walked down the street wearing a sombrero with his pants rolled up to his thighs punching the air and talking to himself – he was practicing fight scenes for one of his depictions of boxing.

Walking through the house is a singular experience, giving both a feel for the period and the writer himself. It is amazing to turn a corner and see a bookcase filled with books from Howard’s personal collection – he was a lover of the written word and had a library of more than 300 novels and collections of poetry – the works that he read and re-read as a child growing up in a small Texas town and while he was writing, from authors like Yeats, T.E. Lawrence, Edward Fitzgerald – his own Appendix N. The museum also has a number of rare and unique items on display, from photographs that capture images of Howard throughout his life, to copies of his intriguing correspondence with fellow Weird Tales author H.P. Lovecraft that shaped much of his period as a pulp writer. 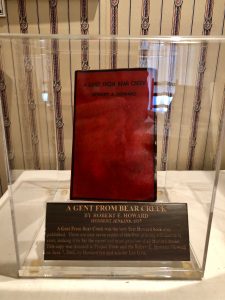 A Gent from Bear Creek. Published the year after Howard’s death, this rare first edition is a copy of the one owned by the museum that is on display during REH Days and is one of the few not destroyed during the lead-up to the second World War when paper shortages led to reclaiming many books for pulp.

If you go, take the time to also visit the town itself. The former ice house where Howard used to box with friends is now owned by a construction company, but has been partially restored and is used for readings of Howard’s stories during the REH Days. The city library is home to several original Robert E. Howard manuscripts and offers extended hours for visitors in June, and there are several excellent places to eat including the Staghorn café on main street where you can order a chicken fried steak as big as your plate. Many of the residents also have some tale to relate of their own, a story or anecdote passed down from family to family, some with the ring of truth, others that have been shaped by time and distance into something more like the tales told in the pulp magazines, the pages of which Howard filled with words. Howard himself was an avid storyteller, and would have recognized the tradition of sharing yarns to provide a spark of a connection to distant events.

Regardless of whether you come during REH Days or make an appointment for a private tour, if you are a fan of Robert E. Howard, do not miss the chance to explore this interesting and thoughtful museum that provides a unique view into his life. And when you visit, be sure tell the fine folks at Project Pride that Goodman Games sent you!

Check out our selection of Robert E. Howard’s pulp reprints, and the rest of our Appendix N reprint selection!