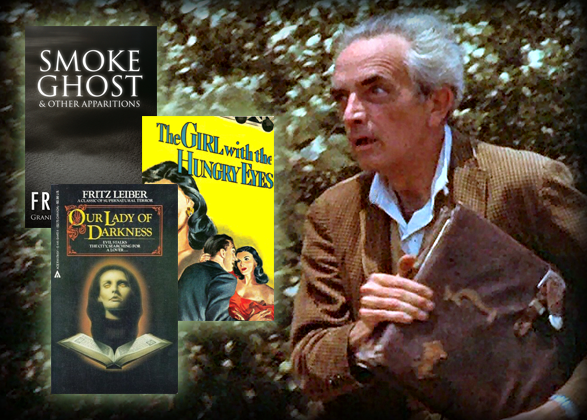 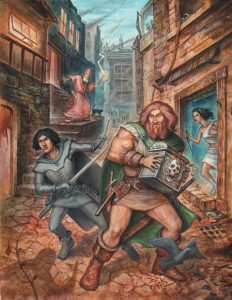 We’ve talked a lot about Fritz Leiber, whose birthday we’re celebrating today, over the last few years. Leiber, born December 24th, 1910, is most widely known among gamers as the man responsible for the fantastic Fafhrd and Gray Mouser stories. In the years running up to the looming-ever-larger-on-the-horizon release of DCC Lankhmar, a lot of ink has been spilled discussing Leiber’s most famous creation. Today, however, we’re going to examine some of Leiber’s other work and see how we can apply it to our games—especially DCC Lankhmar.

In addition to writing science fiction and fantasy, Leiber also penned a number of short stories and novels that fall into the categories we now call “urban fantasy” and “urban horror.” These tales occur against the backdrop of the modern world, examining what happens when the supernatural intrudes on the everyday. The stories helped pave the way for the explosion we’re now witnessing in these genres, and much like Dungeon Crawl Classics itself, we see that going back to the beginning of the genre pays us great dividends. 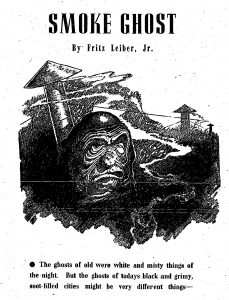 The first story of merit is “Smoke Ghost,” published in 1941. It concerns the woes of a man who believes he’s seeing a sooty, sack-like form manifesting on a rooftop as he takes the train home each night. He speculates that what he is seeing is a form of modern haunt, a ghost not of a deceased soul, but a composite of “the hungry anxiety of the unemployed, the neurotic restlessness of the person without purpose, the jerky tension of the high-pressure metropolitan worker, the uneasy resentment of the striker, the callous opportunism of the scab, the aggressive whine of the panhandler, the inhibited terror of the bombed civilian, and a thousand other twisted emotional patterns.” What would an entity like this crave? Sacrifice? Worship? Or just fear? Before long, he realizes that this urban spirit is actively pursuing him for its own dark ends.

The idea of a spirit manifesting from the emotional landscape of a city is an intriguing one, a sort of urban elemental comprised of the fears and desires of thousands of citizens made real by their subconscious. We could speculate how that might happen in Lankhmar or another fantasy metropolis. Imagine a supernatural entity spawned from the greed of the guilds and the desire for power of the Overlord, mixed with the despair of the slum-dweller, and the fear of the pursued thief. Such a creature might demand worship from the city’s populace in exchange for temporarily allaying their personal fears and wants. It might also amplify the residents’ anxieties, feeding on them like a vampire. And how does one fight such a ghost when it’s not truly an un-dead creature? 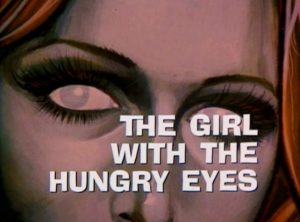 A mention of vampires brings us to the next story, one of Leiber’s more famous non-fantasy of the sword-and-sorcery kind. It is considered by many to be a classic vampire story of the modern age and regularly appears in horror anthologies dedicated to blood-sucking revenants. It was even adapted to television in the anthology series, Night Gallery.

That story is “The Girl with the Hungry Eyes,” published in 1949. It is the account of a photographer who first discovered the Girl, an advertising model whose image is sweeping the nation. His tale is a cautionary one, an attempt to alert the reader that the Girl is more than what she appears, and that her hungry eyes desire something it might be lethal to satiate. While it is a vampire story, it’s far from the usual one. You’ll find no bloodletting, no earth-filled coffins in the crypt, no capes or cowls. Leiber provides a modern take on the vampire myth, and gives us new ideas to play within the context of a roleplaying game. 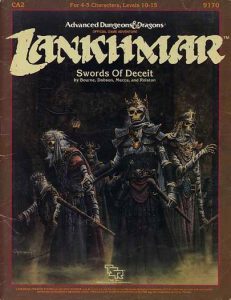 Lankhmar seems the ideal place to stage a vampire tale despite the fact the Leiber never did so himself. An early TSR module includes a vampire-themed adventure—“One Night in Lankhmar (Makes a Proud Man Humble)” from CA2 Swords of Deceit—but it’s more gothic that urban horror. Using our DCC eyes, we can envision a new vampire in the Girl vein (see what I did there?), one who sups not on blood, but perhaps Personality or even Luck, draining his or her victims of their essential psychic vitality in a need to sustain their need for adoration. Rather than a photographer’s model, the vampire might be a performer, a courtesan, an oracle, or any other profession that thrives on attention, but can come and go without revealing anything about themselves.

No examination of Leiber’s “urban horror” work would be complete without mentioning Our Lady of Darkness, considered by some to be his finest novel. It’s certainly his most autobiographical, telling the story of Franz Westen, a fantasy and horror writer living in an old apartment building in San Francisco while struggling to cope with both his alcoholism and the recent death of his wife. 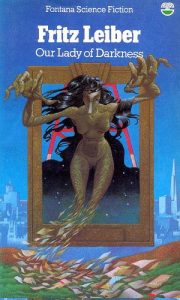 Westen discovers two strange books while on a drunken binge: a silken-paged journal and a book entitled Megapolisomancy: A New Science of Cities. The first, Westen believes, is a diary written by Clark Ashton Smith. The second is the work of a modern day magus named Thibaut de Castries who is convinced of both the danger of modern cities and the occult power they possess. He claims the power to work megapolisomancy, a form of geomancy that taps into a city’s inherent magical power to produce terrible effects. Cities, de Castries also argues, are home to supernatural entities called paramentals, and Our Lady of Darkness really gets rolling when Wesen observes—or maybe is observed by—a paramental, and finds himself hunted. Unraveling the mysteries of de Castries’ final years in the only way he can save himself from the occult forces at work in the City by the Bay.

The concept of megapolisomancy is a wonderful one and easily mined for adventure ideas in DCC RPG campaigns. In the case of Lankhmar, an ancient city already home to supernatural forces, what better enemy for the players than the city itself? Not the cadres of sorcerers and thieves and other threats, but a sentient metropolis with the power to tumble buildings down on its enemies or summon city elementals that form in drifts of refuse or appear as manlike swarms of roaches or silverfish? Perhaps bringing sacrificial offerings to the Spire of Rhan or tracing a chalk pattern around the Fountain of Dark Abundance are means of tapping into Lankhmar’s natural magical network and twisting it against ones foes? There is an abundance of adventure seeds waiting to sprout in both Our Lady of Darkness and the magic of megapolisomancy. Plus, who can turn down a novel where Clark Ashton Smith, himself, plays an important role? 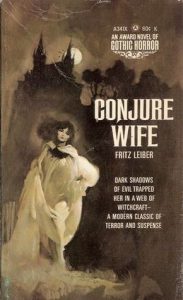 Readers and judges looking for more inspiration in the “urban horror” genre by Leiber are encouraged to also acquaint themselves with “The Hound,” a modern take on the werewolf myth, “The Button Molder,” a tale of perceptions gone awry (or perhaps not), “Horrible Imaginings,” a ghost story of sorts set in another San Francisco apartment building, and, lastly, Conjure Wife, Leiber’s other excellent urban horror novel that involves secret witches at work in the world of academia. None will disappoint and all provide entertaining fodder for your next DCC RPG game.