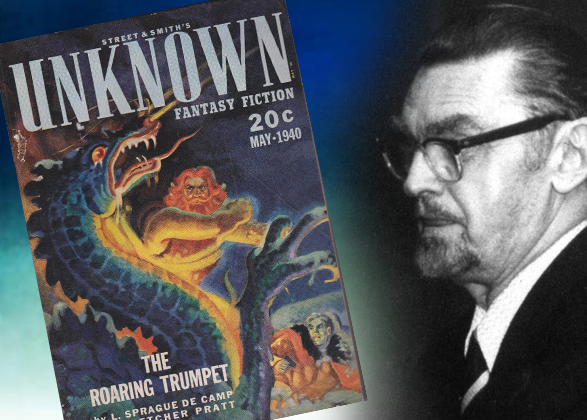 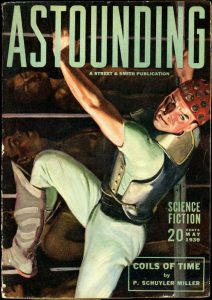 Did you know that L. Sprague de Camp coined the terms “extraterrestrial” and “E.T.”? It’s true! While the noun existed before de Camp, he was the first to use it to describe alien life in a 1939 article for Astounding Science Fiction. This is one of many examples of how De Camp’s impact on the genres of science fiction and fantasy far exceed his level of contemporary fame.

It is easy to draw a straight line between de Camp and the eccentric renaissance men who populate his stories. Besides authoring more than 100 books, he was also an aeronautical engineer, surveyor, patent expert, and a school principal, among other things.

His writing career began in the field of nonfiction when he published Inventions and Their Management in 1937. Later that same year his short stories began to appear in Astounding Stories and by 1939 he had published his first novel. By the mid-1940s he was already a prolific writer and joined the Trap Door Spiders, a males-only social club which Fletcher Pratt had formed so he could spend time with Dr. John D. Clark without Clark’s wife, whom they all detested. The invitation-only membership consisted of primarily writers and scientists and some of the more notable members included Isaac Asimov, Lin Carter, Lester Del Rey, and Theodore Sturgeon. 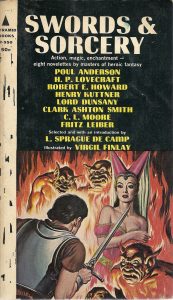 De Camp was a huge fan of the sword and sorcery genre and in 1963 he compiled and edited the first-ever collection of such stories in the book Swords and Sorcery featuring Poul Anderson, Lord Dunsany, Robert E. Howard, Henry Kuttner, Fritz Leiber, H.P. Lovecraft, C.L. Moore, and Clark Ashton Smith.

By the mid-1960s, he had become a founding member of the Swordsmen and Sorcerers’ Guild of America (or SAGA). It was started by Lin Carter, John Jakes, and himself and would eventually include many of the authors found in the Appendix N such as Poul Anderson, Fritz Leiber, Michael Moorcock, Andre Norton, and Jack Vance. 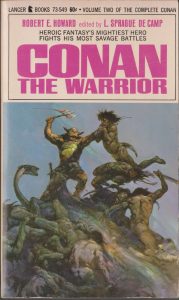 One of the ways in which de Camp had the most impact on the genre is through his work on the Conan stories. The works of Robert E. Howard had mostly fallen into obscurity but in 1966 he started working with Lancer to republish the Conan stories in the order in which they could have happened in Conan’s life (instead of chronological order by publication date, which the current Del Rey books do). The de Camp collections are often criticized by modern readers and Conan purists. De Camp edited and re-wrote the original Conan stories to make them fit with the internal chronology he was attempting to use. He converted non-Conan stories written by Howard and re-wrote them with Conan as the protagonist. According to de Camp, “it was mostly a matter of changing names, eliminating gunpowder, and dragging in a supernatural element”. De Camp and Lin Carter also wrote their own Conan stories (called “pastiches”) and intermingled them with Howard’s stories in the collections.

The early writers of D&D made no apparent distinction between the Howard Conan stories and the de Camp/Carter stories. In Robert Kuntz and James M. Ward’s OD&D supplement Gods, Demi-Gods & Heroes from 1976, magic items and entities from the de Camp and Carter stories exist with the original Robert E. Howard creations. From the very beginning of D&D, de Camp’s Conan is presented as canon.

Without de Camp reviving Conan for readers in the 1960s, we likely would not have had the iconic barbarian as a central figure in fantasy, forever altering fantasy fiction, art, RPGs, movies, and video games. You and I may never have discovered this mighty-thewed hero without de Camp’s hard work, controversial as it may be. 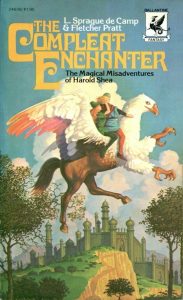 But de Camp’s influence doesn’t end with bringing Conan into modern pop culture. His own creations have had a major impact on fantasy as well. Gary Gygax has often sited the Harold Shea stories (which he wrote in collaboration with Fletcher Pratt) as being a major influence on the D&D magic system. Jack Vance gets most of the credit for the D&D magic system with the cast-and-forget system coming from “The Dying Earth” but the idea of material, somatic, and verbal components of spells comes straight from the Harold Shea stories. Many collections of these stories exist but the collection The Compleat Enchanter has all the stories published prior to the publication of the Appendix N and is definitely a must-read for those curious about the literary roots of fantasy gaming. 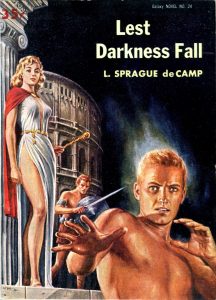 The Appendix N directly recommends the Harold Shea stories but it also recommends other de Camp titles by name: Lest Darkness Fall (a time-travelling alternate history), The Fallible Fiend (the humorous misadventures of a demon), and The Carnelian Cube (another romp through parallel worlds). Other notable works include the Viagens Interplanetarias series (sword and planet stories), the Pusadian series (inspired by Howard’s Hyborian tales), Tales from Gavagan’s Bar (barroom tall tales, also co-written with Fletcher Pratt), the Novarian series (his most innovative fantasy series), and The Incorporated Knight (a fantasy novel co-written with his wife Catherine Cook and published in 1987). 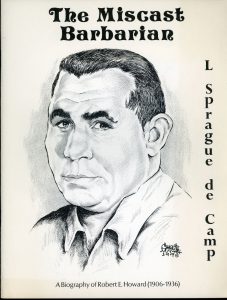 De Camp also served as the biographer for two of the greats from the Weird Tales era. In 1975, de Camp wrote Lovecraft: A Biography and in 1983 he wrote The Miscast Barbarian: a Biography of Robert E. Howard.

In 1996, at the age of 88, he wrote Time and Chance: An Autobiography which won the 1997 Hugo and Locus Award for Best Non-Fiction Book.

On November 6, 2000 de Camp passed away, three weeks prior to his 93rd birthday. Today is 111 years after his birth and we have an enormous body of work to explore and a legacy felt by all fans of genre fiction and gaming, even if his name isn’t as well-known as the other giants of fantasy fiction. 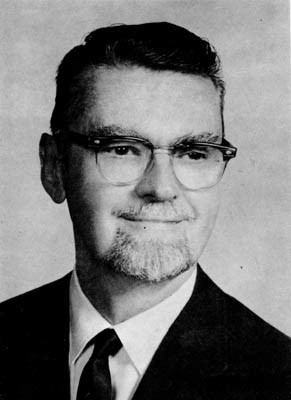